by Ilenya A. Marrin DSS 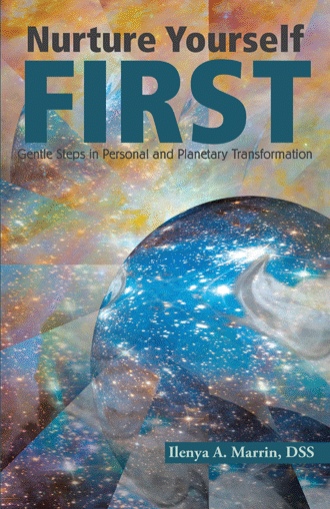 Nurture Yourself First provides inspiration and gentle, powerful steps for accessing your natural self-compassion, resilience and heart-centered wisdom so essential for thriving in today's world.

Far beyond occasional pampering, nurturing your multi-dimensional Self is now critical for joyful, purpose-filled living. Nurture Yourself First shows you how to share and care and climb your personal mountains without depleting yourself. Doable strategies can help you erase anxiety, drop overwhelm, bounce back from burnout, and release people-pleasing.

As you learn to observe, accept, forgive and love all aspects of yourself, inch by inch you consolidate your transformation. As you create space to live and love in fulfilment of your purpose, you naturally extend your personal empowerment to broader circles and uplift many others as we move forward in an age of living love.

Ilenya A. Marrin, MS, MA, DSS, author and inspirational speaker, shares from her in-depth understanding of spiritual psychology and practical spirituality, plus life-changing personal experience in the value of self-nurturing. She lives in Wichita, Kansas, with her husband, two greyhounds and two tortoiseshell cats.