How I Speak to God: Teaching Children How to Pray 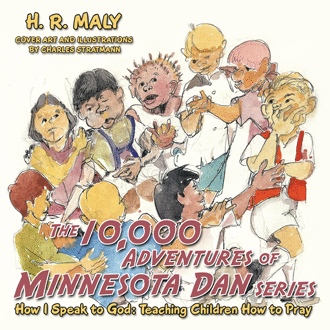 • Daniel Joseph Maly loved to play sports; in particular, swimming and football were his favorites. This true Minnesota kid loved the outdoor life, where he hiked in the hills, built tree forts, and camped in the forests. This is the second part in a series of books that transport young people on a journey that Dan either took or was planning to take before he lost a courageous battle with cancer. Dan, one of four boys in the household, had fun-filled times with his brothers, Tim, Matt, and Mike. They and Dan’s close friends enjoyed his adventurous spirit. Two other significant family members were their golden retrievers. The male, Rusty Bones, and the mom, Miss Megan, were cared for and loved dearly by all the boys. Rusty became Dan’s pal, and during the final days of Dan’s life, Rusty always stayed near his side. A number of years ago when Dan was quite sick, he spent a lot of time thinking and praying to God. He kept praying and asking for guidance from God regarding why he didn’t feel so good. He said that he learned a great deal about himself and about his relationship with God. The most important thing he learned was that God loves each and every one of us. We are all equal in the eyes of God. This book is the sixth in The 10,000 Adventures of Minnesota Dan series and is a prayer guideline book which is simple and straightforward. It suggests that when we pray, we are either saying thank-you for what we have in our lives or that we are asking for assistance with something that troubles us. Everyone prays to God in his or her own way, so this is just some “how to pray” information that might help you. Praying is how people speak to God the Creator.

In the first books in the series of The 10,000 Adventures of Minnesota Dan, we were introduced to Dan’s deep and abiding faith in God. When uncontrollable events prove fearful and scary to him, he prays to God for help and his prayers are answered. His faith is tested mightily: during a perilous canoe ride with Rusty, his golden retriever; followed by a voyage sailing through a frightening rainstorm; having a crushed bike wheel which threatens to end a long trip; and lastly, having a mystical experience while cross-country skiing in the Hiawatha Valley. In this sixth book, How I Speak to God: Teaching Children How to Pray, Dan explores a simple way, through prayer, how to communicate on a personal level with God, The Creator. In memory of Barbara LeBuhn, keeping her close in our hearts. Timothy Maly and Malik Maly With sincere appreciation of your kind support for The 10,000 Adventures of Minnesota Dan series of children’s books.