Emissaries of the Order of Melchizedek 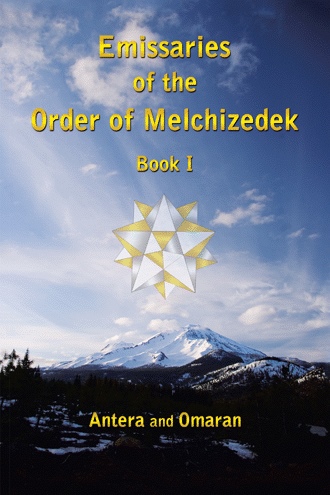 1. THE MOUNTAIN CALLS Antera and Omaran loved Mount Shasta, there was no doubt about it. A majestic volcano in northern California that rises to over 14,000 feet elevation, it is a spiritual vortex of massive proportions, and draws spiritual seekers to it like a magnet. Mount Shasta City, a small alpine town of 3500 people, is nestled into the southwest side, where the energies are the highest and most pure. Ever since their spiritual marriage on its slopes in the spring of 1994, they had known it was a special place that resonated with them and their life together. It was only a five-hour drive from their home in Mill Valley, north of San Francisco, and they went there as often as they could. Now, in 1998, the day after their legal marriage, which was also held on the mountain, they were already thinking about looking at property so they could move there. On this trip, just to see what was available, they went to a realtor in town, who gave them a list of houses for sale. They drove by several but none really drew them in. As they drove around, they noticed that some areas were much more desirable than others, and they learned more about the area. That afternoon they were in Berryvale, the popular natural foods store in town, picking up some food for dinner. Omaran saw a friend and went over to chat. He seemed to make friends anywhere he went and already knew quite a few in the small town. He talked about their wedding the day before, and how they were now interested in finding a house so they could move to Mount Shasta. A woman nearby happened to overhear the conversation and came up, introduced herself, and said that she had a property she wanted to sell, but it only had a yurt and a small cottage on it now. Omaran got her address and made an appointment for the next day. When they arrived there, they immediately loved it. The property was beautiful! Tall oak trees towered above, there were walkways lined with irises, gardens, and even a special area dedicated to Mother Mary. It was 1.5 acres, and looked like a park. The owner lived in the small cottage on the property while she worked on it, because she had torn down the main house. They left with visions of the lot dancing in their heads. “What do you think? Will she sell? She seemed unsure, like she didn’t really want to,” Antera said as they started their drive back home. “We’ll see. I love it. And much of the work is already done to the building site—the trenching, electrical, water. We’d have to use the existing foundation.” He was already thinking like the builder he was. “The only thing is, the nature spirits seemed unhappy that she is thinking about leaving. Some of them came to me when we were in the garden near the big oak tree, and they seemed very disturbed. I wonder what that is about.” Since she was a small child, Antera had been able to communicate with non-physical beings, and throughout her life she had benefitted from the profound teachings she received from Beings of Light. They had been her biggest supporters, mentors, and personal teachers through this lifetime. Over the last five years, since she and Omaran had been together, he had also reaped the rewards from her unseen connections in “high places,” learning the most important lessons directly from the many great Masters who talked to and through her. Antera considered it normal, though she knew that others didn’t have that ability and must be living in a reality that is extremely limited, like being blind. Throughout her previous career as a seismologist, and all the scientific training she’d had, it had been best to not talk about her mystical side, though she knew that most big scientific discoveries came through intuition. She had learned how to turn the connection off and on as needed so it did not distract her in everyday life. It was ideal that Omaran was on the same spiritual path. He said, “Hmmm. Well, let’s ask the Masters about the property when we get home. I have a feeling they like it. Nature spirits will cope.” He quickly amended, “That sounded pretty harsh—I didn’t mean it like that. We’ll talk to them, of course.” “Yes, I suppose they will cope.” She sighed. “You know, I really don’t want to go back to the Bay Area. I want to stay here. Maybe we can make the move sooner.” “I love it here too. As soon as we find a place, we can make it happen,” he said. “Would you really want to build a house? It seems like such a big project! I know you have done it before, but wow . . . .” “The building site is already prepared there, so that makes it easier. In fact, I’ve never built a house for myself. This would be the first. Imagine designing and building a house that is perfect for us!” They arrived home after being gone for a week, and now here they were, actually married! What a journey it had all been to this point in time. From meeting in 1993 and discovering they were twin flames, to working through and overcoming many obstacles to their reunion, and finally to now, getting married, five years later. 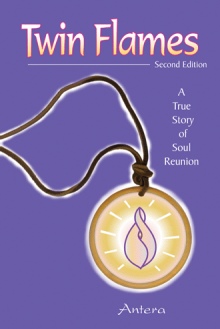 What is it like to live in the physical world while serving the Light Beings in charge of humanity's evolution?

In this long-awaited sequel to Twin Flames: A True Story of Soul Reunion, Antera and Omaran continue their exciting adventures together as they take on tasks given by the Order of Melchizedek, a cosmic order that guides the evolution of consciousness. Some assignments are challenging, some are fun, and all are opportunities to gain wisdom, heal, and serve humanity and the Earth.

Ascended Masters such as Mary, Isis, Jeshua, and St. Germain-as well as a host of angels, devas, and nature spirits-play a big part in this true story as they lovingly guide this twin flame couple.

Antera and Omaran have been together since 1994. They founded the Center for Soul Evolution Mystery School, Land Healing Project, and built the Mt. Shasta Pyramid. Guided by Beings of Light, with whom Antera has been able to communicate since she was a small child, they now help the evolution of humanity through classes, initiations, music, and writing.