And How You Could Star in Yours 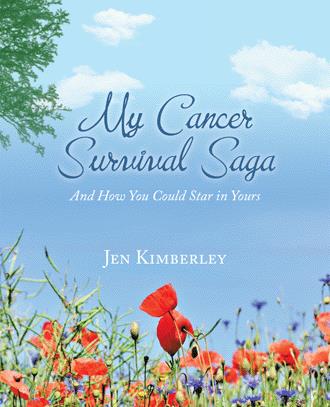 Author Jen Kimberley was building a life for herself in Denver, Colorado after the death of her husband from lung cancer when she was accidentally diagnosed with leukemia. In My Cancer Survival Saga, she shares her personal story.

Her narrative covers mistakes she made, things she learned the hard way, and people who helped her. It describes her first encounters with alternative cancer treatments such as IPT and hyperthermia; her changes in diet and lifestyle that removed toxins and increased oxygen levels; and the weight loss and weakness known as cachexia and coming out of it alive and strong despite conventional predictions. In sidebars, she offers helpful and educational information for readers who want to know more about treatment options other than chemotherapy, radiation, and surgery; and she teaches how best to work towards a cure rather than just remission.

Along with one of Jen's entertaining poems, My Cancer Survival Saga also offers five sections on energy work to start clearing, validating, and protecting your own space. These include specific tools anyone can learn to use that remove stress and increase personal confidence.

Jen Kimberley has had leukemia for nineteen years, nine years beyond her official “shelf life”. She started with eight years of conventional treatment and went on to have alternative treatments in three countries. She’s now treating herself on the home run. For information on how she’s doing this, please see www.jenkimberley.com and the Facebook page she’s starting to create. Kimberley is a dual citizen, Australia and the United States, mother of two sons, and has mostly worked as a writer and editor.