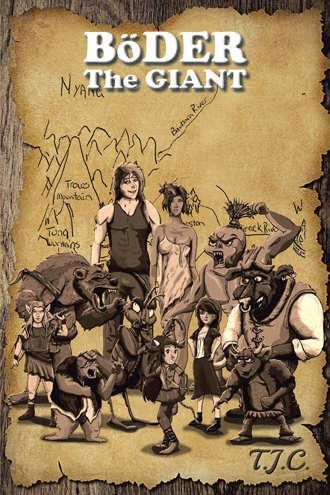 In this fantasy novel, a giant named Böder sets out to prove his worth through a series of challenges and adventures across the continent of Durogg which is populated by manimals – those who are half human and half animal. Some years ago, these people had worked to rid themselves of Böder, a ten-meter-tall giant pest. The stories say he had been marauding among their farming communities and consuming everything is sight. But the truth, as always, is a little bit more complicated than that.

Böder has been outcast and exiled to live on an island in the middle of a large river, when an opportunity arises that might help him to redeem himself. Although the populace at large distrusts and fears him, a merchant in need of a rambunctious giant seeks him out for assistance.

So Böder, along with friends and family, sets out on a series of adventures in which he receives help from a princess, deals with some trolls, fights in the arena, faces giant reptiles, Locustmen and pirates and recovers a vast treasure. Whilst along the way he seeks to win the hearts of both a community and a lovely giantess.

But only time will tell if Böder can ever fully redeem himself!

T.J.C. has lived in Canada, Zambia and England and currently resides in his home country of Australia. He has worked in a variety of fields from professional driver including cabs, buses and trucks to chef and restaurateur. T.J.C. has always had a passion for people and for stories in both print and films.