It’s Part of Who I Am 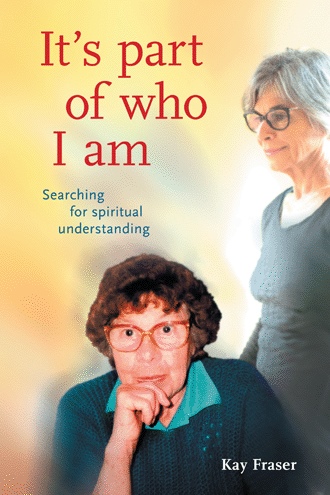 It’s Part of Who I Am: Searching for Spiritual Understanding tells the story of one woman, Peace, who relentlessly seeks out spiritual understanding. Her daughter, Kay, explores the complexities involved in the life of her mother. She, in turn, finds that her exploration leads her to embark on her own spiritual journey.

Kay Fraser—who holds a PhD in social history—brings her academic background to this intimate and personal account that follows Peace on a fifty-five year journey through many twists and turns. Peace begins with Christianity and then moves through a variety of teachings—Gurdjieff, Krishnamurti, the Theosophical Society, Co-Freemasonry, and ‘A Course in Miracles’—before turning to Zen Buddhism for two decades. Finally she returns to the Christian Church.

Her return to the church gave rise to many questions and answers between mother and daughter. Whenever Peace was asked why, after all her searching, she had returned to the church she would simply say “It’s part of who I am.”

If you are drawn to other people’s accounts of their spiritual journeys and wonder what insights they can provide for your own journey then It’s Part of Who I Am: Searching for Spiritual Understanding will give you some clues about how to find that deep spiritual core within. Yet, it also gives hints about how not to travel on your own journey.

Kay Fraser was born in Auckland, New Zealand. She moved to London in 1968 and by 1982 was living in Sydney, Australia. She met her husband here and they moved to Tamborine Mountain, Queensland in 1999 where she has lived ever since.

Kay received her PhD from The University of Sydney in 1997 and has had two books published. In 2012, A Remarkable Gift: 100 years of the Walter & Eliza Hall Trust and in 1999, Same or Different: Gender Politics in the Workplace.