Medicine: In Search of a Soul 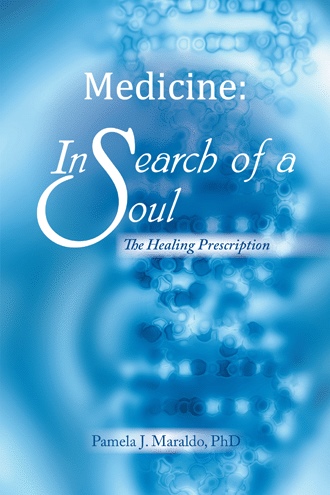 Xl. Healing in the Quantum Hologram Power Step: become that which you desire to be. Live in that state….make it come alive in you. “There is one original, formless substance from which all things are made. In its original state, it permeates, penetrates and fills the interspaces of the Universe. A thought in this substance produces the thing that is imagined by the thought. A person can form things and can cause the thing he thinks about to be created.” Wallace Wattles “Reality is merely an illusion; albeit a persistent one.” Albert Einstein Before discussing what a hologram or a holographic universe is, a little warm up is in order. One morning in a quaint little church in East Hampton, suddenly---in a flash--- everything around me shifted into one continuous, vast two-dimensional space. People and objects with no clear boundaries all blended together into an immense, continuous, flat surface, a surface with height and width only. It looked like a continuous mural. No depth. Depth came only when I focused on one aspect of it. My focus made it “pop” forward into three dimensions. I was being shown how our perceptions, through our senses, bring something to life. Our senses act as 3-D glasses. We create whatever we’re focusing on with our senses. Settled into the peace and serenity I found there, as I listened for guidance about my next career move, whoosh! As if my senses were binoculars, things zoomed into being! First the priest and the alter popped into three dimensions as I gazed at them. When I stopped looking at them, they receded back into the flat background. When I focused on the organist, she and the organ burst forth in 3-D… just as the priest and the alter had. Something supernatural was happening…. I was so deeply moved down to my core by the experience, tears poured out for a long time. I took it all to mean that I was being given an answer to my career question. But none of it really made sense until years later when I read David Bohm’s concept of a holographic universe. That experience helped me to “get” what Bohm was saying: While our physical experience is dominated by hard objects that seem to be separate and have clear boundaries, this is far from the case. What physicists like Bohm and others have discovered is that at the quantum level, an ocean of waves of probability flow constantly. It is only when we make an observation, when we focus on something, like the priest and the alter, that the wave function collapses, and we see solid specific, physical people and objects. In this way, we create through our senses; we bring things to life. The Hologram: Our Primary Reality What we focus on comes to life as a hologram does when light illuminates it. Bohm imagines the Source as coherent light which illuminates the vast unlimited space of all that is unseen”. He named this unlimited, unseen space the implicate realm. As it is illuminated, it gives rise to the physical world we see through our senses. Bohm called the world we see the explicate realm. This view of the Universe according to Bohm is super-holistic and unified; very different from a universe of separate parts modeled after Newton’s clockwork universe . Bohm thought of our consciousness as an essential feature of the holomovement, and our senses as the lenses through which we bring things into reality. When we see through the lenses of our senses, it’s like wearing 3-D glasses in a movie theatre. Bohm considers this holomovement to be our primary reality, “the implicate order”, or the invisible substance from which the physical world arises. Several of the most prominent scientists of our time in addition to Bohm, have also advanced the idea that there exists a special energy, an “immense background of energy” that is one whole and unbroken movement. In fact, way before our time, Leibnitz, the discoverer of integral and differential calculus, also held the view that a metaphysical reality underlies and generates the material universe . Dr. Tiller, prominent physicist from Stanford, agrees. Describing how humans can shape matter, says Tiller: “By the entity’s thoughts, attitudes and actions, transformational changes occur in the dense and subtle matter which can produce a refined structure in the matter.” Tiller believes we’ve entered a stage in our evolution where we’re heading in the direction of developing the capabilities that will enable us to consciously manipulate space, time and matter. “By the entity’s thoughts, attitudes and actions, transformational changes occur in the dense and subtle matter which can produce a refined structure in the matter.” W.A Tiller Ken Wilbur, who has been called the Einstein of consciousness, also agrees. He specifies that this “immense background of energy”, is the realm of the spirit, and it is our primary reality: “The material realm, far from being the most fundamental, is the least fundamental; it has less being than life, which has less being than mind, which has less being than spirit.” What we believe, what we feel inside, makes an energetic imprint on this holomovement. Because everything is vibration; changing this imprint by changing our beliefs and feelings, can change our physical world. That’s why all the mystics say of the reality we live, “As within, without.” In other words, the beliefs and feelings inside of us determine what we focus on and what we perceive in the physical world. When two people look at the exact same objects or circumstances, they see very different things. From this perspective it is said, “When you change the way you look at things, the things you look at change.” As we change our thoughts, feelings, emotions, we change matter. How? By impressing different energetic frequencies on the holomovement. What we believe, what we feel inside, makes an energetic imprint on this holomovement.

We are taught that external conditions or people are to blame for our illnesses and pain. While other people and situations can affect the quality of your energy field---it is within your power to train your mind and emotions, and adapt your inner feelings, to let go of whatever is hurting you. Essentially, all you have to do is raise the frequency of your energy field. You are---we all are---an energetic reflection of your own attitudes and feelings. Whatever you focus on is brought to life. Our brains are holographic, living in a holographic universe. Our physical world is made solid by our senses, as if you put on 3-D glasses. New scientific studies tell us that the observation of a particle is what makes it solid. The tangible is born of the intangible: our thoughts, attitudes and feelings, as well as our physical bodies, are a reflection of the quality of our energies, our vibrational resonance....our consciousness. There is nothing that can’t be healed, if you can change your frame of mind, and the way you feel.

Dr. Pamela J. Maraldo currently serves as the CEO of Girls Inc. of New York City. She has also served as President of Planned Parenthood Federation of America and the National League for Nursing. Dr. Maraldo has served as a consultant for many health care concerns, including: The National Cancer Institute, the NYC Department of Health and Mental Hygiene, the Visiting Nurse Service of New York, United Health Care, Merck Pharmaceuticals, Pfizer Pharmaceuticals, National Association of Women’s Health, the Centers for Radiation Oncology, and the New England Medical Center.