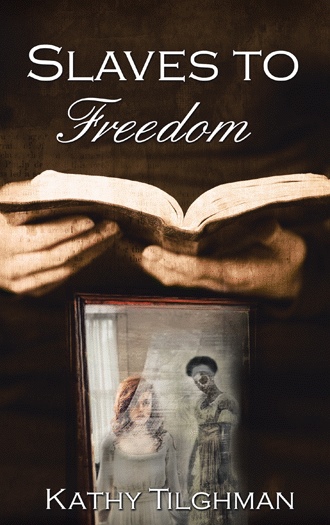 Matilde pulled her tattered shawl around her shoulders as she braced herself against the crisp, September temperatures of dusk. Before she opened the door to her shack, she spotted Nathan as he shuffled in the line coming back from the fields like an obedient child afraid to get out of step. He looked more serious than usual.

Later that night, they ambled toward the river, and she sensed his tension as he rolled and unrolled his shirtsleeves.

“Nathan, why yo' fiddlin' with yo' shirt that way?”

“I watched Mast' whip a man fo' the las' time today. Charles didn’ harves' his share-a tobacco leaves and the mast' heard 'bout it. I couldn' stand his whimperin'. I nearly los' my temper and grabbed that whip to save 'im. 'Tilde, I won’ watch it again. Eve'.”

She swallowed hard and knew what he meant. “No, not this soon, Nathan, please.”

“There won' eve' be a good time, 'Tilde. 'Member I tol' yo' when I proposed: someday we gonna live as a free family. Well, time's come to find out if we can."

"Oh Nathan, don' make me leave without mama and grandmama."

Matilde stared hard at him. "We riskin' everythin', Nathan. We might not even live to have that chance."

"I know the chance we takin'. But ain't no life here no mo'. Nev' was. Now we gotta try. Else we nev' know if we could make it. We deserve riskin' findin' out."

"All right, then we go 'morrow night. When Charles got brought back from runnin', he tol' me 'bout the path along the Gunpowder River. Raft is hidden in the brush there. After the cook fire burns out Saturday night, meet me by our willow tree. It be Monday mornin' 'fore Mast' know we gone.”

As Matilde solemnly watched the flickering flames of the cook fire turn to ashes Saturday night, she memorized every detail of mama and grandmama's faces. When a piece of wood popped in the dying embers, she jumped from the log where she sat.

She said to them, "Guess I mo' tired 'an I thought." She kissed them both and went to her cabin alone. She fell into a fitful sleep until she heard the cabin door open and mama and grandmother went to their mattresses.

When Matilde heard their rhythmic breathing, she stole out of the cabin with the gray satchel she had packed earlier that day: a jar of cayenne pepper stolen from the kitchen to throw the dogs off their scent, a torn blanket, bread, and the book and pen Sarah had given her.

Awash in the anguish of leaving, she glanced at them a final time and her resolve to get them to freedom someday buoyed to the surface. She closed the door softly and ran on the moonlit path to the willow.

He stepped into her path, grabbed her hand, “Run, 'Tilde! We gotta lot of night 'head of us 'fore we git to the Gunpowder.”

They ran beyond the entrance to the plantation, past oak and maple trees, branches snapping and crunching beneath their feet. They ran parallel to the river careful to stay within the boundary of the forest. They ran breathless through the night until their calves ached, their feet blistered and sore, and wind gone from their lungs. They ran until the sun peeked over the horizon and shed its first rays of light on the river.

When he saw a corner of a white handkerchief sticking out beneath a rock, he stooped and picked it up. It was a crude black drawing that showed woods across the marsh and a raft concealed beneath brush. Nathan stuffed the handkerchief beneath the rock for other fugitives. “Look it this, 'Tilde. We able to fin' the raft now. Can yo' make it past the marsh?"

She nodded tentatively when she saw wheat colored reeds protrude above the briny colored marsh water a few feet from her.

“Stop," Nathan demanded as he threw his arm across her path. "Copperheads 're here---they poisonous.” He grabbed two thick branches from the surrounding brush to use as poles and handed one to her.

“Use yo' pole. Daylight’s here an' we gotta get as deep in those woods, soon as we can. I go firs'.”

“No, Nathan, I can' do this. Isn’ there 'nother way?” she cried, desperately looking beyond the marsh. "Let's go back."

Matilde gulped back tears at the stern look on Nathan's face when he turned to her.

Hearing the urgency in his voice, she took his hand and he guided her into the mosquito-laden water.

Matilde dug her pole into the mud and squished her feet into the murky bottom. Slowly, she waded up to her knees, her soaked dress clinging to her skin. She watched Nathan as he steadfastly poled past loose branches, swamp grass, leaves and reeds before he got to the bank.

Matilde hurried out of the water and brushed past him onto the bank. She gasped, out of breath, "Can we rest now?"

Matilde heard bloodhounds thrashing across the water and squelched the impulse to flee; instead, she stood frozen, staring in the same direction as Nathan. Sitting on a rock, not five feet from her, was a coiled copperhead, its brown diamond markings serving up a warning in the early morning sun. “No,” she cried, clasping her mouth to stifle a scream.

Nathan raised his walking stick over his head and hurled it at the snake's head but missed. As it slithered into the water, Nathan grabbed Matilde's hand and yanked her toward a patch of dirt that led into the woods. She turned and saw Kensington and his Negro overseer, Jonas, whipping their horses to keep up with them. Nathan jerked her forward. “Hurry!”

Kathy Tilghman recounts the turbulent times of antebellum America through a friendship between two women: a black slave and an Irish immigrant. Both travel the Underground Railroad but neither knows the sacrifices that will be asked of them to achieve the freedom they desperately want.
This is a beautifully written historical novel. Pat T.

The story moves at a fast pace and I could not put it down. Toni D.

This is an adventure packed novel where the characters choose healing over wrong-doing that adds depth and credibility to the novel. Gabriella K.

Two powerful stories that can never be told enough. E.B.M.

Kathy Tilghman began researching Slaves to Freedom while writing her book, A Vision of Freedom: African-Americans and the United States Capitol. She became fascinated with stories of survival on the Underground Railroad and also with tales of Irish immigration to the United States during the 1850s. She lives in Parkville, Maryland, and is working on the sequel to Slaves to Freedom.