An Odyssey into the Quantum Field with Oscar the Cat

by Commander Gerald Bunch US Navy (Ret.) & With Gabriella Gafni 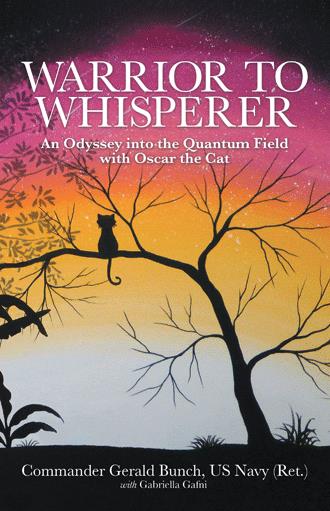 “Gerald, this is Bonnie” (As is the case throughout this book, this is not the real name of the client or the animal). “Please help me. I’m desperate. Abe left home three days ago, and I can’t find him anywhere. He has never done this before. I’m so worried. Can you help me?”

That was the beginning of a phone call I received on a bright, sunny autumn afternoon a few years ago. Bonnie is a woman for whom I had done animal communication several months prior. She lives on the other side of the country from me, and I had never met her or her cats in person, but when operating in the quantum field, time and space are not factors. Physical contact is not required to communicate. She had been referred to me by a friend of a friend because one of her four cats was urinating outside of the litterbox, and another was being a bully to the other cats. At that time, I had connected with her two problem cats, as well as her other cats, one of whom was Abe. The earlier problems were resolved, but now another issue had arisen: Abe had left home.

When I asked her if anything different or unusual was going on in her house, Bonnie told me her son and daughter-in-law had been visiting for the past week. Abe did not seem to like her son at all. As a result, Abe avoided him altogether. She added that her guests were leaving that day, moving to the west coast, and would probably not be back for a long time. She wanted to know if I could contact Abe, tell him that, and ask him to come home.

Lost and runaway animals are the most difficult cases for communicators to handle, and many communicators will not take them. In many cases, the animal has died, and there is nothing that can be done. Sometimes the animal is so lost it doesn’t know where it is, so even contacting the animal does not establish where they are or how to direct their guardian to find them. Then there are cases when an animal does not want to be found, has a reason for having left home, and wants to stay away. This seemed to be the case with Abe.

I told Bonnie I would contact Abe and see what was going on with him. Having talked with Abe before, I reviewed my notes and remembered he was a bright and cheery little guy who had an excellent relationship with his cat housemates. It was also clear that Abe dearly loved his person, Bonnie. He was an indoor/outdoor cat, which meant he could come and go as he pleased, but Bonnie always called him in at night. In the past, he had always come home.

I will go into more detail later, but basically to communicate with an animal, I do a short meditation to quiet all of the chatter or “self-talk” in my mind. I also use a photograph of the subject to help me focus on that specific animal. Once I have focused on the animal in question, I begin the conversation. I always start by asking if I may talk to them.

After all, most of us humans would not just walk up to someone and start chatting away unless we knew the person we’re conversing with fairly well. It’s the same with all species. Courtesy, caring, and a slow, relaxed, non-threatening approach are the best ways to establish a rapport. As I communicate, I write down my questions, as well as the answers I receive from the animal.

So I contacted Abe and was relieved to hear from him that he was safe and healthy. Once we established that, I asked him when he intended to go home. I will never forget the sad, plaintive answer of this dear soul. He paused for a moment, and then quietly said, “I don’t have a home.” I assured him he most certainly did have a home, that Bonnie was very concerned about him and that she was extremely distraught that he was gone. He repeated his earlier assertion that no, he did not have a home. When I asked him why he felt that way he explained because “that person” was there he could no longer live there. I asked him to show me the person who was there. I got a vision of a man of medium height and weight, about five feet nine inches tall and about one hundred sixty pounds, with dark, short hair, medium complexion, wearing jeans and a buttoned shirt. In a later conversation with Bonnie, she said this was an exact description of her son.

Next, I asked Abe if he was lost or if he knew how to get home. He answered that of course he knew his way back to the house. After all, he was an outdoor cat. He had roamed the area many times, and knew his way around. I then asked him if he had enough food and water. He told me he did, and that he had been getting food at the house of friendly human. I asked him to show me the house, and I got a vision of a white house with blue shutters and a fence around the yard.

Having established that he was safe, well fed, and knew where he was, I told him that the person he did not like was no longer with Bonnie. I informed him the person had left and would not be back. I let him know his home was there, his cat friends were all there, and that Bonnie truly loved him and wanted him to come back. He seemed hesitant to accept all of this, so I asked him if he would be willing just to go to the house, stay outside, and check it out. He told me he would think about it. I again told him how much he was missed, how much Bonnie loved him, and how worried she was. In my experience, animals like to be told how much they are loved over and over again. Then again, isn’t that true of humans too? I said my goodbyes and closed the connection.

I called Bonnie and reported the conversation to her, reading my transcript word for word. She confirmed the description of her son and said she was pretty certain she knew the house where Abe was being fed. She assured me she would keep an eye out for him. I only had to wait about three hours for an update. “Guess who just came up to the house!” Bonnie exclaimed with a combination of joy and relief in her voice. “Abe is back!” About an hour after that I received an email with a picture of Abe lying on Bonnie’s lap.

So, how did all of this happen? By formal education, I am an engineer. The idea of communicating with a different species on the other side of the country is something I would never in a million years have thought possible when I completed college and started my career. I have learned many things in the years since I graduated from the Naval Academy and flight school and subsequently went to war. I never thought I would learn that all life forms are intelligent, sentient beings with complex lives, thoughts, and emotions. I never imagined it could be possible to communicate with all life forms through the zero point energy of the quantum field. I certainly never thought that it would be possible for me to do that on a regular basis.

How does animal communication work? Well, how it works doesn’t matter nearly as much as the fact that it does work. It is also worth noting that this is not a unique “gift” given to a few anointed ones. The ability to communicate with other species is a capability with which we are all born. As we learn spoken language, this ability retreats to the back of our consciousness where, for most humans, it lies dormant. However, animal communication remains a capability all humans can re-learn, and anyone can master.

Later in the book I will write about how I learned to communicate and how it works, but again, the how is not as important as knowing it does work. To draw a parallel, one would not have to go too far back in history to the time when flipping a switch on the wall to illuminate a room would have been viewed as black magic. Even now, most people do not know how that works. They just know it does, and it happens every time they flip that switch.

Did you ever look into the eyes of an animal and wonder if they could understand you? Have you ever fantasized about how great it would be for you to understand what they thought? In this fascinating book Gerald Bunch relates his journey from Naval Officer/engineer/left-brained empiricist to intuitive animal communicator.

He explains that intuitive communication is a capability we are all born with and we can each re-learn. In sharing many of the conversations he has had with various species, he takes us into the world as experienced by animals. He describes how we can deepen the bond we have with our animal companions and how their love and devotion to us can change our lives.

His study of quantum physics helped him bridge the gap between hard science and telepathy, but he stresses it is not necessary to know how animal communication works, only that it does work. All the time.

Gerald and his buddy Oscar the Cat are on an odyssey. Their passion is to make the world a better place for all of its inhabitants.

Commander Gerald Bunch, Naval Academy graduate, holds two graduate degrees. He spent his career as a pilot in the navy and commercial aviation. He has successfully communicated with thousands of animals of various species. He lives with his wife, Catherine, and their four cats in Las Vegas and San Diego.