THE POWER OF INFINITE JOY

self-knowledge through Spirituality and Science 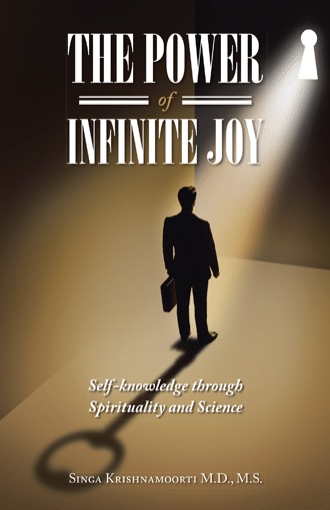 Not knowing who we really are, that is self ignorance is the cause for all human suffering. This ignorance leads to mistaking the phenomenon as the real and the real as unreal. When the unreal is given the value it does not have and preference it does not deserve it naturally results in unfulfilled desires and unfulfilled expectations the basic cause of human suffering. The security and peace that human beings are searching for, will never be obtained in the changing reality of the empirical world. This means ignorance causes insecurity and insecurity leads to desire for security and the desire ends in action and actions bring in good and bad consequences. No one avoids the good but attempts to escape the bad in a phenomenal world or the empirical world is an impossible and unobtainable task. The outcome of this is never ending insecurity fear anxiety depression etc.

What causes self ignorance is mistaking the Ego as the real self. We need the unreal Ego to interact with the empirical world. Proper understanding of this Ego is an absolute necessity for the prevention of unhappiness. The empirical world can provide only transitory joy or security. For lasting peace and happiness the knowledge of the real self and abidance in that knowledge is essential and that is addressed in this book.

All living beings are a mixture of Spirit and matter. The Spiritual part being extremely subtle it is not available for observation as an object although it is experienced all the time. The matter component is available for our scrutiny and humanity has been searching for the truth in this matter principle which has the appearance of real but its reality depends on the observer who lends reality to the unreal without being aware of this fact. It is like experiencing the objects of the world and ignoring the light which lends reality to the objects. Objects do not reveal themselves and they depend on the light for their experience. Similarly all objects that take birth from matter which includes our body mind sense complex do not have the capacity to reveal themselves. They depend on the consciousness principle of the Spirit for their illumination.

The matter principle in the living beings especially the brain has cells that are capable of reflecting consciousness principle of the Spirit. This reflected consciousness then pervades the entire being making the mind as the seer called the Ego and this Ego perceives the objects of the world through the illuminated sense organs and then the Ego parades as the doer and the enjoyer when it relates to and interacts with the objects of the world. This is the second incidental changing experiencer. How the unreal Ego dominates the real is by virtue of its relationship with the material world at the expense of the Witness consciousness is explained by several examples in this book.

Most of the confusion in psychology and psychiatry rests in this area. The second experience, that is the experience of the Ego the dominant experience is regarded as the real experiencer "I am" by mistake. In the absence of proper understanding of the mind, infinite consciousness is reduced to the finite Ego level. Treating the afflictions of the Ego will not render permanence. This does not mean one should not treat the problems of the Ego but the temporary nature of the response should be recognized. This point is elaborately discussed by indicating the incidental attributes change constantly which is not the real self and the knowledge of the real self the changeless Witness consciousness enables him to create a distance between the real and the unreal. This distance reveals his higher order of reality and its advantages are elaborately discussed.

Further clarification of what real is, will aid the comprehension of the above statement. It is common knowledge that the real is unaffected by space time and the unreal is bound by space time factor. All the dealings of the Ego the mind is with the empirical world only. Empirical world is subject to constant change. Mind is the generator of space time. In deep sleep where the mind is inactive the space time is absent indicating that the mind dwells in space time thus confirms its ephemeral status. Whereas the consciousness is free from space time unaffected by changes which is our intrinsic nature thus indicating the potential for permanent joy in the knowledge of the real self. This is the main topic and how to accomplish this is addressed.

Finally a word of caution, one should not construe that gaining self knowledge will remove their problems instantly. After gaining self knowledge one has to replace the old habits with new habits based on the new knowledge. By practice one can accomplish this. An illustration may be of help. Like in a theater the actor plays many roles based on the script as a gambler, a hobo, and a king. By practice he perfects his skills. Let us take a hobo, in this role he wears clothes with patches ill fitting and shabby, eats food from garbage cans sleeps on cardboard wrapped around with thrown away newspapers and entertains his audience and makes them laugh. While playing this role he not only knows that the role is not his real self but also all the difficulties encountered in that role belongs to the role only and not to the real self. Knowing this fact he play the role very efficiently and by practice he improves his skills where he can get awards and very high rewards also.

The purpose of this book is to emphasize that human beings are not of dust alone, but they are a mixture of matter and spirit. The matter is enlivened by the Spirit. The enlivened matter principle known as the mind or the ego is mistaken for the spirit. This misunderstanding leads to confusion as to who we really are. By this mistake, the problems of the ego are attributed to the spirit. The spirit is a nonmatter, changeless principle, whereas the matter is subject to constant change. This is very evident in the expression, “I am a human being.” Here the “I am” is the changeless principle, and the human being who plays many roles is the changing principle. A clear understanding of the above two principles and how they can bring immense relief to the suffering mind are elaborately discussed in this book.

The author’s interest in understanding mind dates back to his childhood molding him to be what he is today. In his teens he was blessed to be in the presence of Sri Ramana Maharishi at Arunachala and spent three days with Sri. Sivananda at Rishikesh before leaving India for post graduate work in psychiatry at UK under Professor Hamilton who is famous for depression scale and did two years course for diploma in psychiatry at the University of Leeds. To further his training in psychiatry he did residency at Boston City Hospital with teaching fellowship at Harvard, Mass., USA. In Iowa he did his MS in psychiatry under Paul Huston and Charles Shagass. In Washington in addition to hospital practice in psychiatry he held faculty positions and also private practice as part time. In California he worked for the VA health care system at Palo Alto.

On Spirituality he listened to series of lectures on important topics by Swami Chinmayananda, Swami Dayananda Sarasvati and his disciples. This enabled him to introduce new concepts to the healing of the afflicted mind. The benefits of Spiritual knowledge in addition to the knowledge of phenomenal world can free the suffering mind from various maladies including fear of death etc.