A Soul Journey with Chronic Illness and Disability 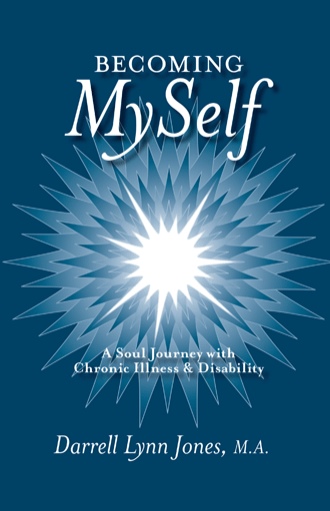 Your life is a series of opportunities to become yourself.

Those of us who live with chronic illnesses have unprecedented access to healing modalities and live in an age where pursuing consciousness and the meaning of life, including trying to understand the experience of chronic illness, are no longer questionable pursuits. We are in ample company if we want to find healing and purpose.

Physicians have a lower risk of losing their medical licenses if they practice integrative and holistic medicine. And what more real indicator could there be than to have a highly acclaimed television doctor such as Dr. Oz talking freely about herbs, yoga, and acupuncture to a huge following of eager students? Dr. Oz has his detractors, but they may discover it’s very hard to stop an idea whose time has come. Popular spiritual thought leaders such as Oprah Winfrey, Wayne Dyer, Caroline Myss, Eckhart Tolle, and Ram Dass have opened doors to territories that many of us quietly explored for years, hoping it would someday become acceptable for us to explore them openly. And so it has.

Many of us who experience debated and disputed conditions such as fibromyalgia (FM), chronic fatigue syndrome (CFS), multiple chemical sensitivity (MCS, which is also known as environmental illness), and a number of other invisible chronic illnesses operated behind closed doors in both physical and spiritual realms for a long time because these illnesses were viewed with skepticism. Doctors, counselors, family members, friends, employers, and coworkers dismissed us. We were told our symptoms were imaginary, psychological, or exaggerated. Some people said they were a spiritual failing.

Illnesses such as MCS and Gulf War Syndrome became political wherein some of us have been involved in policy arguments about indoor air quality in public places or have attempted to access medical benefits and services that we believe we have a right to. In this process, some of us sensed that we had lost a part of ourselves because we felt rejected and invalidated as human beings. Some of us have dealt with two layers of realities: the body-wide pain, fatigue, neurological and cognitive dysfunction, chronic infections, food sensitivities, digestive problems, and a host of other physical and mental symptoms on the one hand and an apparent lack of useful support on the other.

These types of illnesses can be terrifying, maddening, and awful to live with. The systemic effect on nearly every bodily function can make us wonder if we will be able to get through the day. Some of us are confined to our homes or even our beds. Those of us who are well enough to get out and about may feel like we’re negotiating a minefield, dodging chemicals, activities that deplete us, and comments that wound us.

Where specific recommendations for treatments and protocols have been forthcoming, we have found a mountain of information, but it is often conflicting, expensive, and not covered by insurance. It can be confusing, especially when viewed through a brain-fogged mind. When suggested treatments have been covered by insurance, we may have found that we couldn’t tolerate the prescribed medication or that the cure was worse than the disease.

Where treatments have not been recommended, we have often been on the receiving end of comments about the psychological nature of the conditions. Doctors may have said, “You just need to relax,” “Have you considered counseling?” or “All your tests were negative.” That one usually ends the discussion.

People we love may have said, “You really could get up out of that bed if you wanted to—mind over matter, you know” or “You’re just trying to get out of [fill in the blank].” Our relationships may have been tangled up with guilt on our part or theirs—or both. We may have been told we don’t really want to get well if we’re not willing to go bankrupt paying for every treatment that’s recommended. Some of us have gone bankrupt because we had to stop working; a third layer of financial hardship and a fourth layer of shame may have been added to our experiences.

Those of us who turned to an exploration of spirituality in search of meaning and healing may have found another place of confusion instead. For a long time, my own measure of spiritual growth was whether or not implementing the principles I was learning healed my physical condition. It was a quest with an expected prize. After the race, I could hold it up, providing proof to the world that I was an acceptable human being.

Some of us believed that traditional religious faith would result in a cure. We thought that if we worshiped and praised God, prayed, read scripture, and believed, believed, believed, our faithfulness would restore our health. Oh, how I contemplated that grain of mustard seed.

Numerous friends and strangers have said, “We have a faith healer coming to our church next Sunday. Why don’t you come and be healed?” How could they know I had already tried that numerous times?

We may have grown up believing the childlike notion that if we wished upon a star with all our might, our every desire would come true.

Concepts of creating your own reality and the law of attraction led many of us to think that health and wellness were just around the corner. Thinking positive thoughts, saying affirmations, choosing happiness, meditating, staying in the present moment, becoming conscious of who we really are (we’re not our illnesses), and setting our intentions for what we want are practices that are now readily accessible to average citizens. Many of us realized that such ideas are not in conflict with our preferred religions; in fact, they were inherent to our religions all along.

We may have been introduced to terms such as mysticism, bioenergetics, energy healing, psychoneuroimmunology, consciousness and beingness, quantum physics, archetypes, mindfulness, and mind-body-spirit holism. Even if we leaned toward more traditional, Western medical approaches, we’ve probably at least been exposed to these ideas. There is an expanded view on the planet of what’s possible in the realm of altering reality.

There are a number of people who experienced FM, CFS, MCS, and other chronic illnesses who have reported that they have been cured through specific medical protocols, alternative healing modalities, or faith healing. I believe those stories. I have never doubted that such things were possible in spite of the fact that I continue to be sick. It was the process of sorting out why wellness resulted for some people and not (yet) for me that is my story. The story is still unfolding, and I now spend my days focusing on being present with what is before me now rather than believing that a cure is the only acceptable outcome.

It would be a bonus for me if anything I share here is useful for someone else, but I’m primarily writing this manuscript for myself. I want to be heard. Even if no one else ever reads what I’ve written, I am finally hearing myself in a way that I’ve never experienced with any other opportunity. It is not only the illness that seems invisible to the world; I felt for a long time that my very presence on the planet was invisible. Being able to see words on a computer monitor that I have written about my experience is one of the most effective healing therapies I have utilized. It has caused me to dig deep into my beliefs and feelings. Writing as medicine is not overrated.

The other piece of motivation is that what I’ve experienced has been so profound and transformative, I want to express it. Whether or not it has any value or meaning to anyone else, it has value to me. It is a record of something precious.

Disability rights advocate Darrell Lynn Jones worked for the civil rights and empowerment of people with disabilities. But she didn’t recognize her professional skills could be used to live effectively with her own chronic illness until she connected the dots between her physical journey and her spiritual journey.

The author came to see her illness as a soul journey—meaning her human traits, including chronic illness, are simply Spirit immersed in a physical experience, using time and space as a playground for creation and discovery. Becoming MySelf offers a fresh look at the new-age idea of creating your own reality and suggests the reality one already has is brimming with gifts and opportunities. This perspective helps you end the discontentment you may have concerning illness, disability, aging, and dying—and the belief that we are victims if we’re sick.

“An empowering memoir/self-help book for anyone contending with a hidden disability or chronic illness.” (Kirkus Indie Review)

Darrell Lynn Jones, MA pursued a cure for her fibromyalgia, chronic fatigue syndrome, and multiple chemical sensitivities, but found a new life instead. Through her work as a disability-rights advocate and her personal spiritual journey, she learned just how “whole” she already was. Darrell lives in rural Virginia with her dogs and cats.