Stories from the Heart: The Ladybug Wish

Experiencing Creation from a Different Way of Perceiving

by Heather A. Oliver & Illustrated by Alison E. Canty 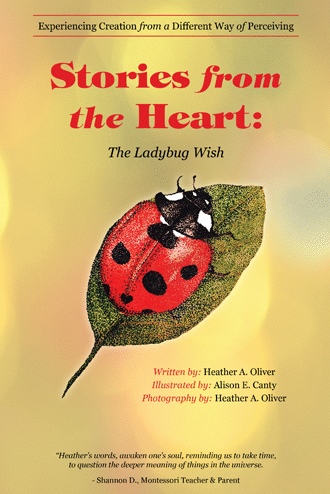 As my book is not a novel. It is 27 short stories. I have decided to include 2 stories from the book.

Years ago, my Mom and I would take my young children for a holiday at a cottage. One of our favourite activities was to go to a local beach. It was on Lake Huron, near Chantry Island.

Over the years, members of my family have seen numerous Herons flying to or from Chantry Island.

On this one vibrant sunny afternoon, I was on the beach basking in the heat after a cooling swim. Even my children, who were with Mom and me, were resting quietly.

I was on my towel gazing skyward. Usually I have something over my eyes. This time I did not. I remember looking up and seeing something I had never seen before. I wondered if I was actually dreaming this. So I asked my Mom to look up and to tell me if she saw anything. If so, what did she see? Well she looked up and kept looking up for a bit.

My Mom has been an avid birder for many years. If anyone should know what I was seeing, she would know for sure!

"Yes." she said, “you are seeing correctly. Great Blue Herons do not do that kind of activity. As you saw them first, the message is for you.”

What we both observed were three Great Blue Herons flying in a close circle very, very high in the sky!

Herons usually fly near the water or, yes, above in the sky, but not that high! To fly in a circle with 3 together is just not a usual Heron activity.

Even to this day, I am in awe of the memory of this experience. I am aware that the Heron is very special to my Mom. Several years later I have observed it is especially connected to one of my children. I am also now aware that the Great Blue Heron is a guide and teacher to me.

Still the spiral of the circle: It may be as simple as representing the circle of life. When I was reflecting about this memory recently, I saw the image of body, mind and spirit. Then in my heart-mind I asked, “What about ‘emotion’?” I heard or sensed... “It is all around us.”

If you were to view such a sight at the beach or on a walk someday, what do you sense is the message for you? Or is it simply a beautiful sight to behold?

In August of 2008, I decided to attend a Shamanic event in Newfoundland.

Our group had the pleasure of staying at a lovely B&B that was located at the far north corner of a small village community. The B&B dining area faced due west with a sandy beach directly in front of it.

It was later in the week, and our group was having an early morning breakfast with other people who had also stayed at the B&B. I was sitting facing the water which is also known as the Gulf of St. Lawrence. I so enjoyed gazing at the ocean. I live on the mainland and the closest body of water is several hours drive away.

Who knows...I might sight a whale or dolphin passing by.

What I saw that morning was a magnificent full arching rainbow! It spread from one end of the village cove to the other end. As I sat there observing this view, I wondered where the end of the rainbow was.

Instead what I saw was a reflection or refraction of the rainbow on the water. I followed its course to discover it came to the beach, continued on the sand, and went to the right of the B&B I was in! Hmm....I pondered this for a bit.

Then I wondered about the far side and looked to see what I might find. Sure enough, it reflected or refracted on the water and up onto the beach to disappear just beyond the south end of the village. (It went beyond my view.) Well, I pondered this too, and then I realized the whole village including the B&B was within the circle of this Rainbow!

I could not be silent. This needed to be seen by all in the room. Yes, all! Even the people I did not know. I got their attention and then showed them what I continued to see.

A lady to my right said, “I thought there was a Pot of Gold at the end of the rainbow!” I paused for a moment and then silently I placed my hands over my heart.

I nodded my head.

Had the rainbow not been so large, I would have loved to take a photo. Frankly, to be in the circle of this magnificent rainbow was more than a gift in itself!

What would it feel like for you if you found yourself within the circle of a rainbow?

• Have you ever been in the circle of a rainbow? • Have you ever driven under three rainbows? • Have you ever had a wolf smile at you? “You will be surprised, touched and invited into a way of experiencing your life that will feel like a breath of fresh air. If you need encouragement to open your heart to life, this book will surely move you in that direction. If you have pondered the true meaning of life, in these pages you will find answers from a fellow explorer who has discovered marvelous treasures on the path. Heather approaches life with a presence and openness that is rare. These stories from the heart are also a powerful reminder to notice the beauty and magic that surrounds us. Seen through Heather’s eyes, the ordinary events of our life can become extraordinary opportunities filled with possibility.” —Alison Normore, PhD “Her stories make you really, really think hard about everything around you. Her stories paint pictures in my head. You should look closer at everything you see—from the smallest bug to the biggest mountain.” —Ryan, age 9

Heather A. Oliver, RMT lives in Guelph, Ontario. She is the CEO and owner of Healing With Nature’s Touch – Holistic Healing Centre located on the beautiful natural grounds of the Ignatius Jesuit Centre, Guelph. Heather has 25 years experience in the Holistic Field. Heather has 3 adult daughters and a grandchild. www.heatheraoliver.com