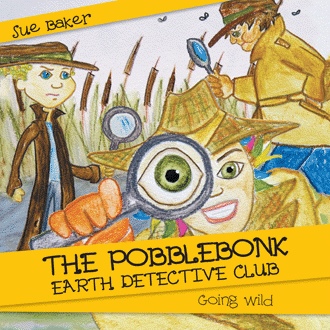 It all began with ten words, changing the lives of the Mathieson children forever.

‘I’ll take you hunting for Pobblebonks and Maniacal Cackle Frogs,’ their granny said.

‘Boppleponks?’ Pete asked. ‘I know you’ve been up in Queensland catching those revolting cane toad things but have you been smoking them too? Are you bonkers?’

‘No. Wait and see. The rain will soon clear,’ she said, gazing out the cobwebbed kitchen window to the rolling green hills. ‘Then it will be a perfect time to hunt for them.’

‘Come on Gran, you’re makin’ it up. What self-respectin’ creatures would have names like those?’ Ozzie said.

The kids had no idea what Pobblebonks were. In fact, looking back later they realised they knew nothing much at all. ‘Besides, can I have something to eat first?’ Ozzie asked. ‘It took a zillion hours to drive here. Hell’s bells, I ran out of food before we even cleared Sydney!’

‘I don’t know how you could even think of food with that stinking dog in the car,’ Fee complained. ‘How can any selfrespecting dog let out a pong like that and not even open an eye to see if anyone caught him out?’ Pete’s dog, The Phantom, was a black Staffordshire Terrier. Born as the runt of his litter, he had health problems. The worst was that after eating, his stomach blew up producing the most extreme-smelling gas. The Phantom got his name from the ‘carpet slippers’ he let off. You know, the kind of smell that suddenly whacks your nostrils without any warning.

Ozzie threw himself on the blue velvet lounge like a tired rhinoceros. A puff of dust burst from the impact.

The lounge groaned. Lounges always did under the assault of his huge buttocks. ‘That is so gross,’ Fee said looking at his newly grown armpit hair that peeked out from his sleeveless shirt.

‘You should wear something to cover it up.’

And if you don’t put on deodorant soon I’ll have to wear a gas mask,’ Pete added.

Ozzie thumped his chest and looked Pete’s skinny body up and down.

‘You’re just jealous. Anyway I’m not gross. My mates have all got this hairy stuff. And they’re also sweating like pigs all the time and have blackheads all over their noses. All twelve year old boys have these things it seems.’

Oh dear, Granny thought wearily. Is this what it’s going to be like?

That night the kids sprawled out on the musty-smelling patchwork quilt covering the huge old four-poster bed in Ozzie’s room.

‘I tell ya, Granny can forget that frog hunting stuff,’ Ozzie complained. ‘I’m on light duties this week. I’ve got a long choco-date and lots of lounge lizarding to catch up on. Besides which I have a massive bellyache,’ he moaned, clutching his big tummy. ‘And I just know this bellyache’s gonna be around for at least a week.’

‘I’m not going either,’ Fee said, screwing up her big green eyes.

‘I’ll have nothing to do with it, such a ridiculous idea. You can catch warts from those things. And what about those gruesome leeches out there?’

‘Aw go on,’ Ozzie replied. ‘Ya know a leech only needs one good feed of blood a year. Think of it as a donation to the Leech Blood Bank.’

‘We’ve got more important things to worry about. Like, my career is in tatters. How can I possibly further it in this hell hole?’

‘You’ve got such tickets on yourself,’ Fee said. But Ozzie was talented. The proudest moment in the school’s history, his principal had said, was Ozzie’s first performance at the Sydney Opera House.

‘What about my beautiful clothes? I’ve got nowhere to wear them,’ Fee sobbed. ‘I’ve got no friends here. And how could I tell my old friends that I’m now living on a farm known as The Pumpkin Patch? Or worse still that it’s near a village with the ridiculous name of Frogsville?’

‘I’m more worried about living with Granny,’ Pete said, creasing up his angelic face and running his hand through his curly, blond hair. ‘I don’t know what we’ll be in for. And what do we tell people when they ask what she does? Do you know she’s going to write a book about how to track animals from their poo?’

‘Anyway one thing’s for sure. It seems all we’ve got is each other for the time being. I think we should try to be nicer to each other.’ Ozzie and Fee pondered this. Maybe Pete was right. The kids snuggled up together for the night with Phant at their feet. He thought he was in heaven with so many smelly feet to lick.

With no familiar city sounds like traffic and sirens to comfort them, the kids fell into an uneasy sleep, dreaming of floods and frogs and pumpkins.

How life could change so quickly! It was bad enough when their father died from a heart attack. But then their mother couldn’t juggle her work and look after them too. Imagine how they felt when they were shipped out from the bustle of Sydney, Australia’s biggest city, to a farm in the middle of nowhere. ‘Woop Woop’ Australians call it.

But this turned out to be nothing compared to the series of bizarre events that lay in store. Who would have dreamt these kids would become famous? Sometimes for doing good things, other times in disgrace. So maybe that word should be infamous (or ‘bad famous’).

Aimed at 10-14 year olds it encourages children to investigate questions, carry out imaginative ‘earth detective’ activities, that can also be used by teachers, and develop a life-long interest in learning. Quizzes with country flag maps are designed to develop knowledge of the world and its place geography.

The book tells the story of the three somewhat ‘off-beat’ Mathieson children, who forced to move to their granny’s farm, fight off their loneliness and boredom by becoming amateur detectives, launching into a series of bizarre adventures in the process. Their cases take them deep into the world of animal tracks and scats, and native Australian animals including marsupials, frogs, crocodiles, rats and mice, a range of lesser-known animals and the unique character of Australia itself.

The book provides references to high quality useful websites for children to carry out further research. Literacy is stressed through a variety of methods with all technical terms highlighted and clearly explained.

Sue Baker has a bachelor of arts degree in environmental science and has taught high school geography for many years. She has also co-authored several geography textbooks as well as working as a curriculum consultant and in teacher training. Sue currently lives on the north coast of New South Wales, Australia where she runs a large conservation project. Sue also works part-time as a tour guide in parts of Europe.