Finding Hope in the Crisis

A Therapist’s Perspective on Love, Loss, and Courage

by Maura A. Matarese 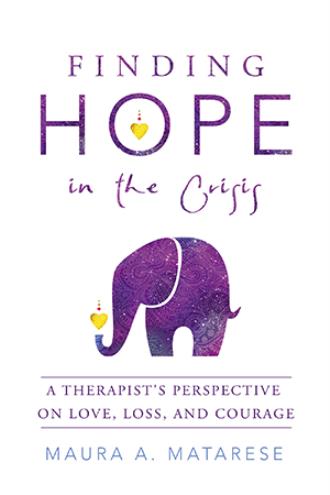 Narcissistic abuse has become a hot talking point these days. If you follow social media, particularly Facebook, you may find many articles about how to spot a narcissist, gaslighting (a manipulative technique where your partner tries to convince you that you are crazy and are imagining their abuse rather than take any responsibility for it), and signs that your partner is a psychopath. While these essays do have some meat to them and offer sound advice on self-care, such as trusting your instincts and maintaining no contact once you end the relationship, they don’t get to the heart of the matter, which is why people get ensnared in these relationships in the first place.

Karen had been in therapy with me for two years. Her husband, Jack, who was once the love of her life, had been showing her his darker side for many years. He often neglected her, raged at her when he was upset, and seldom showed any genuine interest in Karen’s wants and needs. When she would withdraw her attention from him and begin to contemplate leaving the relationship, he would then change his tune and start following through on the many promises he made to her. This, in turn, offered her some intermittent moments of hope and happiness, and she would re-engage with him. Yet once she did, little by little, he would switch back to his old behaviors. After a while, she would then start to withdraw again, and he would start to pursue her again. He offered her just enough of what she needed to get her hooked into riding the roller coaster of his moods and maltreatment. This was their relational contract.

The contract didn’t start out that way, though, and generally speaking, in this kind of relationship, it never does. Karen told me that she and Jack were once very much in love.

“We had a chemistry like no other, and he always felt like my soulmate” she would say, which I am sure was true.

This kind of chemistry, however, allowed for the classic bait and switch where, over time and unbeknownst to her, she came to implicitly agree to be in a connection with him that ultimately was all about him. Never did she imagine herself to be a sounding board for his dreams and disappointments and a psychic punching bag for his rage. Always trying to fix him or therapize him, she lived with chronic knots in her stomach. Obsessed with how to get things back to the way they used to be, she came to therapy after her friends and family expressed concerns on how her self-confidence and joie de vivre seemed lost. She agreed that it was.

So how did this implicit contract get signed?

Karen grew up in a disorganized household. Her father, who adored her, traveled for work, so he wasn’t around much of the time, and her mother, who was a trauma survivor herself, would often rage at Karen when she was a little girl. Karen shared with me her memory of her mother screaming at her for some unknown reason, as she didn’t remember doing anything wrong. Her mother’s affect was so intense that Karen remembered wanting to faint in an attempt to get her to stop and to win back her mother’s love. “I just wanted her to hold me,” she said as she wept silent tears.

As a four-year-old, Karen did not know how to stand up for herself; she couldn’t run away. Those are not skills that any small child has. Instead, she developed a belief that it was her job to take care of her mother’s emotional needs. By doing this job, which was necessary for her own sense of survival, she denied her burdens, ignoring her own feelings of fright, anger, loneliness, and abandonment that arose during and after her mother’s tirades. When she was older and did try to protect herself, her actions were then met with more rage and more neglect. In many ways, her relational wings were clipped.

So how did this type of trauma manifest in Karen’s intrapsychic system? First, she developed panic and fainting disorders, as her fight-or-flight response lived in constant overdrive for many years. Second, she found herself in a string of bad relationships, until she met her husband (or so she thought).

A couple of days before I had a session with Karen, I learned that a former client I treated for many years when working at a methadone clinic had overdosed and died. He too grew up in an extremely disorganized household. He was from Medford, Massachusetts, or as many homegrown Beantowners prefer to say, “Medfa.” A talented artist who dropped out of school because of drugs, he knew how to stand his ground, and he never back down from a fight, even when he probably should have. Unlike Karen, who didn’t know what to say when her husband mistreated her, my former client had just the perfect vernacular of hysterically funny and vulgar pushback lines for when someone mistreated him.

He was on my mind during a session with Karen, which ended up being a turning point in the therapy. She was trying to find a way to stand up for herself in anticipation of her husband’s next outburst. I began to tune out as she practiced and played with polite niceties such as “When you do that, I feel … [blah blah blah].” Then suddenly, I got hijacked by intense countertransference and interrupted her.

I said, just as my former client would have, “No, the next time he acts out, you tell him to go choke on a big fat d--k.”

Then a spontaneous eruption of laughter broke out between the two of us.

My former client would have been very proud. Karen took his lead and It worked. Stunned by her assertiveness, her husband apologized and told her that she was right, he did need to go back to therapy.

In the age of modern love, where people value and long to live authentically, many find themselves in a crisis of lost love. Whether they are going through a divorce, dealing with infidelity, trying to manage a manipulative partner or find themselves alone again and starting over, there is an anchor of hope inside of them and creative solution to their crisis. Utilizing the age old art of storytelling, this book shows the reader through clinical case studies, historical stories, mythology and even sporting events, how psychotherapy can help them find their inner hope and courage, so they can take a U-turn off the road of Love’s Labor’s Lost and travel down the road of Love’s Labor’s Won.

Maura A. Matarese, M.A., LMHC, is an author, speaker, and psychotherapist, dedicated to helping people find meaningful connection and authenticity in their relationships. A former actress and television producer, Maura combines her creative talents with her expertise in psychology, to help people heal themselves and live the lives they long to live. In her spare time, Maura enjoys music, theater, art, sports, yoga, figure skating and spending time by the ocean.