The Way of Scripture

by The Rev. Fr. Jonathan Bar-On 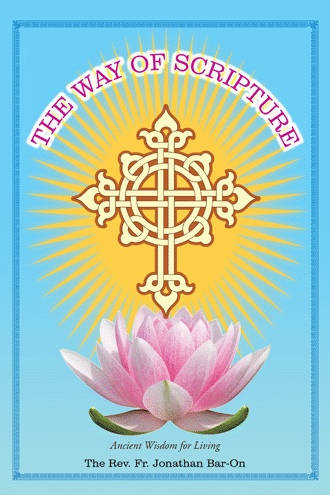 So she made a plan. She would ask the neighbors to let her know if Jesus was coming down the road. She would look out of the door frequently or even sit in front of the house waiting for Him. Now she had a clear intention, to do whatever it took to meet Jesus and be healed.

Then one day, she heard a shout. “Jesus is coming! The Teacher is coming!” She grabbed her veil and wrapped it around her. She shuffled out the door. This was it! The time had come.

But Jesus was already passing by, surrounded by a crowd of people. How could she get to Jesus? Her voice was too weak to call Him. But this was the time, her time, and she pressed into the crowd.

Her frail body was jostled by the people. How would she ever get close enough to ask Him to heal her? Would He even stop for her? Then she had a thought: If I can just touch the fringe of his garment, I will be healed.

She started saying it over and over (the Greek tense means she kept repeating it): “If I can just touch the hem (the fringe) of his garment, I will be healed.” The other gospels say specifically “the hem” or fringe of his garment. Fringes on a Jew’s clothing were a reminder of the Torah and the promises of God. Maybe that helped her connect more fully with the scriptures she had nurtured in her heart.

Notice the paradigm shift, from thinking He would heal her to “When I touch … I will be healed.”

She reached out and barely touched the fringe. It was like a kiss, the way a Jew lightly touches the Torah with his fingers. Something exploded in her body! She stood upright. The flesh was beginning to fill out on her arms. The wrinkles were leaving her face. She stood there radiant! Some in the crowd must have noticed, but most kept pushing forward, trying to get close to the Teacher.

Then Jesus stopped and turned. “Who touched me?” he asked. He knew exactly what had happened. Someone had tapped into the divine power flowing through Him. Someone had put His teaching about faith to work.

“Now go in peace (shalom means wholeness, health, everything good) and be healed. Be whole! You are free from your affliction.” The past is over. It doesn’t exist anymore. You are starting a new life. Live it to the fullest!

A frail woman with no education grasped one of the greatest truths in the universe: she connected with the Divine Source from whom all life, all being, all health, and all goodness flow. She reached out in faith and received what she needed.

Let’s see how she did it. First, she had a strong desire, a goal. Because of her condition, that goal became all-consuming. It filled her thoughts. Second, she only had a few scriptures and an ancient tradition to rely on—there were no books, DVDs, seminars, or webinars—but she held fast to what she had.

She had tried what didn’t work. It was time to go higher. She heard of someone who could connect her to the Divine Source. So she made a plan. It was a simple plan: she would just walk up to Jesus and ask. It was a good plan.

When the opportunity came, there was an obstacle in the way. A crowd of people stood between her and the Master. She waded in, not knowing if she would have the strength to reach him. But determination trumps strength or lack of it every time.

As she began to see the difficulty of actually stopping Him and asking Him, she adjusted her plan. In fact, she made a huge paradigm shift from asking Him to do something. Instead, she would do something. She would touch the fringe of His garment! That would be enough to connect with the divine power, and she would be healed.

And Jesus confirmed what she had done. “Daughter, your faith has made you well.” Your faith! Got that?

The power of faith lies in visualization. You must see with your inner eye that which you are believing for in order to call it into being in your life. Faith must be specific and directed at a clear, vividly imagined goal.

Once you have a clear vision of what you want, it is time to do something. “Faith without action is dead,” says the scripture. The expression of faith is intention. Your intention starts with your goal or purpose—that which you want to do or receive. You decide to do whatever it takes in order to bring it into your life. It is no accident that the object for which a prayer or mass is offered is called an intention. You are doing something specific to bring about a desired outcome.

The substance! That means it’s real, folks. It exists in real time. The woman above had filled her mind and heart with her vision of being well to the point where it had to manifest in her physical body. When something exists so strongly in your mind that it is literally, completely real to you, it will—it must—it cannot do anything but become real in your life as well! That’s pretty much the law of attraction in a nutshell.

Excerpt from Chapter 3: The Way of Receiving

With the passion of a scholar and the insight and compassion of a parish priest and counselor, Fr. Jonathan Bar-On makes the ancient stories and parables of the Bible come alive for modern readers. Fr. Jonathan, as he is commonly known, explores the different ways in Scripture to follow in creating your most fulfilling and abundant life.

Written as practical ways for anyone interested in achieving a life of meaning and purpose, The Way of Scripture begins with the fact that the universe is orderly and that all things, including our lives, are subject to divinely-ordained laws and ways which allow each of us to create our own happiness and abundance.

The Way of Scripture is not a book about religion. Its principles are timeless and universal. “God is Love.” Divine Love and abundance fill the universe and are available to “whosoever will.”

Each chapter ends with questions to help you apply what you learn.

Fr. Jonathan Bar-On brings years of college teaching and parish counseling to his writing. He is known for his Biblical scholarship and great storytelling. His interests include writing, martial arts, and the cultures of Southeast Asia. He currently lives and teaches in Ho Chi Minh City, Vietnam.