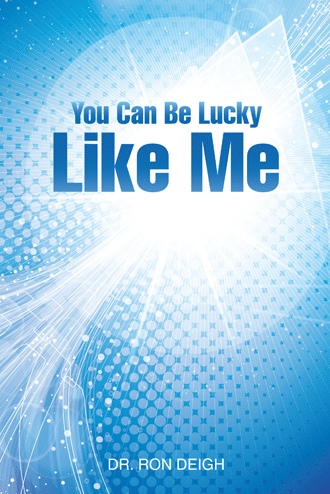 I believe that luck is an invisible positive energy that exists in each of us, and always works for our benefit. Anyone who is receptive to this state of positive energy will be aware of the strong association of luck with success. It’s because I am so lucky, that I decided to share some of my experiences.
Wayne Dyer says, “There are no mistakes, only experiences.” I have been scammed, but I have also profited from wise investments. As a student, I failed often, but then went on to earn several college degrees. More than once, I failed miserably in marriage, and then found a wonderfully compatible partner.
Why have I been successful? How do I know that this same success can also happen for others? Many of us have suffered misfortune, but we all possess the tools to consistently convert misfortune into prosperity. And since I know that I am no more talented than the average human being, I am certain that You Can Be Lucky, Like Me!
Those who have listened to motivational speakers, such as Wayne Dyer, or read inspirational books, such as The Secret, know about “The Law of Attraction.” This “law” states that we, ourselves, through our purposeful actions or thoughts, attract everything that happens in our lives. Many of us may have difficulty in accepting this concept. Surely those bad things that happened to me were not of my own making! Surely I did not create my own failure! It just wasn’t my fault! It’s easy to blame others. It’s easy to blame the politicians for the bad economy, or for pollution. It’s easy to blame an ex-spouse for a failed marriage. But if we are truly honest with ourselves, we can trace most of the bad things, as well as the good things, to our own actions or thoughts. We did, after all, elect those politicians. I did, after all, freely enter into those marriages that didn’t work.
Deepak Chopra says, “Success is a journey, and not a destination.” One does not simply wake up one morning and discover that he is successful. Instead, those who have success have expended a great deal of time and effort to accomplish that success. But the opposite is also true; those who are not successful have expended much less time and effort. The late Zig Ziglar said, “The difference between successful people and unsuccessful people, is that successful people are willing to do those things unsuccessful people will not do.”
Zig Ziglar and his contemporaries tell us that anyone can be successful if they just have the desire to be so. This may seem to be counter to what I said above about being willing to do those things unsuccessful people will not do. I think not! In fact, I believe the two thoughts are co-supportive, in that if one has the desire to succeed, he or she will choose to do those things necessary to assure that success. He or she will be the empty vessel, waiting to be filled with success. Success will come to anyone who chooses to be that empty vessel. That person will be lucky like me!
I have relatives who have been successful in careers such as teaching and nursing, but I have others who seem to lack the drive to succeed. In the latter cases, they just don’t seem to believe they can succeed, so they choose to ignore suggestions, and instead are content to stagnate in mundane jobs. They prefer to say, “What’s the use, I can’t do anything about it,” thereby creating a “self-fulfilling prophesy.” This negative attitude will always trigger negative energy.
There is power in the word ‘can’. We all have the capacity to achieve any goal, and to accomplish any objective, if we just believe we can do so. There is an infinite amount of positive energy in the word ‘can,’ just as there is a massive amount of negative energy in the word, ‘can’t.’
My good friend Dana LaMon was injured in a childhood fall and ultimately became totally blind. Dana could easily have used his blindness as an excuse. Instead, he went on to earn a Math Degree from Yale and a Law Degree from the University of Southern California. Today, he is a retired judge, a successful writer, and a professional speaker. The following is from one of Dana’s stories from an early mentor:

“When a task has begun, leave it not until it’s done

Be the job great or small, do it well or not at all.”

As my wife’s young son was searching for excuses to skip his homework, I recited Dana’s quote to him. I was surprised when he responded, “Ok, I just won’t do it at all!” After I stopped laughing, I explained to him that he had missed the point, which of course, was his objective. He was not aware that he was choosing failure by default. But how many of us make the same types of choices?
“Do it well or not at all!” Surely my wife’s son could not have been correct in his interpretation of those words. As orphans, my brothers and I were raised with different mentors and adult role models. So we developed quite dissimilar interests. For example, one of my brothers is a big fan of Nascar, but I am not. It might have been inadvisable for me to pursue a career related to Nascar. In such a situation, should one endeavor to “do it well, or rather just “not do it at all.”
The telling of my story has a twofold purpose. First of all, it is to record my autobiography. The second is to illustrate that I have been quite successful in life, even though I have often experienced extreme misfortune. And I firmly believe that anyone who truly wishes to do so can do as I have done. I am absolutely certain that You Can Be Lucky, Like Me!

The telling of my story has a twofold purpose. First, it is to record my autobiography. The second is to illustrate that I have been quite successful in life, even though I have frequently experienced extreme misfortune, and I firmly believe that anyone who truly wishes to do so can do exactly as I have done. Wayne Dyer refers to mistakes as “… experiences that shaped my life.” Perhaps your experiences are many, like me, but I assure you, they can definitely be exchanged for success. I firmly believe that You Can Be Lucky Like Me!

Dr. Ron Deigh, now a retired community college professor of biology, previously served as a lieutenant colonel in the United States Army Veterinary Corps. Dr. Deigh is married to the former Ylda Luna, a successful professional interpreter in her own right. He has two lovely daughters and two wonderful sons-in-law, both of whom are the proud parents of a son and daughter, Dr. Deigh’s beautiful grandchildren. Following his Bachelor of Science degree in biology from the University of California, he earned a Doctor of Veterinary Medicine degree from the Ohio State University, and thereafter a Masters degree in public health from the Uniformed Services University of the Health Sciences in Bethesda, Maryland. Additionally, he was a distinguished and outstanding District Governor of a prominent international service organization. All of this success came, despite deep-seated feelings of rejection and exceedingly low self-esteem, after he, along with his four siblings, were abandoned by his parents. He spent his formative years in an orphanage. Luckily, a loving family rescued him, took him home, and eventually adopted him, thereby helping to put him on the road to success. Dr. Deigh and Ylda now reside in the beautiful San Joaquin Valley of California.