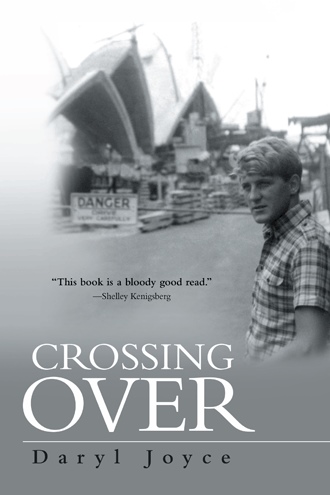 The third son of a farmer, born in the small town of Kooweerup in rural Victoria during the Second World War, author Daryl Joyce was a sensitive Australian boy who realized there was life beyond his parents’ farm. In Crossing Over, he narrates his story as he found his way in the world, navigating all of the challenges that came along.

Joyce tells about his formative years in post-World War II Australia with his brothers on the farm. Struggling with his own abiding sexual dilemma in this parochial environment, he finally spreads his wings in the city of Melbourne before embarking on a life-changing journey by ship to “swinging London.” He and his English soul mate from the ship enter into Britain’s late ‘60s youth revival.

In Crossing Over, Joyce shares how he ultimately had to choose between continuing his hedonistic lifestyle or starting a family with the girl he met on the ship crossing over. After nearly two decades, he returned to Sydney, a prodigal son of sorts, where he settled back into the Australian lifestyle, guiding his aging parents in their final days. Joyce tells a story not of merit or reward, but about departure, adventure, and homecoming.

Daryl Joyce, a native Australian, worked as a teacher and real estate agent. He and his wife, Philippa, have one son and two grandchildren. Joyce lives in Potts Point, Sydney, Australia. This is his debut book.