Envoys from the Stars 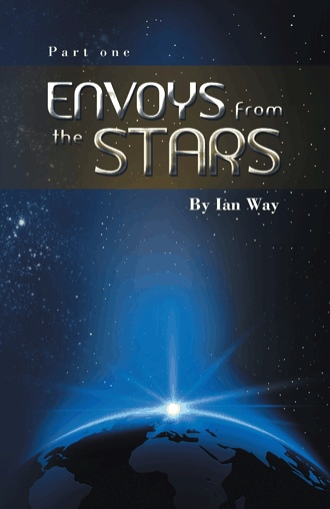 Three first-born children are sired by three males from Earth’s three great races! Each of these fathers had suffered abduction and bio-genetic surgery by extraterrestrials who appear to be a mix of ancient ancestors to our planet’s contemporary peoples. In the interest of Earth’s mankind, our progress over thousands of years, has been monitored, believe or not, on a regular basis by these ancient ancestors, but while consistently being horrified by the advent of our countless wars, our advancing technologies, in the alien’s minds, have now deemed us to now be approaching the point of starting wars which could result in our total annihilation! Each child, Charles, Chein, and Zuda, has been born with highly advanced alien genes which are programmed to advance in stages towards their maturation whereby they finally will be able to report collectively & accurately at any point whereby mankind’s manifest destiny could be ultimately affected! Hence the possibility of an alien intervention!

Ian Way was born in 1935 in Havant Hampshire UK and placed in boarding school by his mother at aged five, just three years after his father committed suicide. He remained at the establishment all through the war years till the age of ten when his mother remarried.

At the age of almost fifteen he secretly replied to an advertisement in the 'News Of The World' for young lads to do two years agriculture work in Australia. He explained that his dear mother was shocked to receive acknowledgment of his application from Australia House in London whence it followed that, granted with her permission, he would be welcomed to attend an interview.

In short, and to what he recalled was his mother's dismay, he was one of the first six lads successfully chosen to be shipped downunder via the sponsorship of the Salvation Army, which was one of several organisations commissioned to help fulfil the need of the Government of the time that was consistently heralding the cry that Australia should push to 'Populate or Perish!'

What inspired him to write this large two part novel was basically an article he read in the features section of the once Sydney based Daily Mirror that referred to his father's death in 1937. It detailed some of the history of the earlier development of beam weaponry to which his father, Charles Sidney Way, had been a party to. It also stated that his death had actually made headlines on the front page of the London Daily Sketch as the "Man who tried to prevent war!" The revelation decried his mother saying he died from a heart attack!