A Magic Book and the Faerie Queen 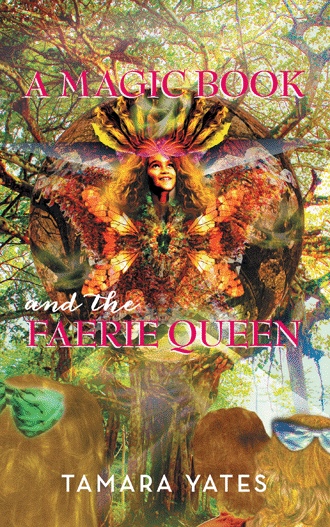 Most fairy tales begin with “Once upon a time…..” but this is no fairy tale. It is a tale of the Faeries.

“Mama, Mama, Mama!” cried Ella, “Tell us the story again!”
The three sisters, Lena, Ella, and Lani had listened to the story dozens of times, but could not get enough of it. Mama loved the magical story, too. It was the kind of story that her family had shared from generation to generation, as long as anyone remembered.
“Alright, but this is the last time,” she emphasized with a bright smile on her face and a twinkle in her eyes. Mama took a seat at the farm-style kitchen table where the girls were finishing their breakfast. She took a deep breath and began.
“When Mother Earth was young, her domain was filled with many magical creatures. There were unicorns, elves, dragons, mermaids, faeries-- too many to mention them all. The world then was a place of incredible beauty and everyone lived in harmony.”
Mama paused from the story and glanced intently at the sisters. “I know what you’re thinking,” she said, arching an eyebrow and wagging her finger, “This is crazy! There were never any magical creatures!” The girls burst into giggles when they saw her face. It was a cross between eating a lemon and drinking a cold drink too fast. “Well, you’re wrong.” She waited a moment for effect, “If you have the courage to hear the truth, then follow me along and find out why you don’t see magical creatures any longer. Find out what happened to them!”
The girls were mesmerized, focused fully on the story and they forgot all about their waffles. Mama continued.“Many centuries passed with everyone living in harmony. Some of the magical creatures even befriended people, among them the faeries. Faeries were very fun loving. Of all the magical creatures, they spent the most time with people, particularly children. Children were fun to play with and loved being out in nature like the faeries. The children loved playing with the faeries, too. They came up with the cleverest games and because the faeries would share with them stories about all the other magical creatures.”
Now, Mama’s face darkened and her voice lowered as she finished the story.
“Finally, it came to pass that an evil sorcerer thought he should possess everything magical for he was a cruel and selfish man. Of course, the magical creatures all refused to be his possessions, so he decided to cast a spell, putting them all into an eternal sleep. If they did not belong to him, then no one would enjoy their company!”
Gripping her seat with excitement, Lani, the youngest of the three, could barely sit still. Even though they had heard the story a thousand times, it never got boring.
“Now,” said Mama, “the Faerie Queen was very wise and powerful. She found out what the sorcerer was planning, and although she could not stop his evil spell, she used her magic to keep faeries alive through children’s dreams. Her hope was that children’s love of faeries would one day release them from the sorcerer’s evil spell.”
And with a heavy sigh, Mama exclaimed, “That, my darlings, is why you no longer see any magical creatures in our world. So remember this: whenever a faerie enters your dreams and tells you a story, know that this is a gift from the realm of magic!”
The girls were lost in their own thoughts about faeries in their dreams. Mama quickly clapped her hands together and announced, “Now, everyone outside! It’s a gorgeous day, enjoy it! Also, I need to finish the wash while it’s still warm out.” She grinned and swiftly shooed them out the front door.

What if faeries really did exist?

Lena, Ella, and Lani are just your ordinary girls enjoying their summer vacation when Ella discovers a book that will change their lives forever.

What would you do if the Faerie Queen asked for your help? Join the three girls on an adventure into the world of ancient magic, where they discover things they had only heard about in stories and, more importantly, the true meaning of a gift.

Tamara Yates has always loved fantasy stories and magic. A Magic Book and the Faerie Queen is her first novel and was inspired by her three granddaughters. She is originally from California, but now resides in New Braunfels, Texas, with her husband and three dogs.