Memories of a Disbarred Immigration Lawyer

The Statute of Liberty Points East 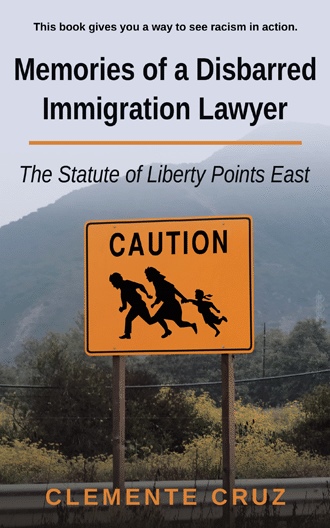 Due to the immigration sentiment prevailing in our country today, I thought it may be of some interest as to how it is or was to be an immigration lawyer in Ashtown, IA. I, Clemente Cruz, practiced immigration law from approximately 1991 to 2003-04. I was interested in representing the under and unrepresented. When Legal Aide did not hire me, me, like other unemployed attorneys, hung out our shingle to find food and shelter. As an American born with Mexican ancestors, born in Ashtown, IA in 1957, I encountered racism in many forms and situations, but also was the recipient of Affirmative Action. Totally assimilated and little to no Spanish skills, I took on the duty of protecting and defending those who are commonly known as illegal aliens. Well, I wanted to represent the unrepresented, so there I was. I often wondered, am I breaking the law by aiding and abetting these people? Of course, there is a law that prohibited me or anyone from doing that, but I guess in my case, no. Although my clients were and are often considered criminals, they are not. In this country criminal violators are afforded attorneys according to our Constitution. Illegal immigrants are not criminal offenders by legal definition, but instead are civilly liable for crossing a line in the dirt or passing the line in the Rio Grande River. That way our government can ignore our Constitution and not give them the rights persons within the U.S. boundaries are afforded. How convenient. Can you imagine the outcry by the public if we actually followed our Constitution, and if we gave them our legal benefits paid by taxpayers for normal criminals? Where are the strict constitutionalists now?

This book is based on the true life experiences of an immigration lawyer—a totally assimilated, third-generation Mexican-American—who felt it necessary to represent the unrepresented and underrepresented humans in the United States. He was full of idealistic ideas, ambition, and a willingness to try whatever he could to help his clients. It is also a story of compassion, sadness, and the effort to help the hopeless cases. Good intentions are often punished—and this book explores jaded politics, bribes, and consequences.

The author graduated from a Midwestern Law School in the early ’90s. He was disbarred in the mid 2000s. Now he is semi-retired.