Trail of Hearts – A Decade of Love Poems

A Collection of 10 poems written over 10 years 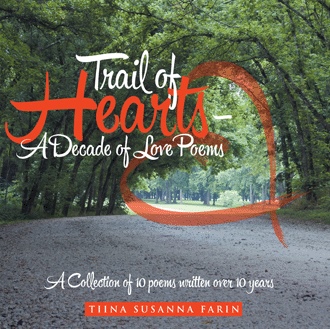 Allow me to explain how this book came to be. I have been writing poems since I was 11 years old but never had the intention of publishing any of them, as they were initially simply a form of release and the expression of my most private thoughts and feelings.

I have also loved the art of photography ever since I took a high school photography class. And lastly, there is a special way in which I believe love is speaking to me. In 2009, after spending a weekend in Paris, I was washing dishes and realized my hand was stinging. When I looked at my hand, I giggled out loud as I discovered the source of the sting.

There was a teensy tiny scrape on the top of my hand above the knuckle on my middle finger, no larger than the head of a pin, and it was undeniably in the shape of a heart. Not almost a heart, but a perfectly symmetrical heart. I giggled because it was as though the city of love had literally left its mark on me. Ever since then, I have been blessed to see “hearts” in places one would not expect to see them and began documenting such occurrences.

One day, out of pure curiosity I wanted to see if I had enough poems about love to match with the pictures of naturally occurring hearts I had started taking in my 20’s.

To my surprise and delight, as I started this process I found that not only did I have exactly 10 poems about love but that I also had the exact, perfect naturally occurring heart picture to pair with it that echoed the tone of the poem. The poems to follow were written between the years 1996 – 2007, the photos taken between the years 2009-2014, meaning the material in this book spans a period of 18 years. The poems range in emotion from short and sweet to longer, tinged with pain and confusion. From the high school crush that doesn't even know my name, to someone I dreamt about years before I met him, from my first heartbreak, to my heart’s deepest desire.

The poems are laid out in chronological order until the very last one. The last poem jumps back some years, and is one of my deepest wishes for myself, but also my wish for you all and is shared last so as to leave those words as my lasting impression on you. I share them with love from my heart to yours, to tell the tale of loves bitter and sweet stings in all its many forms, but even more so as a message of inspiration and encouragement to not give up on love no matter how many times your heart has been broken. As a single female now in my early 30’s, having literally experienced everything but true love, I still choose to believe in love. The knees weak, heart stopping, catch your breath, fairy tale kind of love – not to rescue or complete me, but because it is my birth right to experience such a happy, loving and healthy union of souls, and if I exist, so does my soul-mate, if you exist, so does yours! Know that you are not alone. So I ask, how might love be speaking to you?

Take a journey through time as Tiina shares poems written about matters of the heart. The collection spans a decade and is presented along with photographs of hearts found in the most unusual of places. There are emotionally significant events when it comes to love that every girl and woman experiences. This unique assembly captures some of the most prevalent of such happenings. Trail of Hearts: A Decade of Love Poems offers proof that you are not alone in navigating the confusing corridors of love and delivers a powerful message about the love that is out there for us all.

Tiina is a self-love coach and intuitive healer. She is dedicated to the healing and empowerment of womankind and is passionate about helping women discover or reclaim their true selves to ultimately live their best lives. This is her first book. She resides in Toronto, Canada, with her furry beloved, Willow.