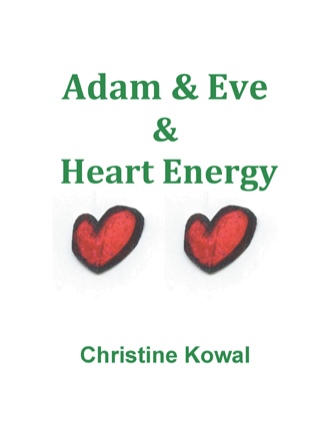 And then one day Young Adam found himself sitting under an apple tree with his friend, Young Eve, she felt different and she smelt different to him and he felt that yearning start up inside of him. He had spoken to God about it earlier that day and God had been explaining things to him as he felt the changes in his body and he new that all was well.

Young Adam had been Young Eve’s friend forever but somehow, now he felt and looked different to her. He was so beautiful and she new that she wanted to taste Adam, she wanted to kiss him. She had been talking to God about it for quite some time now and God had told her that when the time was right, a snake would appear to them in the Apple tree and that would be their sign. And now there was a snake up in the apple tree under which they sat.

Adam & Eve & Heart Energy is an art book, a story about discovering your own personal power, while experiencing the beauty of falling in love and loving another with one’s body, mind, and spirit.

My intention in life has always been to do what I love every day and to believe in myself. “We are all powerful beings; absolutely everything you need is inside of you.” Each day, I practice making every decision from my heart energy, that piece of God love universe Creator inside of me.

Christine Kowal is the founder of The Heart Energy Program. She speaks to audiences large and small and does one-on-one personal heart-energy coaching, teaching people about the Law of Love, how to create the life they desire from within. Christine resides just outside of Toronto on her farm with her animal family.