The Moon To Play With

A Daughter's Journey through Love, Loss, and the Power of Presence 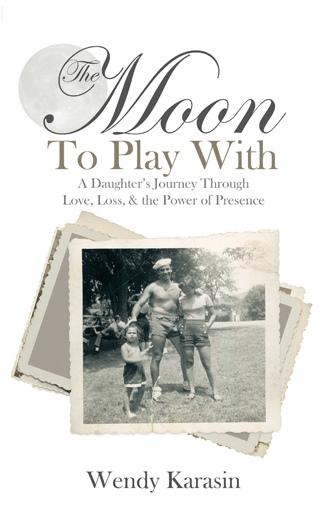 “The Times They Are a-Changin’ ” — Bob Dylan

“Your blood test shows an elevated liver enzyme,” says Dr. Anslow, our compassionate physician, who hugs us on our way out after ordering more tests. The first is the CT scan at Zwanger-Pesiri Radiology, a steel and smoked-glass building recessed in the ninety-degree angle formed by Merrick Avenue and Sunrise Highway. Inside, there is a large waiting room and a central staircase leading to the second floor. Chet, my mom’s husband, my mother, and I have pressure-cooked guts.

“Mrs. Miller?” Our heads turn in unison to view the young tech in lavender scrubs who identifies and whisks my mother behind closing elevator doors. When she is returned to us, we are given the circumvented conclusion that the CT scan proves inconclusive. “Your doctor will call with the results,” says our artful, if not evasive, technician. My brain’s internal chatter is maddening. It is with the power of some invisible energy that I am able to drive home.

“So what now?” we ask Dr. Anslow at our next visit.

“It’s probably nothing but we need to investigate further. I recommend an endoscopy.” Agitation suffuses Chet, my mother, and me.

On a sunny, fateful afternoon I get a call from the gastroenterologist who performed the endoscopy. I lie on my hip draped like Cleopatra on my mother’s peach-colored leather sofa, a pillow propped under one arm and a blue woolen blanket covering my legs. A melody pulls me from my reverie. It takes a few moments to recognize the ringing phone as mine and several more rummaging through my bag to locate it. The number is unfamiliar and I assume the individual on the other end has misdialed.

“This is Wendy Karasin,” I answer but I’m thinking: What an idiot, didn’t he call me?

“Are you Blossom Miller’s daughter?”

“I am Doctor....” I do not catch his name. It has a lot of consonants. His curt tone, the fact that he’s a doctor, and my instincts lead me away from my mother overhearing the conversation or noticing changes in my facial expression. Throwing the blue blanket from my legs, my apprehension and I walk out the front door into the sharp fall air.

“I reviewed the results of the biopsy. Your mother has pancreatic cancer.” Why is he calling me? I do not remember giving him my number, nor do I want to be in possession of information important people (my mother, her husband, and her primary care physician) are not. I sit on a driveway of gray-speckled brick with my equilibrium and legs knocked out from under. Doctor whatever his name does not seem to care whether I can stand, nor does he offer options to slow my disintegrating composure from being siphoned through the phone line. Leaves in carrot and ginger hue fall from bough to earth.

“Unfortunately, the tumor has wrapped itself around the portal vein. I don’t know if surgery is possible but I’ll give you the name of a surgeon on Long Island, in case.”

Am I to deliver this grenade? Not likely; emotion has taken my vocal cords hostage, rendering speech impossible.

The good news? We caught the cancer early. The bad news? The diagnosis is a death sentence.

“To realize one’s destiny is a person’s only obligation.” — Paulo Coelho

I was a fat baby who looked Asian. At eight pounds, one ounce, I weighed more than most babies in the nursery, including the boys. The nurse handed my substantial self to my mom, who smiled and said, “Are you sure she’s mine? She’s cute but she looks Chinese.”

My mother was five feet, two inches tall and weighed one-hundred and ten pounds. It would be easy to mistake her petite form for a weak one. But she had the gravitational pull of a medium sized planet in the Milky Way galaxy and a bear-hug strangle that could incapacitate. Her small frame encircled her targets like a boa constrictor forcing them into submission. Only when they fell to the ground would she release her clutch. As a young child I would have chosen her, over anyone, to walk through a dark alley with.

Her straight brown hair and piercing dark eyes were visual precursors to a charismatic, vivacious personality. Her tangos and meringues made their way across many a dance floor with fluidity and grace, but folk and rhythm and blues were the musical beats that made her heart pump. She listened to Lead Belly, Paul Robeson, Woody Guthrie, and Pete Seeger. She was smart and political and taught me to stand up for my truth, even and especially when that truth was unpopular.

Born on Tremont Avenue in the Bronx to immigrant parents in 1923, her childhood was truncated at the age of ten when her father committed suicide. He hung himself with a rope in their Bronx living room. My Grandma Sarah watched her young daughter with insatiable interest because my mother, who didn’t drink or smoke, nevertheless had a rebellious streak the size of Texas. Her only sibling, her sister Ruth, was six years her senior. If they were born on separate continents to dissimilar cultures, they could not have ended up more differently.

After high school graduation, eighteen-year-old Mom and her best friend, Milly Brody, marched into the Army recruitment center in downtown Brooklyn and exited as some of the first women, other than nurses, to serve in the ranks of the Army. Two feisty passionate WACs who refused to accept self-limiting stereotypes. My generation, with greater ease, lifted the not dissimilar cause of feminism like a toddler and set her down on firmer ground.

Mom’s introduction to Army life was getting pummeled by a large and angry Southern woman who hated Jews. Katherine, a devout Catholic inhabiting the barrack bed beside my mother’s, saved her life. A fierce sense of justice formulated. The year was 1942. The base’s recreation center was decorated with streamers, a live band, and plenty of alcohol. As recalcitrant as Mom could be in certain regards, that is how determined she could be in others. For reasons unfamiliar to me, other than disliking the taste and effect, she drank one sip of alcohol and took one drag of tobacco and decided ardently and eternally to forego both.

This inspirational memoir travels one woman’s road to generational adulthood as she resists, then embraces, her parents’ aging and eventual deaths. Wendy Karasin’s descriptive passages offer readers the opportunity to experience the normalcy and enormity of what happens in her life. As Wendy is pushed into a caregiving role that grows exponentially, she must surrender to an inability to alter her parents’ fate. Her pain morphs from engagement to acceptance, and ultimately compassion. The experiences that unravel her also transform her. With seventy-nine million baby boomers and forty million seniors, the imperative requirement for conscious end-of-life conversation has arrived.

“The Moon To Play With is more than the memoir of the author’s loss of both parents. Beautifully written, Wendy Karasin shares the sensitive transition to true adulthood—as defined by the moment when one is no longer anyone’s child. Wendy gracefully takes us on her journey with the understanding that this path is one we all walk at some point. She writes with emotional transparency, and without the triteness that can accompany a subject so sensitive. Wendy Karasin’s story is that of a universal experience, told with grace and soul."

Wendy Karasin is a divorced baby boomer in the process of losing both her parents and in danger of losing parts of herself as well. Sandwiched between her four young-adult children and the growing needs of her aging parents, she must surrender to a power greater than her own. As this daughter’s reality shifts from denial to presence, a personal, pensive, and thought-provoking journey ensues. The Moon To Play With illuminates the beauty and complexity of parental love, acceptance, loss, and renewal.

Wendy Karasin holds a graduate degree from New York University. In addition to having raised four children, she has worked in educational publishing, owned and operated a diet center, and provided professional services as a wellness coach. She presently lives on Long Island, New York.