The Children Who Came from the Stars 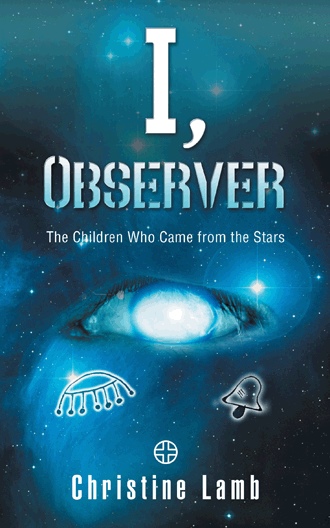 My name is Ishy. I am a crystal robot from the Pleiades and I am very old now. The High Angels created me to be a very special kind of robot, part angel/part robot. I have the face of an angel with one all-seeing eye, embedded in a clear crystal body. I was designed to work efficiently within the controlled environment of the mothership, during her voyage to the planet Mu, a long time ago.
Now I have returned with the Elvens, who always return during times of change. It was predicted that many star people from different planets would come to experience life on Mu. We are here to observe the billions of inhabitants on this planet.
Have they stopped hating and fighting one another? Have they moved away from weapons and war, to create a planet of love? Do the people live together in peace? These are the questions my companions in the Pleiades will ask.

We have returned to the site where it all began, so long ago. The mother tree grows in the same place where the great grandmother tree grew. She stores the knowledge of that time in her twisted trunk, passed on from seed to seed. Here is where ancient hieroglyphs can be found. It’s a secret, known to only a few humans, that hidden in the bush are two great slabs of rock that have formed a narrow passageway. The walls are covered with very old symbols which tell the story of the ancestors who came from the stars.
We gather in a circle around a large flat rock, where the ceremonies took place and many stories were told. This is where the moon and the stars in the sky can be seen clearly. We can see the bright constellation of the Pleiades, known as the Seven Sisters. The Elvens grant me permission to tell the story of the Star family who survived the attack on the mothership, and of the two children who saved us.

Once upon a time, this dry bush was teeming with life and colour. This was the time when the Reptilians ruled this planet, and they roamed the rainforests, and the inner earth that produced the valuable gold. The Reptilians built their cities and enslaved the indigenous tribes of hairy men, and they forced them to go deep into the mines. A few hairy people escaped and hid in caves in the rainforest, to avoid capture.
Mu was hotter, wetter and more toxic than it is today. Many plants and animals were older than the dinosaurs, like the cycads and the great serpents that lived in the rainforests. This planet was a very different and dangerous place to visit then.
I recall a time when we were abandoned at this very site. We were not suited to be in such a hostile place as Mu. At first I lost my ability to communicate with Star Base, and although I had my all-seeing eye I was isolated within a cave. I wanted to assist the star family, who were my responsibility, but I could not help them. It was the star children who saved us from certain death, on a planet that was killing us.
*
I remember the mothership, Rexegena, before the attack, hovering in the upper atmosphere of the Northlands. We observed from the control centre the beautiful blue and green orb we called Mu. She looked so cool and inviting, but this was an illusion. Those on board were well prepared for Mu’s harsh environment of toxic gases and strong magnetic energies. But we were not prepared for the ambush that was awaiting us.
The Rexegena was so large that 50,000 people lived and worked in her. Many came from the star system known as the Pleiades. Others came, through the stargate of Sirius, from distant galaxies. They were collectively known as the Star People. They came with the blessing of the Federation of the Galaxy, called Star Base. Those who volunteered for this mission knew that once they set off for Mu there was no guarantee that they would ever return home.
The Star People planned to live and work within their perfect mothership, where the air was clean and thermostatically controlled, and their food was grown and prepared on board. They were to live in the Rexegena until a new race was born of the many colours of the spectrum, to be known as hue-man. Their offspring would evolve to withstand the dense energies on Mu, and would live and multiply here. This was the edict given by the High Angels.

The curved windows of the command centre gave us a superb view of the galaxy. Our working areas were white and streamlined. The computer screens were operated by thought, and voice command. At the back of the controls there was a large, semi-circular desk where the commander sat. Everything was efficient and smooth running. Everybody knew what to do.
The command centre had twenty crew members. There were the highly intelligent Pleiadians, with wiry bodies and pale skin, who had overall control of the command centre. The Bird Tribe were the navigators; they had acute eyesight and superb navigational skills. They had stooped backs and long curved beaks, and they spoke their singsong language amongst themselves. When all the Star People came together they communicated telepathically.

There were eight of us crystal robots in the command centre. Each robot was a single crystal column with a face of an angel within. Our arms and tiny hands, with disks of four crystalline fingers, connected with the energy source of the Rexegena. I was number five, the heart number, and that is why the star children loved me. They could see my beautiful big heart, pulsing within the crystal.
I think we were most attractive. Our most unusual feature was one large blue eye that could rotate 360 degrees, so that we were all seeing. We were able to know and feel things psychically, and we glowed with the energy of the crystal that created a soft golden light around us.
Our main role in the command centre was to communicate with the beings known as the High Angels. They had created us, and programmed us with a sixth sense. We were created as part robot/part angel to bring harmony and balance to the community, from a very high frequency. The eight of us were designed to work as a team on the Rexegena. We could also work independently for a short time but we would lose much of our power when working alone; as I was destined to discover.

The two star children, Kuri and Nym, were sister and brother and they looked very much alike. They were Pleiadians with Elven ancestry on their father’s side. They came with their parents, their older sister Salima, and an Elven called Nada. Dressed in blue overalls like the other children on board, they were light-boned and agile, with skin that was a delicate blue white. When they walked upon the land they left no imprint.
On that fateful day the children stood with their parents, Alcher and Mother Seer, at the command centre. There was much excitement as the Star People prepared for the first launch of craft loaded with equipment and supplies. The scientists were to establish an exploration centre on Mu. Alcher, the commander of the mothership, was busy instructing the crew as Mother

“There will always be a special group of humans living on Mu, who will be called the ‘story tellers’. They will be known as the first people. It is their sacred duty to keep their story pure and to pass the truth on to each generation. One day they will know it is time for the return of the Star People. It will be in the stars. It will be in the songs they sing and in their dances, the sand paintings and rock carvings. All these will tell of this time. And there will be many days when their message is not heard. They will be sad, because no one listens to them. One day, all will listen.” —Mother Seer, a great Pleiadian wise woman

Long ago, a mighty mother ship called the Rexegena set off from the Pleiades for a small planet called Mu. But before the Rexegena landed, the ruling reptilian people destroyed the ship. The survivors struggled to complete their mission to create a race of people born of the many colours of the spectrum - the first hue-men.

Their children, peaceful and wise, were born with a pure spark of love in their hearts. In these exciting first days of life on a new world, two children help the stranded Star People learn to survive and build new lives. In their brave voices, the ancient stories live on forever.

I, Observer: The Children Who Came from the Stars, the first novel by Australian author Christine Lamb is a gift to her five grandchildren. Her goal as a storyteller is to introduce readers to the creation beliefs held by the first people. Christine lives in the Tweed Valley, NSW, Australia.