From Chaos to Castles 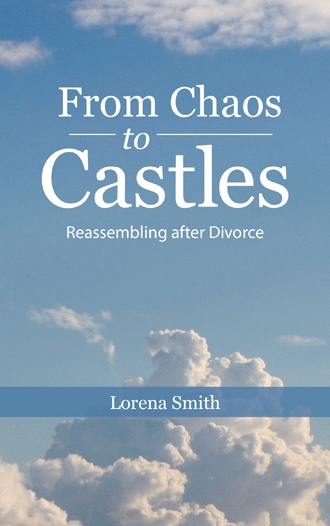 MISSING IN ACTION
At the age of 37, I ran away from home. Not the kind of running away young children do when they pack a snack, walk to the other side of the block, and sit in the line of vision of their parents. No. This was the real deal. Some called it a mid-life crisis, others irresponsible, but for me it felt like a matter of life and death.
Looking back now, knowing that I missed my daughter’s birthday and hearing the pain that my leaving caused, I can’t believe I did it. What kind of a mother leaves her five young children for six weeks, with no communication whatsoever, when they’ve been used to having her home and available every day, every moment? A desperate one. A woman teetering dangerously on the edge of emotional break-down.
I needed the voices screaming in my head to stop. They were those of my mom, my husband, my kids, and all those well-meaning people who had always claimed to know more about me and for me then I could possibly have known for myself. I needed, if even for a time, to not feel needed. I was seeking space to find my own voice, the one I barely remembered and had somehow lost. It had become buried deep under obligation, fear, and the ability to contort myself in any way possible so that others would approve and love me. And yet I still vaguely believed in its existence. In the process of reclaiming my own voice, some higher part of me knew I would then be open to hearing the divine whisper of God, something I had always craved.
In arriving at my new temporary destination, it occurred to me that the one person I was trying to escape the most was the only one who had made the trip with me. How exactly does one run away from oneself? Well actually, I had been doing it for years, by repressing thoughts and emotions, ignoring my own intuition, and letting what others thought of me determine my opinion of myself. It was time to get real. This is where the rubber meets the road, as they say. It was time to deal with the only common denominator in every situation of my life, me.
As I sit here, I’m pondering how to capture in a few pages six intense weeks of falling apart and coming back together. How do I describe the pain, the exhaustion, of time and time again releasing an ocean of tears?
It was important for me to not have any contact with my family. I knew if I did, I would wrestle with immense guilt. Having that emotion constantly creeping in would get in the way of the clearing I needed to do. I journaled hundreds of pages of emotions that I had felt over the years and was either too embarrassed, ashamed, or afraid to admit. I made lists of who I was, what I liked, and what I desired from life. Those exercises were surprisingly difficult as I had completely lost touch with any knowledge of myself. As the time went on though, my lists grew more comprehensive. After ten years of either being pregnant or nursing, combined with not caring well for myself, my body demanded reprieve. I started to listen to what it needed. I slept when I was tired. I ate when I was hungry. I walked when I craved movement. I read spiritual books and opened myself to the Divine.
For some reason I couldn’t explain, I had taken a small keyboard with me. As a child I enjoyed playing and had completed eight years of lessons, but over the last 20 or so years, the music within me had virtually died. I had recently started singing again at church, but my blocks in this area obviously ran deep.
One day, I was on a walk around the shoreline, when a melody popped into my head. It was only seconds later when lyrics started to come. Nothing like this had ever happened before, and when I returned to the house, I went directly to the keyboard to try and translate what I was hearing. What resulted was a simple song. It did not feel like I was writing it, but rather I felt like the song in its entirety had been given to me, and my only job was to get it out. I became almost obsessed with the process, unable to focus on anything else until it was out of me and onto paper. I knew the song was complete when I suddenly felt empty. My mind had gone silent. It was a strange experience, the first of many to come over the next several years. Looking back, I see the lyrics as a message to me, a sneak peek of a way of living life that I had been unfamiliar with up to that point.
As the time approached to return to my previously scheduled life, I knew I had experienced a shift of some kind, and yet feared losing it. I was hoping to maintain the new rituals I had begun, but in some way, I think I also expected life to return to “normal”. At the time I did not fully understand the universal law of correspondence, that with internal shifts come external changes. I had discovered some big, scary truths while away, and as I’ve since learned, once you know something at a deep level, it is impossible to un-know it. I can try to ignore it for as long as my stamina to experience pain endures, but the knowing remains.
When I returned home, I was blindly unaware that my journey, both personally and musically, had only just begun.

From Chaos to Castles will take you on one woman’s journey from being a stay-at-home mom with five young children, through a traumatic intensive care experience, and into her new life as a single mom. It’s a tale of divorce, change, falling apart, forgiveness, faith, and finding one’s own voice. Lorena’s intimate collection of thoughts will bring both laughter and tears and leave you examining your own life.

“A shining example of vulnerability and grace, From Chaos to Castles is the account of one journey that could have been kept secret … and a story that had to be told.”

“This is an exceptional invitation to embrace life at a different level. Each of our lives is full of emotions and experiences which can turn our world upside down and sideways. The stunning insight of this author is revealed in how she presents options for a new way of thinking and how she demonstrates them with purpose and precision. From Chaos to Castles is a guidebook for change.”

“From Chaos to Castles empowers you to take action. Lorena is a wonderful role model for all of us who wish to change and transform our lives.”

LORENA SMITH is an author, inspirational speaker, and musician. She holds a BA in psychology, has studied spiritual metaphysics extensively, and is passionate about personal transformation. She currently serves as a music minister and lives with her five children in Oregon. For more info visit LorenaSmith.com