Healing Begins in the Heart

by Karen A. Mace 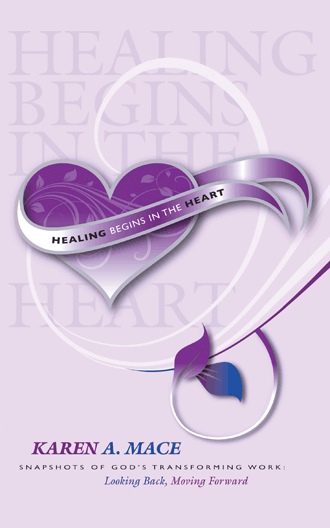 If…if…if…all the if’s in the world won’t change things. However, if I had known Sarah planned to take a bath with Illy rather than supervising her in the bath I wouldn’t have allowed so much time to pass before checking on them. But…it is what it is and I didn’t know. As I worked in the kitchen I didn’t notice the smell of gas. We had an Ecuadorian stove and there was a slight gas leak from it so we had it under a window and always kept the window open – I didn’t notice the smell anymore. This evening while I stood there after putting something in the oven I felt a sudden, very sharp pain right where my heart is; what I imagine it would feel like if someone stuck a knife in your chest and turned it. I gasped and had to bend forward a little forcing myself to take deep breaths. It faded but left me perplexed - surely the gas leak wasn’t that bad?

Immediately after, I realised time was going and the girls would have to hurry or everyone would be arriving and nothing would be ready – Sarah was going to set the table for me. Sarah was quite excited about the evening, as she was the one who had encouraged us to host a group.

I walked out of the kitchen and as I did my heart began to pound, I knew fear and I could feel it literally breathing down my neck. Trying to shake it off I called out to Sarah, but everything was so quiet, too quiet; I felt as though I was in a fog as I walked to the bathroom. The door was closed, and there was no sound, nothing. I threw open the door and it banged back against the vanity unit. Sarah’s radio was on the unit, the bath was full and there on the floor, my two girls. Illy was curled head towards me beside the bath; Sarah was between the vanity and the toilet – as though they had both become so tired they just lay down and went to sleep. The window was closed and at the same time I opened it I screamed. I didn’t know what to do first but knew I needed help.

Our best friends, Steve and Eleanor Grace lived across the hall from us and as I tore across there to bang so hard on the door I broke the doorjamb, I screamed ‘my babies are dead, my babies are dead’ which brought Manuel, our concierge, racing up the stairs to see what was wrong. I was ahead of him though, and raced back inside to start CPR, while screaming at him to get our friends, the Higgins from the third floor– what a horrible thing for a mother to have to do, decide which of her children to do CPR on first. I agonised over this later, guilt and condemnation sat on my shoulders for many years – I didn’t want Sarah to think I loved her any less because I was working on Illy; but what sort of a mother was I for this to have happened in the first place?

People came, things happened, someone went to get Ross and next thing we were at Hospital Vozandes while a team worked on Illy and Sarah. Where is God when it hurts? I was wondering where he was through all of this and remembered He had said He would be with us. I trusted Him to keep His word but it seemed to me that He had let me down just like everyone else I trusted.

Ross was in with the team and was distressed when one of the doctors working on the girls brought up stomach contents, so he took over himself. Occasionally from the waiting room we heard the sounds of life, a machine beginning to beep, but the sounds stopped almost as quickly as they started and eventually those dreaded words, ‘There’s nothing more we can do, I’m sorry.’ Where are you God in this?

They looked to be asleep and I didn’t want to leave them. If God answers prayer, if He really loves us, then why were my girls lying still, lifeless on cold hospital tables?

The following day, a Memorial Service took place. As I think back it was remarkable that in such a short time with so little notice hundreds of people came from all over Ecuador. It truly was a time of coming together to comfort each other. I couldn’t appreciate it then, all that went into making it happen and even the efficiency with which our return to Tasmania was organised and the details around sending Illy and Sarah back. All I could think of was ‘why didn’t God prompt me to go to the girls earlier?’ Why didn’t He intervene? He could have. This didn’t have to happen.’

Do you feel that God has abandoned you? Do you struggle with fear and grief? Are you weighed down with doubt, anger, or depression? Do you wonder if you can really trust God?

You are not alone.

For eight years, author Karen A. Mace and her husband, Ross, served as missionaries in South America. Blessed with the joy of doing God’s work they brought their two daughters Miriam and Sarah with them and rejoiced in the birth of their third daughter Ileana soon after arriving in Ecuador. God tested Karen and Ross more than most of His soldiers. After the deaths of Ileana and Sarah in Ecuador, just three and twelve at the time, Karen was thrown into a crisis of faith that lasted for years.

She understands how even the most faithful can stumble and question and reject the love of the Lord.

Healing Begins in the Heart, Karen shares how God found her in her doubt. God exposed the lies that Karen had once believed. He showed her how deception created the false lens through which she saw God. As she grew in knowledge of God’s loving care, she came to see the life transforming truth of who God really is and the freedom that is hers through all that Jesus has done. An open and honest sharing of Karen’s trials, tragedies, and ultimate victories, this is a story about God’s grace, His perseverance with us, and His desire for an intimate relationship with us that leads us into the good plans and purposes He has for each one of us.

Karen A. Mace, the director of Healing Place, is a registered counsellor and writing therapist. She has academic degrees in nursing, education, and counselling, and is currently pursuing her graduate studies in psychology. Karen and her husband, Ross, served as missionaries in Ecuador, South America. They live in Grindelwald, Tasmania, Australia.