Stepping Into the Light

The Miraculous Ways That Our Loved Ones, Angels & Guides Are Able To Let Us Know They Are Near 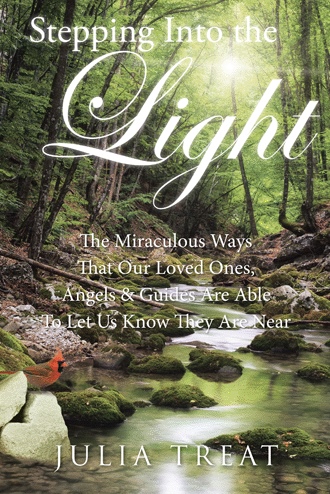 I sat for a reading with a young lady named Sarah, who was in her early thirties. Sarah was seeking guidance about some important decisions she was facing in her life and hoped that her grandmother would come through to support her. Sarah received a plethora of useful information from her angels and guides—information that she said would be quite helpful, as she had some important decisions coming up. Sarah’s grandmother came through as one of her guides and assured her that everything was going to be okay. Sarah said that although she knew her grandmother was watching over her, she didn’t feel that she received many signs from her. “I know she’s there, but I just don’t get any signs from her,” she said. “I ask her to give me signs all the time, but nothing happens.” Just as Sarah was finishing her sentence, I began to see a lone flower standing in the dirt. It stood straight up, had white petals, and was standing there all by itself, surrounded by nothing but dirt. I told Sarah what I was seeing and asked her if it made any sense to her. She shook her head no and said that it didn’t make any sense to her at all. I drew a picture of the flower and told Sarah that it seemed important and that it was somehow a sign from her grandmother. “I have no idea what it means,” I said, “but I know it’s important. Your grandma says that it will make sense soon,” I added. Again, it was one of those times where I found myself telling Sarah’s grandma, You’d better make that happen! quietly in my head. Sarah’s reading came to a close, and I handed her the sheets of paper I had been doodling on. We glanced at the flower that I had drawn, raised our eyebrows, and shrugged our shoulders as if to say, “Who knows?”

I saw Sarah a few months later while visiting one of my favorite local restaurants. I had no idea at the time that she was actually one of the waitresses there. I had never seen her waiting tables there and was quite surprised when she came walking up to my table. “I got my flower,” she said with a smile. “You did? I can’t wait to hear all about it,” I told her. Sarah proceeded to tell me that she and her husband had decided to landscape their entire front yard. They had turned up the entire yard and removed all of the old grass, and all that remained was a flattened yard full of dirt. They were doing some landscaping and planned to plant new grass very soon. Sarah and her husband had left their house to run to a local home-building supply store. It was midafternoon, and the sun was shining bright. “We were going to pick up the grass seed and a few other items we needed for the yard,” she said. “We were only there for about an hour.” Sarah continued with her story and said that when they returned home, they were shocked at what was waiting for them. As she and her husband pulled into their driveway, they noticed a lone, white flower standing straight up in the middle of their yard. Sarah said it took her breath away when she noticed it. “I couldn’t believe it,” she said. “I just began crying. I knew it was my grandmother telling me that she was watching over me and that everything was going to be okay.”

It is truly amazing that Sarah’s grandmother was able to deliver her message of hope by way of a lone flower standing in the dirt. I’ve learned over the years that our loved ones can do some amazing things. All we need to do is be open to the miraculous ways in which they can deliver their messages. Ask your loved ones for signs, and try not to decide how those signs should appear to you. You might just block all of the other miraculous ways they can let you know they are near. Be open to unlimited possibilities and allow the magic to occur.

Julia had it all: the perfect marriage, a great career, and near perfect health. She was at the top of her game with a thriving private practice as a professional speech and language pathologist. Without warning—and within a matter of months—her perfect life was turned upside down. Julia found herself on a downward spiral that appeared to have no end. All was lost. Or was it? It was at this depth of desperation and hopelessness where she found faith and learned to lean on God and the angels for support and divine guidance. Through a series of fortuitous events, Julia was thrust into the world of communication with the afterlife. Upon the passing of a dear friend, Julia opened up to a whole new world beyond her wildest dreams. In Stepping Into the Light, Julia shares her personal experiences communicating with angels, spirit guides, animals, and departed souls. You will find several fascinating and inspiring stories of personal accounts from many of her clients. After reading about Julia’s personal journey, you will believe that absolutely anything is possible. Your loved ones, angels, and guides can connect with you in miraculous ways when you allow yourself to walk through the portal of otherworldly connections and step into the light.

Julia Treat is an intuitive guide and expert in communicating with angels, guides, and departed souls. She is a master practitioner of EFT, Reiki, Crystal and Theta Healing, and past life regression. Julia dedicates her life to help others step into their divine light. Learn more at www.juliatreat.com.