Footprints – Walk With Me 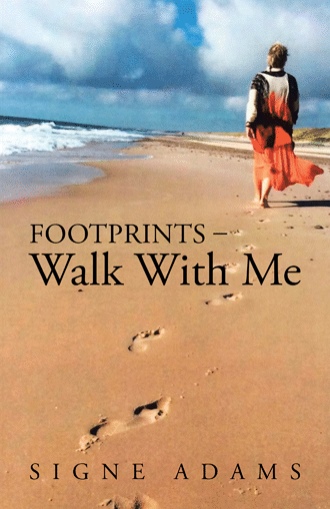 I am an exercise in irony. On the one hand, I am the product of a secure childhood, the eldest of three siblings, and confident in the assurance that my stable parents (my father a fish exporter and my mother a housewife until she turned forty) were there for me to call and come home to in Esbjerg no matter what misadventures, big or small, might befall, from failed love affairs to ethical dilemmas. I was lucky in my choice of parents. On the other hand, I have always experienced myself as somehow different from others, something of an outsider - and this existential loneliness became more pronounced as I entered adolescence. One aspect of this dissonance, and another irony, was my tendency toward silence. Reflecting back on my younger years, I was probably extremely observant and aware of others; at any rate, I was described as “very quiet … never says anything.” This declaration inevitably invokes skeptical amusement across the spectrum of friends, family, and acquaintances from my more recent life - and I don’t blame them! That early silence cost me. My chronic sore throats spoke up for my silent pain. Had I known then what I know now about the physical ramifications of emotional repression, I would have expressed my feelings. I would have learned to say, “No!” rather than having my boundaries violated. And violated again. And again. My education was neither what I had originally planned nor was it restricted to conventional definitions. Growing up working “in fish” at my father’s business every summer, I developed an understanding of how widely diverse people and their backgrounds can be. I followed up this early experience with the completion of my high school language exams, a full-year Niels Brock business course from Aarhus, more life experience as a pub waitress in Esbjerg and England, and finally legal secretarial training. I had intended to study psychology and archaeology - these were my true interests. But I decided to take a year or two to travel and applied for a job as a correspondent for the Foreign Ministry. I wanted to see some parts of the world and especially to go to the United States. I never did study psychology and archaeology. My career with the Ministry of Foreign Affairs, which took me traveling all over the world (five times stationed abroad), lasted twenty-two years. In 1978, I encountered another personal irony. When I took my first posting to Berlin, East Germany, I suffered from serious homesickness, which would prove to be an ongoing challenge for many years. The irony is that, while big changes are difficult for me, I can’t stand it when things become too static. It’s a confounding dilemma. Being in East Germany was an incredible and eye-opening experience. Having spent my entire early life in Denmark, I found it hard to comprehend that an ideology could rob people of freedom - personal freedom, freedom of speech - in a country just a few kilometers from my own childhood home. It was difficult to take in. I also had a hard time accepting that my life as a diplomat was so different. Driving through Checkpoint Charlie from East to West, I was driving through a gate into another world, and the contrast between these two worlds was severe for me. Another irony: I felt best in the East. There were too many Mercedes, too many mink coats, and too much food in West Berlin. It was a showcase of the West, and there was too much of everything. The difference was too great and made me feel ill. Although I was more comfortable in the East, I seem to have seen it all in a dull monochrome. When I returned in 2012, I was surprised to see how green the city was. There were the beautiful linden trees on Unter den Linden where the Embassy had been. The trees had been there when I was there; I just don’t remember them. I realized then how gray my experience had been. We went about our business as if in a bubble because we were not to have anything to do with the East Germans, and neither should they have anything to do with us. But at least I could understand what was happening around me and what people were talking about. I didn’t feel quite as isolated as I did many years later in Moscow, where, unfortunately, I never mastered the language.

This book is a personal and openhearted account of Signe Adams’s spiritual and physical journey through life and how a serious cancer illness became a turning point. This is a story of hope that provides insight into how it is possible to move forward after such a serious setback with new values and priorities and another way of looking at life. When you learn to listen, to be aware, and to summon the courage to take responsibility for yourself, there is hope. Such hope is a gift for the body and soul - your life!

Signe’s journey starts in Denmark in a city called Esbjerg, where she was born and grew up. Through her job as an executive secretary with the Danish Foreign Service she found herself, as a young woman, out in the big world with all of the various experiences associated with that way of living and working. A journey that physically ends when she, at a mature age, marries and gives birth to two children. However, simultaneously, the spiritual journey begins to really gather speed. Up to this point, Signe has mainly followed the adage that one should think about others before thinking about oneself. This proves to have near fatal consequences when Signe - despite the many warnings and signals her body has given her - chooses to continue to live in this fashion, putting herself and her own needs aside, until she is brought up short one day when the doctor says: “You have cancer. You know that can kill you!” That’s when she wakes up - and listens!