The Wee Folk of Yorkentown 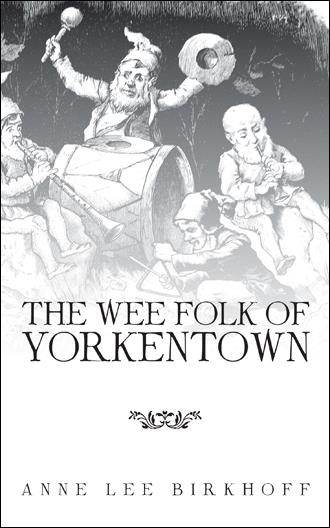 Rob held the frosty glass of lemonade to his flushed cheek as he swayed back and forth in the old wicker rocker on Grandpa Fritz's front porch. His brown wavy hair clung in ringlets to the beads of perspiration on his forehead as he leaned back and rested his lanky legs on the railing.

The early August day in Yorkentown had been a sizzler, but he knew the heat would soon be a memory as he gazed at the looming, cumulus storm clouds gathering in the hills to the west. Summer afternoon thunderstorms in Pennsylvania always cooled the air. As he sipped the lemonade, bolts of lightning darted across the summer sky followed by rumbles of thunder. A thousand one, a thousand two, a thousand three, he counted. A mile for every seond . . . . . If his calculations were correct, the storm was only three miles away in the foothills.

Looking down the dirt road that led away from Shady Nook Farm, Rob saw the old familiar white fence that surrounded neighboring Lilac Hill Ranch. The owner, Faye Trehane, had been a dear friend of his grandparents, Emma and Fritz Ziegler, for many years.

Aunt Faye, as Rob and sister Nell called her because she was more like family to them than just a neighbor or friend, had set out years before to save Dartmoor ponies, a specific breed that were found only on the moors in Cornwall and Devon, counties in southwestern England. For years she had sent large sums of money to the Dartmoor Pony Association to save the animals from the ravages of the hill people who had taken to slaughtering and eating them. During the past few years, Aunt Faye had started importing ponies not only to save them, but also to breed them.

Rob rose from the swing and stretched. Tomorrow, Aunt Faye's niece and nephew, who lived in Cornwall, England, would be arriving for their annual summer visit. He was anxious to see Jack. His sister, Nell, couldn't wait to see Bridget, Jack's sister.

In past summers, it never mattered to the twelve year old boys that their sisters were three years younger than they were. They had built treehouses together, fished in the pond on Grandpa Fritz's farm, and camped out under the stars in the pasture on Aunt Faye's ranch. But this summer, Rob had decided, was to be the summer of discovery. His eyes wandered back to the darkening foothills as he thought of stories his grandfather had told of coal mines that had been abandoned. The hills were calling him. But would the girls want the kind of adventure he was pondering for this summer?

Four young friends visiting their respective families in Pennsylvania for summer vacation embark on an adventure in an old abandoned coal mine. Who and what they encounter surprise them and the reader.

Anne Lee Birkhoff was born in Washington D.C. in 1945. She received her Bachelor of Arts degree from the University of Bridgeport, a Master of Arts degree and a professional writing certificate from Fairfield University. She taught high school English, Drama, and Journalism for 37 years in California and Connecticut. She is currently retired and resides in San Diego with her family. This is her first published book.