Cape of the Crone 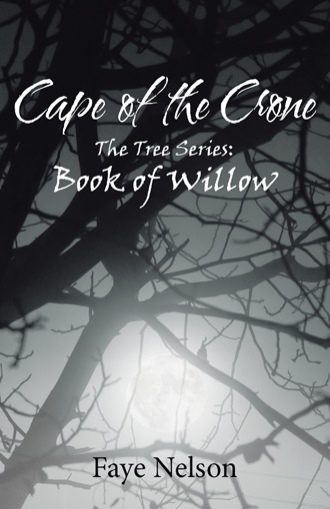 It’s been told by the priests of many stories that darkness is separate from light. The forbidden and eternal truth has borne its message into the marrow of man, locked in the same story like the sunrise and sunset, gently reminding us of the key to unlock the gates of heaven or hell.

There’s also a story that was once told by a priestess, but the prophecy was buried with her authority. It speaks to those forbidden and promises that one day, little by little, the people of the land will reach in before reaching out. They will take the hand of a feminine force by moving through silence into the void and touch the dark cape of night. As the last hand touches the cloth, it will cast as many stars as hands that reach for it, and the fallen angels will return to a bright light. The cloak will shine like a sun!

The truth is that reality is just the story we tell ourselves, for we are the creators of our story.

“There isn’t much time!” The shrieking in the distance stirred Fee and she tried to place a face with the voice. Wiping what felt like dust from her eyes, she slowly sat up and recalled an image of a woman with skin the color of sandstone. Fee had only been aroused recently upon witnessing the premature arrival of a hatchling…or had that been a dream? She felt dazed and the thought of another failed birth gave her goosebumps. The difference between dreams and nightmares was that dreams were fictional and a nightmare was real. Or was it the other way around? No, it could not be either, it had to be both. “But never mind,” she managed to whisper as she quickly waved her hand over her third eye in an effort to dismiss the thought.

Wondering where the voice was coming from, she awkwardly rose from her nest to her feet. With one hand, she stabilized herself by placing it on the inner root wall. The wall was slightly lubricated, though she knew how to hold a grip under such conditions. This was her home. The other hand pressed over her hair as if that was all it took to adjust what had felt like a very long and dark night. Was it morning? Had the light come? It still smelled the same and the scent of damp musk filled her nostrils. It was not yet dawn but perhaps it was coming. She could feel it and practically taste it.

“Mother Fee, please come now!” The voice called again and Fee was now completely awake. It was the Mother of Weaving. It was Weaves! Mostly dwelling on the surface of Earth, yet birthed from the underworld, she was a liaison of sorts and skilled at midwifery, strong in stature and possessing a suppleness of appropriate proportions around her bust, her belly, and her hips. Fee smiled and proceeded in the direction of the call. “I’m coming,” her voice cracked and she was uncertain if Weaves could hear her.

“Fee, I need you. Fee! Your sir wench is in trouble and you must come now, I command it!”

Fee’s honorable essence had diminished since the early time of Pisces and was eventually completely cast away, but life now demanded her presence. Her heart quickened and she picked up her pace, curious about what was creating all the fuss.

She moved in and out of darkened corridors. Occasionally a candle flickered from a bronzed sconce that was securely woven into the root wall. Fee longed for day. Not much had changed inside the terrain of gnarled roots. It was a maze really, but she knew it well, and navigated the dim passage until she found Weaves kneeling near the Dragon’s nest. A shawl was wrapped around Weaves’s shoulders, the texture resembling moss on the bank of a stream and weathered slightly like that of her face. A small fire had been lit in a kiva, the smell of smoke and the warmth inviting, but what was Weaves up to? Fee squinted, and moved closer. Weaves was clasping the hand of CadHla, the last NorJah of Willow, and she seemed to be offering medicine but there was minimal response. This was a tragedy! Not CadHla, not the last of Willow!

Momentarily, Fee was frozen by the reality before her--or was it another nightmare? No, she was awake and this was different, it was a dream and a nightmare. Still feeling confused, she focused on CadHla’s dreaded locks, interwoven strands of silver, gold and honey. They were shimmering with sweat and a portion of CadHla’s face was drooping as if a part of precious life had been removed. The other part of CadHla’s body seemed to be laboring. “A baby?” she whispered, surprised.

Stepping out of a shadow, Fee draped a black lace robe over her white dress. Forgetting to lift her wiry salt and peppered hair, which curled slightly as it descended to the floor, she practically stepped on it and almost tripped. Even in darkness, Fee brought forth an element of light. Her shadow sparkled alongside the floor and walls, her fair, yet creped skin, held eyes that had stars in them; she carried them as a dark force of insane love. Her stumble made her realize her forgotten grace.

The Tree Series is a collection of stories written by Faye Nelson. The author was inspired to write the series in an effort to mend her own suffering from what seemed to be the slow death of the divine feminine within. Through her books, she threads together the pieces of a fragmented and neglected force that is dying to be freed. Cape of the Crone: Book of Willow is the first book of The Tree Series which builds on timeless characters and supports the resolution of conflict caused by modern tradition. Throughout the series, the main character, Eli, chaperones the adventure of unveiling the hidden Goddess. She is guided to reclaim her destiny as a divine maiden on Earth while fighting the influences that press her to deny the underworld. This novel offers the reader the opportunity to experience life and death within a format that confronts good and evil. Awakening the greater self, regardless of existing conditions, is generated through the struggle of Eli’s initiations. Its message reveals rites that openly address the formal conclusion of religious attempts, and calls forth the political possibility of magick expressed by our spiritual nature. In this revealing and soulful novel, raw awareness and blind faith shake illusion as a feminine voice of the underworld redefines the archetype of darkness. The feminine face of God is alive and well as She gains momentum in speeding the blessing of humanity!

Faye resides on the central plains of the Rocky Mountains where she fondly reflects upon the love and connection she has established with the subtle rhythms of nature’s cycles. Spring, summer and fall are uniquely glamorous as the generous Earth Mother affords an opportunity to prepare the kitchen. However, the winter challenges her, as each one passing asks her to go deeper. During this season, death prepares for birth, requiring stillness to move forward. It is the void, the dark canvas, and it is where the soul rests and dreams of what will be. Aspiring to bring discernment to the sacred ground we walk on, her life’s work, regardless of the industry, is driven from a force beneath her, expressing itself to the light surrounding her. Maintaining that spiritual bridge engineers do not need certifications, degrees or to be ordained, she is committed to creating awareness within the social circles of this day. Her vision for humanity is one of unity, and, this too, is her faith.