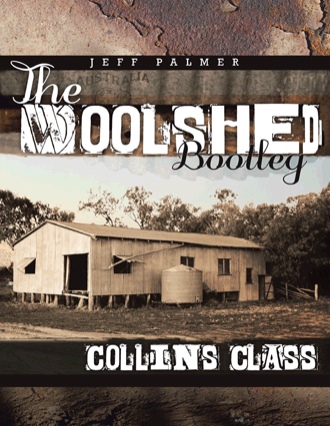 It was during the last weekend of August 2011 we planned to record the 'Woolshed Bootleg'. A bold endeavor since we had committed to help our friends 'Last Call' release their Debut EP at the Palace in Redcliffe, following a night of 4 hour covers show at the Irish Club Toowoomba, then traveling to my family farm 'Willawood' out in the North/West of NSW, not too far from the of town Wee Waa for recording. Roughly a 1300km round trip, 3 days, 2 gigs a 5 track recording session, not to mention what comes along with any Collins Class gathering, plenty of booze. It was a radio spot on 4ZZZ in Brisbane that gave the idea of style. Collins Class loved to rock and though we played loud and crass this wouldn't sit well for an unplugged live spot on air. So after re-writing 'Out on your Arse' from EP 'Venus Alley', into a laid back country-esk style tune it was only fitting that the project would be dubbed 'The Woolshed Bootleg'. Taking on the style and the airy nature of the shed, the missing piece came from the top of Tambourine Mountain. Thor Phillips audio engineer and producer jumped aboard along with his background of country music, ability to shred and pull great tone. This completed all the components of making the record, besides the small details of rehearsal, writing the songs and of course the 5hrs of rocking and near 500 miles.

Three-piece rockers Collins Class are at the forefront of the Queensland music scene with their sweaty, explosive, modern alt-rock style. Jeff (lead vocals and drums), Chad (guitar), and Gaz (bass) have built their signature sound around tight grooves, addictive melodies, and the swagger of youth.