The Body as Shadow 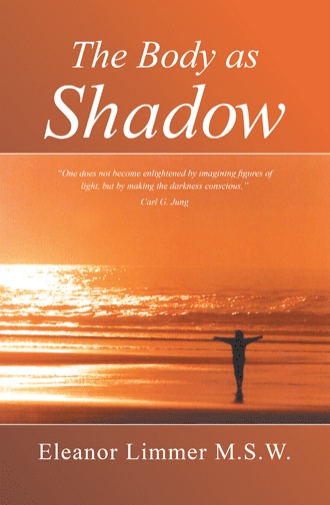 It is not an option whether of not we deal with our shadows. If we don’t deal with our shadows, in time our shadows will deal with us. If we ignore and reject exploring and doing shadow work, both dark and light, in time the shadow will deal with us in some way; one way this can happen is through illness and physical pain. This is not a punishment from forces outside ourselves, but another way of making us more conscious and responsible for the purposes we committed ourselves to in this life and before our birthAs part of our soul, the shadow is an aspect of our souls, with a higher consciousness that intimately knows us. Just as dreams dramatically address the issues of the dreamer, so do physical ailments accurately symbolize the conflicts of an individual. The shadow holds our patterns of greed, envy, control, manipulation, and self-abandonment until we are strong enough to release and transform them, but the shadow itself is not dark and evil. Kate Duff came to think of healing from her illness as an alchemical process in which it was crucial she be vulnerable to the most inferior or debased places of herself. When she developed chronic fatigue and immune dysfunction syndrome (CFIDS) in l988, she soon became aware that she was experiencing a profound transformation in which she would never again be her “old self.” CFIDS is an illness that seemed to her like a bad flu that never went away. As the only remedy for this illness is prolonged rest, Kate for the next two years spent much of her time in bed. During this time she had much time to reflect upon the meaning of her illness. At one point, Kate fell into a deep despair which was accompanied by clear and revealing dreams.An important step in the process of alchemy is that of resolving the opposites by facing the dark shadow to find the light that is beneath it. One of Kate’s dreams encouraged her to make a place for a pack of black dogs-her shadow issues of despair, greed, envy, and hate-at the end of her bed. In another dream, she was told she could not get gas for her car until she admitted her greed. This shadow issue was difficult for her to face because greed was a quality she detested in others. Eventually Kate recognized the part of herself that was greedy for books, money, and food. She recognized that since it was greed she had to put in her tank, under this greed must be a luminous light energy or intent, her strong desires for understanding that were the opposite of the darkness of greed. It was this realization and her strong energy of desire that cracked the shell of her despair and helped heal her of her illness. Kate was healed not only of her illness but in the process became a more self-realized individual.Physical symptoms and illnesses are challenges made visible for us through the symbolism of our bodies. Our bodies are both responsive and resilient in reaction to our thoughts and their related emotions. If we hold the belief in a division between the mental, emotional and physical, we are misunderstanding the relationship of human consciousness to illness. The traditional belief that disease is only physical does not allow us to have a true perspective of our reality and hides from us the shadow conflicts and problems these symptoms can reveal. The error of the limited perspective of a purely physical approach to illness lies in its deficient understanding of the spirituality of the body, and the physical reality of our thoughts and beliefs. Through my work as a holistic counselor and guided imagery and music therapist, I have had direct experience of the dynamic power consciousness has to heal the physical body from all kinds of illnesses. I have learned that the energy of healing can be directed by our thoughts and images to heal any kind of illness and at the same time dismantle the core shadow beliefs that foster it. To work with our shadow selves in a successful way, we need to listen to the whispers from our bodies so they do not have to come to us in the shouts of a life threatening, debilitating illness. Before a major illness such as cancer or heart disease happens, we have had many more subtle warnings and messages from our bodies. These whispers tell us to wake up and forgive ourselves, and to accept and change aspects of ourselves so we can grow and become more of who we were meant to be. We are not the victims of our illnesses, and we do have the power to heal ourselves. Illnesses are challenges and warning signals, much like those on the dashboard of a car, messages that tell us we have made an unfortunate detour. They are wake-up calls telling us to pay attention, to be in the moment, so we can become aware of a problem we need to heal. If we ignore these messages, they become more extreme and life threatening. When we resist other gentler warnings, growth can not occur. Our physical bodies challenge us to learn the lessons we have agreed to face in our lives. By denying those aspects of ourselves such as illness and pretending we have no power to heal ourselves, we also miss the opportunity to consciously and actively heal ourselves. If we view illness as something that just happens to us over which we have no influence, we are stuck in the same unhealthy patterns. Illness can be faced in responsible healing ways that allows us to change our reactions to the factors that lead, for instance, to such things as a dysfunctional immune system. The failure to take an active responsible role in our own life may lead to heart attacks and early death.

“The Body is very often the personification of this shadow of the ego. Sometimes it forms the skeleton in the cupboard,” wrote Carl Jung, “and everybody naturally wants to get rid of such a thing.”
Through the symbolism of illness and physical symptoms, our bodies reflect the darkness and the light the shadow holds for us until we are ready to accept it. It is the shadow-face of our souls that holds the light and the darkness until we are strong enough to face and heal what we have previously denied or rejected about ourselves. Our bodies and their ailments are not our enemies, and neither are our shadows. The shadow reveal the negative ego patterns we had previously rejected or denied, through the messages of our illnesses, so we can recognize, forgive, and heal them. The shadow is the ally of our true self and the enemy of our negative egos.

Eleanor Limmer is a clinical social worker with more than thirty years of practice focusing upon listening and healing the messages of illness using guided imagery, music, and symbolism. She is a poet and writer. She has a master’s degree in social work from the University of Washington. She has written four books about holistic health and wholeness. She lives with her husband, Don, near Liberty Lake, Washington.

Other books by Eleanor Limmer:
• The Shadow Knows: How to Understand and Heal It Messages• The Body Language of Illness• Blooming: Reaching for Self-Realization• Balance: Beyond Illness to Health and Wholeness• An Alchemy of Joy
Cover photo is of the author in a lighter moment taken on the Pacific Ocean by her husband Donald Limmer.