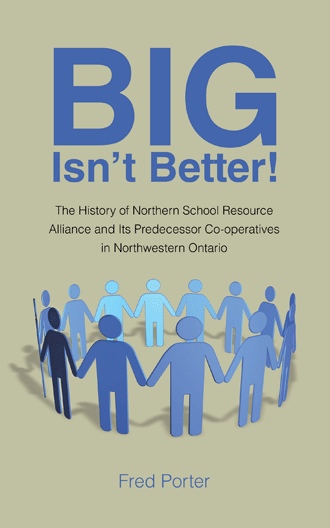 This is the history of the Northern School Resource Alliance and its predecessor co-operatives in Northwestern Ontario. It is a story born out of a concern for the quality of education in rural and remote parts of the region. It is a story of a lack of resources at the Ministry of Education’s Regional Office in Thunder Bay and a directive to reduce or eliminate direct services to isolate school boards (as defined in the General Legislative Grant Regulation [GLG] as having fewer than 300 pupils).

Born out of necessity was a co-operative effort of French, English and Aboriginal isolate school boards, both public and separate. What started as a small Co-operative Services Unit of the Umfreville District School Area Board [DSA] in 1977 grew into a non-profit Northwestern Ontario School Boards’ Co-operative Services Program in 1990 and finally the Northern School Resource Alliance in 1997.

During the years from 1977 to 2010, the co-operatives provided both direct services to pupils (i.e. Territorial Students Program) and second level services to the school boards from professional development to financial services to classroom support for teachers.

While in its infancy, the Ministry funded those services and often the isolate boards had little say in how the service was delivered. Over time, this evolved into the isolate boards, renamed in 1996 as school authorities, choosing to be members or not of the Co-operative. Members paid an annual membership fee and were provided services at cost. Non-members paid no membership fee and were charged 20% over cost for services. A board of trustees selected by trustees of member boards governed the co-operative. The Ministry of Education funding model provided the school authorities with both funding and choice. The co-operative model provided the school authorities with choice, autonomy and support.

What follows is the details of that 32 year journey.

This is the history of the Northern School Resource Alliance and its predecessor co-operatives in Northwestern Ontario. The book details the challenges faced by small schools in remote parts of the region and the need for a creative solution to ensure that schoolchildren have the same opportunities as those in larger urban centers.

The book details the collaborative work of English, French and First Nation schools and boards. Through collaboration, co-operation and the use of technology, high-quality education is provided for the children of small remote schools.

With more than forty years of experience in education in Northwestern Ontario, Fred Porter is passionate about children in small communities receiving the same opportunities as children in large cities. Thus, his time as chief executive officer of the Northern School Resource Alliance and supervisory officer of several small, isolated school boards provided Fred with the opportunity to ensure those children had the best education support possible.