Surrendering: When Pain is Transformed into Extraordinary Blessings 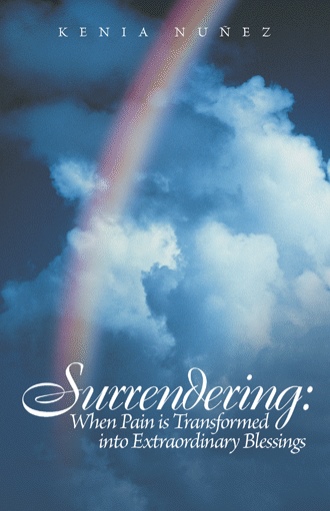 To the world, she appeared to have it all: a loving husband, three beautiful children, a gorgeous house, a secure and fulfilling job, a contagious smile, and a hip attitude—but did she? After years of secretly running on empty, Kenia Nuñez spiraled into a depression that would threaten her grasp on life and nearly destroy her marriage. It was not until cancer came after her strong, athletic husband did Kenia realize that life is meant to be lived with purpose and enjoyed to its fullest extent. Her story inspired hundreds of Facebook followers as her posts brought them along her roller coaster journey of discovery.  Written with poignancy and sincere empathy, she chronicles the first eight months of widowhood. The reader soon understands that her beloved John-Marlon is her angel sprinkling miracles along the way. You, too, will begin to believe that we each have our own unique guiding light urging us to take positive, transformative action here on earth. This is a must-read for anyone touched by uncertainty or pain.

Kenia Nuñez lives with her three children in Long Island, New York. Kenia is a wellness coach who inspires women to transform their lives from the inside out. To learn more about Kenia’s mission to help women find sexy, fabulous inner peace, please visit the official website: www.kenianunez.com