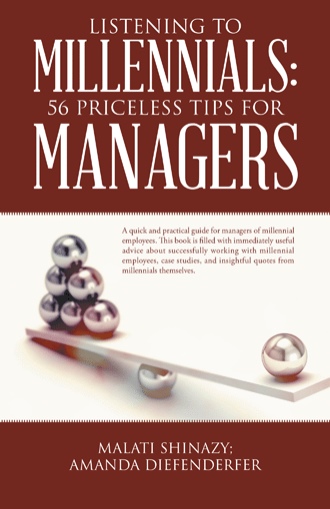 Chapter One Confessions Of A Baby Boomer Manager: A Book Is Born “This woman is driving me crazy. If she hates her job so much, why doesn’t she just quit?” Did that thought come from me? Well, yes, actually it did. I am a goal-driven, get-it-done manager. And, I wanted to scream almost daily, each time I heard from my twenty-four year-old administrative assistant: “I just got my bachelor’s degree. I should be running a department, not just being an administrative assistant!” Eventually I would cool off and no longer consider the silly idea of jumping out of our office windows. Yes, that is how desperate I felt. We were on the first floor and the windows did not open! Still, for a nanosecond, I would imagine myself diving right through them, screaming, just to get away from her incessant complaining. When she stopped and I calmed down, I would sit down and chat with her and acknowledge her perception and needs, putting to use all the active listening skills I had been practicing for decades. I tried to assuage her restlessness by telling her that we all started somewhere, we all “paid our dues” and moved into jobs requiring increasing responsibility. I encouraged her to shadow other staff in our department and elsewhere in the company. I suggested she take free online classes in the field of her choice in order to boost her qualifications for the higher-level jobs. I told her everything I heard when I was a young employee and promised to do anything she needed to help her progress. But still she groused and grumbled. Meanwhile, I inwardly cycled through the four versions of expressionist painter Edvard Munch’s painting, The Scream. Eventually she quit and I hired an assistant ten years her senior. Whew, I realized after a few weeks – everything was getting done and the entire team was now a group of relatively happy campers. There are always going to be process and deadline stressors at work, and our department was no different than any other in this regard. However, these stressors now existed without the daily verbal laments and contagious unhappiness of one young employee. A few years later in the learning and talent development department at another company I had the opportunity to do the millennial employee and baby boomer manager dance again. This time, however, my millennial staff member, Nikie, wanted more. She was indeed the sponge my executive vice president of human resources told me she was. I was in awe of her, and yet again I was inwardly screaming. My sense of self as the perfect manager was shattered. I knew something was going on that I had better figure out before this hyper productive and sensitive wizard brought my entire department down. Or worse, she would quit, taking her brilliant talent with her. On the way to work one day, dreading whatever fussing I was going to have to face from anyone at the office that day, I had a moment of clarity. The voice of my mentor, Dr. George F. Simons, whispered to my manager-brain: “This is a cultural diversity clash! You are a diversity and inclusion expert. Treat the situation the way you would any other diversity challenge.” I remembered his definition of culture: “Culture is a set of rules, developed by a group of people for survival and success.” My epiphany? My young employee and I were in the same work group, with the same business goals, and spoke the same American English. However, we were operating from different cultures! As the manager, I needed figure out the rules for survival and success for this bright go-getter or she would be off to another job at a competing company. The truism, “employees quit managers, not companies,” replaced my inner scream. With determination, I decided not to let that happen. As in the classic cultural iceberg, a person’s behavior represents only 10 percent of who they are. The other 90 percent is under the water line, invisible. I needed to understand what was below the actions and behavior I was witnessing from Nikie. From understanding her multi-dimensional cultural beliefs, values, biases, attitudes, and perceptions – as well as developing a better understanding of my own – I could start building a cultural bridge on which we could both work well together. … Priceless Tip #1 Use the cultural iceberg framework to understand your millennial employee on a deeper level. It is more effective than inwardly screaming. … I read all the academic, big-consulting company, and government studies on employees alternately known as the “millennial generation,” “generation y,” or the “echo generation.” I chatted with other managers about what they were doing to work effectively with the members of this group of young employees. More often than not, I heard frustrated variations of what the academic data was telling us, that these employees are a challenge to manage. Here is one such comment: “I don’t call them the ‘millennial generation.’ I call them the ‘entitlement generation.’ They want everything! And they want it now!” … Priceless Tip #2 Do not hesitate to ask peers for their ideas. Just don’t be surprised if they know less than you do. … With a lot of effort and sincere dialogue, my young employee and I developed a highly productive working relationship. She told me that she did not want to be just a sponge. She wanted to be squeezed, challenged, and given more responsibility with mission-critical assignments. I started to look for such opportunities for her. I was sure to set clear outcome expectations, coach her a little, provide her with resources, and then let her run – yet always be available to answer her questions in a text message or within our weekly one-on-one meetings. Sometimes, I just needed to provide her with reassurance that she was on the right track. … Priceless Tip #3 Sincere dialogue means we listen deeply more than we speak.

Listening To Millennials: 56 Priceless Tips For Managers is a practical guidebook for managers, filled with immediately useful advice about collaborating with millennials – and sprinkled with insightful quotes from millennials themselves. Each chapter describes common challenges, case studies and, most importantly, tips that will gain you lasting results successfully managing your millennial employees. A quick and fruitful read for managers in any sector who want to shift the balance from stress to success —so they can enjoy managing their youngest employees. —Malati Marlene Shinazy, MEd

Malati Marlene Shinazy is a baby boomer manager and founder of Pacific Leadership Consultants, experts in organizational development, diversity, inclusion, and leadership. She runs workshops and coaches managers who aspire to be top performers. (photo by Pam Forrest) Amanda S. Diefenderfer is the millennial proprietress of Big Red Marketing, specializing in wine, lifestyle, and tourism. (photo by John Patrick Images)