“WHOEVER HEARD OF A PURPLE HAPPY TREE?” 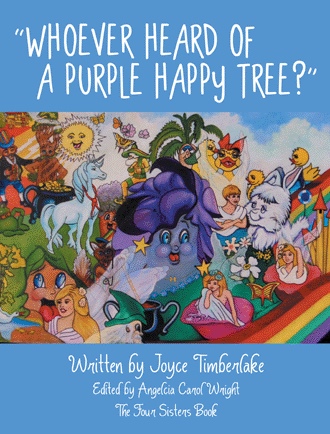 The Happy Tree’s SMART CORNERThe Happy Tree is just like you and me. He laughs, He dances and he has fun.And once in a while his brain kicks in. He calls this his “Brain Storm”.When this happens he will have an answer for almost any question you could possibly ask him.Question: Why does it look like its raining frogs?Happy says, When the sun shines bright it pulls up the water from the lakes and puddles. The water turns to vapor and the water forms clouds in the sky. But tadpoles live in the water and some of them end up in the tops of trees and even the clouds. The tadpoles grow up to be frogs, so when the water drops stick to each other and gets heavy it rains and it falls back down into the lakes and puddles. It may wash them out of trees it may wash them out of the clouds and then it looks like it’s raining frogs, because it is raining frogs!

The Happy Tree is a mischievous, lovable little creature who is an outcast from his forest home because he accidentally started a fire with a “magic glass on a stick” (magnifying glass). In the process of trying to save the youngest Joy Baby, Angie, the Happy Tree uses the leaves on his top knot to smother the fire. But something terrible happens! His leaves change from green to purple! When this happens, he becomes a social outcast with the tree town elders. The Happy Tree is the Joy Babies’ constant companion.

ABOUT THE AUTHORJoyce TimberlakeAuthor, Artist
Happy Tree books, songs, videos, and related products. Lecturing, storytelling and demonstrating the art techniques she used in the books is part of Ms. Timberlakes' agenda. Educating children about the reforestation project and the importance of trees is the main slant of her lectures and demonstrations. She travels nationwide attending trade shows, art shows and festivals promoting and selling HAPPY TREE products for infants, toddlers, teens and adults. The national theme is "Everybody should have a HAPPY TREE by Joy. Joyce Timberlake has been featured in several national publications and was selected as one of the nations' leading artists to be represented in "Artists'USA," on several occasions as well as being recognized in: "Women Artists' in America," "Who's Who in American Art" "American Printmakers" and the "13th International Annual Book."Altogether, there are 23 books for children and 100 songs.Joyce Timberlake conceived the idea for the "HAPPY TREE" in 1964, when her "Joy Babies" were toddlers. Being an artist and a writer, she remembered thinking, "Oh, that's so cute!" when she drew a tree skipping down a hill holding hands with two children. She immediately drew a happy little face on the tree, and the HAPPY TREE was born.Joyce Timberlake is a nationally known wildlife artist and has been involved in conservation programs for over 20 years. She has had three television series on art, published art magazines, and served as art critic for several newspapers. She has owned and operated several art galleries and schools and has taught as many as eight different subjects to upwards of 120 students per week. She began teaching art in 1965 out of her home studio which eventually led her to open her own art school, The Timberlake Art Academy. In 1990, The Timberlake Art Academy closed in Virginia Beach, Va., and Ms.Timberlake became the Director of the Americana West Galleries on Connecticut Ave in Washington D.C. She is part Cherokee Indian which enabled her art to fit well in the Indian theme of the gallery. During this period she free-lanced with the Department of Commerce as an art appraiser.Returning back to her native home of Hampton, Va. The artist reopened her art studio after many requests.
The EditorAngelcia Carol Wright
The following songs were written by Ms. Wright and recorded for the Happy Tree Series;Take Time For The Children Song Of The Rainbow, The Happy Tree & Take Time for the Children. Carol has won many awards for her photography and her writings. She has also written many other songs which have been recorded. Her current list of books written and published:Ghost Ships Of The James RiverWhispering Wings, My walk with GodCandy,My dog.Orbs, What are they?Visions Or Dreams