Out of the Mists 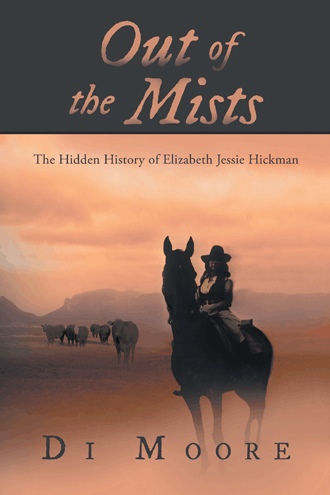 Next morning, Mum was grying again but she dressed me in my best clothes and took me down to the circus where they were all packing up. I only had eyes for those lovely horses until Mum turned me around and said, “Jessie, you are going to live with this show from now on. You love horses so you should be very happy living among so many. Just remember Hector and I love you too and will miss you dreadfully. Go on now. You belong to them.”

I should have known better. With tears in her eyes, Mum repeated that she loved me but said she could not afford to keep Hector and me too. So I stood there in the cold with tears running down my face, and watched Mum and Hector walk away. Somebody took my habnd and gently led me away to my new life.

I was eight years old.

Elizabeth Jessie Hickman, portrayed in recent years as the infamous Lady Bushranger of the Wollemi Valleys of New South Wales, had a very colourful life. Hers was a world of bush carnivals and buckjumping, cattle duffing, arrests and escapes, gaolings, reforms and more. Exposed here for the first time is a tale of deception surrounding a newborn infant, relationships, divorces, love, hate and heartbreak all mingling to create the complex life that was Jessie’s.

Her granddaughter, Di Moore, was sixty-seven when she learned the truth about her biological grandparents from an elderly country saddler. By the time he had finished talking, Di’s perception of her family’s history was shaken—and her curiosity aroused. With the enthusiasm of a new family researcher on a mission, she began to look into the life-changing revelation she heard that day. With no prior inkling of what her inquires might uncover, she entered a world that had remained safely hidden in that well-stocked cupboard of disreputable skeletons. It is said that truth is stranger than fiction, and Di’s research has given her new appreciation for that aphorism.

Out of the Mists is by far the most accurate account of Elizabeth Jessie Hickman’s unusual life, compiled with respect and honour by her own granddaughter. This is Jessie’s true story—warts and all.

DI MOORE, the granddaughter of Jessie and Ben Hickman, is a retiree living in the Riverina in New South Wales, Australia. In addition to family research, she enjoys spinning, knitting, tricot, and reading.