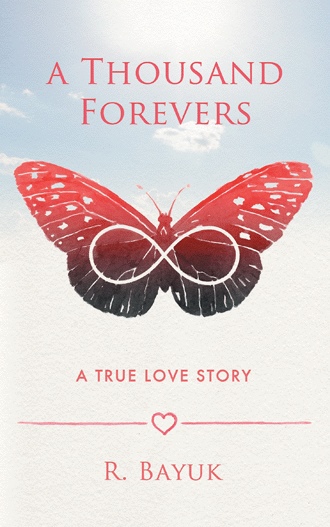 There has always been a voice inside me that said, “you can’t do it!” Writing a book
seemed so daunting, but after four years, that voice has been silenced for a moment at
least. After the death of my husband, G, I found letters we had written to each other during
the two year separation before we were married. After re-reading them, I knew that these
letters were not just for me, but for everyone who has ever been in love or who has
searched for love.

These letters show that true love can withstand the test of time and space; that true love will
over-shadow and endure far beyond what society thinks is proper or acceptable. I am
sharing this story for the impossibilities that come up in your life and for all the limitations
you face. This kind of love will overthrow the skeptics and self-righteous judges of “what is
right”. This was and is our kind of love.

G's letter to R:
Dear R,
Eyes wide, face pressed against the window, he watched, he wondered. Filled with
seasoned impatience (carried across oceans of time), nine years old, going on a
hundred, he waited for the moment that would chart his course for this lifetime.
Eternity paused as the car pulled in the driveway and the four passengers moved
through the front door and into his heart.
Excited, awe struck, the nine year old met: his uncle, the jovial giant who made
everybody laugh; his aunt, the mere mention of whose name brought joy to the boy’s
father; his boy cousin, the man/child who would spend summers and holidays as the
boy’s mentor of mirth and mischief.
And then the hundred year old, now going on a millennium, looked into the eyes of the
girl: his cousin, his sister, his mother, his wife; his friend, lover, heart and soul; his
destiny.
The fire ignited: the fire that understood the impatience, for they had travelled the
oceans of time together.
Did she feel it too? Did she know? How could she not? After all, they were two halves
of the same circle.
For both, the awareness, the understanding grew, incubating in the winters of
separation, blooming in the summers together.
In their early teens, they dared to voice the words their eyes had spoken from the
beginning.
Sleepless nights were spent talking of dreams and impossibilities, love that overflowed
from their hearts and gave meaning to the existence of their souls. Holding each other,
they felt the fullness of life made whole only by each other’s touch. They kissed, melted
into oneness, and gazing into each others eyes; they constructed their own universe,
free of the constraints and illusions of this one.
Their late teens suffered the impositions of society’s reality and expectations. The
impatience found a time to rest; and the fire returned to smoldering embers, waiting for
the time of renewal.
The renewal came thirty years later.
Eternity paused as the car pulled in the driveway. The rest of the world disappeared as
she walked toward him.
As she reached to hold him, her eyes spoke first:
I’m here. For you. I’m yours.
I always have been
I always will be.
Her voice said, “I never want to let you go.”
He said, “And I don’t want you to.”
United with her in mind, heart, body and soul, he finally understood. she never had let go,
and never would.
Love always,
G

Letter from R:
To my love, G,
From first sightings and stirrings of great desire and new found love, to commitment, focus,
new directions, life shocks and spiritual awakenings, that, my dearest one, has been our
year.
The year we took the risk to face our feelings about each other; the year we put our selves on
the line and bared our souls. Feelings we’ve stuffed for 26 years or more; feelings that fear
kept captive for the better part of our lifetimes, have been uncovered and set free. You have
peeled off my outer shell. You’ve cut away and chipped and jack-hammered the walls that
have been up for so many years.
Through your patience, your loving heart, your enlightened understanding, you’ve captured
my inner soul and spirit. You’ve increased my capacities to love and make love; to give and
to receive; to be in control and to give up control. You’ve set my mind free to be inquisitive,
questioning; to expand into being a broader and more inclusive thinker. You’ve given me a
love only dreamed about -a love I’ve never known before; a love that is returned in kind. This
is a love that will and has stood the test of time. I can’t see into our future, but I have learned
that the love I feel this moment is real, alive, blooming, growing and impatiently waiting to
have you in my arms.
I know the pain of losing a precious gift that a loved one has given. But the truth is that good
can never be lost - we need no mementos of each other. We cannot be lost or separated from
each other - not ever.
And so my love, take this gift of words and heart and remember them. Store them in the safest
of places - your mind, your heart, your soul. There they will remain for an eternity.
You are my one true love--you are my other half of our circle; my soulmate. You are
everything I want, need, desire, crave, adore, respect and honor.
All my love,
R

This is a true story about a secret love, forbidden by society, which formed in childhood but was born from lifetimes of being together. It is told through letters in a loving, intimate, and soul-searching way. Their story is unique yet worldly, showing they overcame all odds in finding each other again.

The writer seeks the highest level of truth for herself while learning valuable lessons in life through her struggles with guilt and shame to ultimately learning the meaning of unconditional love. This is genuine and written from the heart.

The illusions of time and space cannot, will not keep us apart. I long for the moment our purpose, our constancy, and our commitment will bind us physically together. Until then, I rejoice in our unbounded love, our eros, our agape. I thank God we were blessed with each other to share eternity.

This love had smoldered like hot coals and could no longer be denied. It was now a full-blown fire, consuming and burning everything in its path—my reality, my ego, and a twenty-seven-year marriage—with one look, one embrace. This vessel, my soul, was now emptied of the years of servitude to my inauthentic self, and I was spent with exhaustion. —R

Randy Bayuk's first book is a memoir of epic proportions, digging deep on a personal level, covering everything from broken marriage vows, betrayal, and desire to unconditional love and forgiveness, all told through letters. It is brutally honest and heartfelt.