by David A Massey 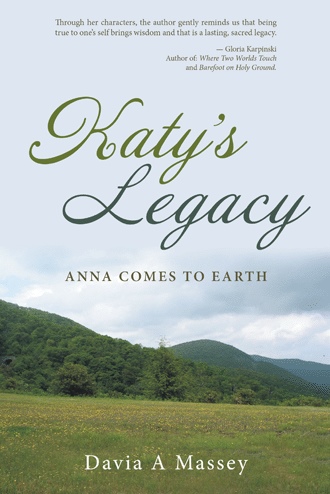 Anna and the Meadow

Anna sat with her father under an old maple tree at the edge of a beautiful meadow. Tall grasses were bending in the wind. Little yellow flowers dotted the trail winding through the wide expanse of the field. The breeze felt cool as it blew her hair against her forehead. She felt safe, relaxed and secure as she waited. Her father’s arm encircled her small body and tightened around her as he prepared to read the story he had written for her. His voice was soft and warm as he said, “This is a very special story about a little girl named LeAnna.” Anna knew that LeAnna was her own birth name. She faintly remembered that her mother had called her LeAnna but her father had always called her Anna.

He opened the old, blue notebook that he had carried under his arm on their trek to the meadow. He turned its handwritten pages, took a deep breath and started the story.

One day in the World of Spirit, the awareness that was LeAnna had a desire for life in a physical body on Earth. She was sitting by a clear stream on a hillside when she sent her request to the Creator of All.

She had a clear sense of many life times on this beautiful blue planet called Earth. Her attention was especially pulled to the blue of the sky and the misty green of a meadow. She remembered holding her finger in the path of a tiny ant and slowly raising it in front of her. It was wonderfully and beautifully made as it held its body aloft on its six tiny legs. Its little antennae searched the air. Then, she had lowered her finger and let it crawl back onto a leaf in the meadow.

Amid these loving thoughts of Earth she also had a sense of the pain, hardship and struggle that were possible in that dimension. She recalled times that her heavenly dimension was only a faint impression in her heart as she struggled to know.

LeAnna’s connection to Earth was strong and her deep passionate love for it was evident as she communed with the Light of the Creator to establish her intention. She garnered a clear picture of how she would seek to serve Earth and Others during her journey. She would play, experience the joys and meet the challenges of that dimension. She knew the Light of the Creator would reside in her heart. A part of her journey would be to find and recognize that Light within and bring it forth to help others connect with their own inner Light. LeAnna would have many choices about how to live her life on Earth.

LeAnna was fully aware that she would forget much of her present knowing when she entered the denseness of a physical body. Her intention was strong and her current dimensional awareness was left in the care of loving being. She chose entry to Earth through birth to human parents—and she forgot.

Her father stopped reading and sat quietly for a long moment. Anna didn’t move. This story held a strong fascination for her. She did not fully comprehend it all but the words felt magical and the peaceful knowing tone in her father’s voice held her within the grasp of the moment. He returned to the story.

It has been almost five years since LeAnna came to earth. On one sunny earth day she sat with her dad on a blanket, under a young maple tree at the edge of a most beautiful meadow. It had tall grasses blowing gently in the wind. There was a path winding around the outer border of the field, just under the shade of towering trees. A pathway meandered back and forth through the middle of the meadow. It felt magnetically peaceful and so filled with life and love.

From time to time small rabbits and field mice peeped out of the grasses to hop or creep onto the open space of the path. Ants built pyramid shaped houses as they went about their daily business of living.

Anna sat quietly and looked up toward the sky listening closely to her father’s words. Then she said, "Daddy, who is the Creator?" He smiled and said, "The Creator is Light and Love Anna. There is a presence you can feel in your heart, an ever present Sound and an inner Light you can see. We have a physical body that we can touch and see and also a presence we can sense within us. When we feel love for another person or an animal we are connecting with that presence.” An inner smile passed through him and he said, “Your inner world will mature just as your physical body is growing Anna. Each person has a part of the Light within them. It is the Presence of the Creator of All. Everything is a part of that Presence, but each person has to allow it to awaken. He hugged her lightly and continued.

Upon hearing about the ants, LeAnna bounded out of her father’s arms and was up and off to explore the meadow—her present part of the world. It was so good to feel the warm sunshine, to smell the honeysuckle and see the tiny, purple flowers growing amid the grass. She looked overhead and saw a falcon sailing lightly through the air. It all seemed so right in her world and so familiar. In her five-year-old mind she wished she was flying with the falcon.

After a while her father called, "Come LeAnna, it is time to go." She didn't want to leave this wonderful meadow. She lingered in its safety. Her father called again with a firmer voice and she knew she had to go. She ran to hold his hand as they walked through the grass to the trail toward home. She said, "Daddy can we come here again?" He squeezed her hand, smiled inwardly and said, "Sure LeAnna, we'll come again but you can travel to this place anytime you want in your awareness. Just find a quiet place, close your eyes and come back into the meadow with your thoughts. You can play and just be with yourself and your memories.” (The End)

“A story that drew me in and gave me a tangible, personal landscape to explore spiritual principles as experienced in the lives of the characters in the book—simple lives well lived that could easily apply to any of us. Anna’s story is a journey and a legacy of love, the most important and only thing any of us leave behind.”

—Christopher Tims, renegade mystic and founder of The Order of the Blue Star

“‘Maybe all of life is a story,’ Anna’s father says to her in one of their early birthday talks in a mountain meadow, a place that becomes both setting and metaphor.

How does one tell an engaging tale of several generations without including hundreds of details about each era? Katy’s Legacy is a demonstration that it can be done in the hands of a skillful writer. This story within a story—within yet another story—flows naturally from one generation to another with gifts of wisdom and love passed down into new life interpretations.

The reader settles into this book as effortlessly as curling up on a comfortable couch. Told cleanly and clearly, the story underneath the facts and passing events in the lives of the women is a universal story of change and constancy and the power of spiritual truths. Through her characters, author Davia Massey gently reminds us that being true to one’s self brings wisdom, and that is a lasting and sacred legacy.”

Davia A. Massey has long had a penchant for writing and an affinity for nature. After a long career in higher education, she now resides in the Blue Ridge Mountains of North Carolina on the farm where she grew up. Retirement will never entice her as she continues to be involved in many of her lifelong passions.