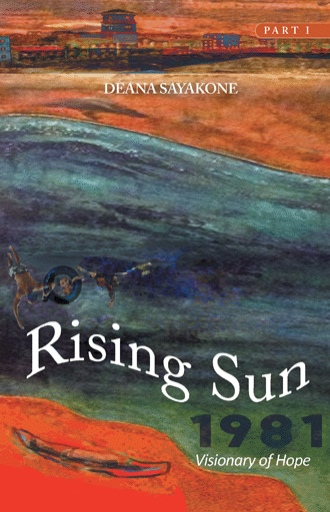 My entire body was red, I screamed and cried for seven days straight; that is the way I entered this earth. So my chosen named was Dang, it meaning red in Laos. I am lucky to be alive though, because the umbilical cord was wrapped around my neck three times, when the time I had came out as a new born and my mom thought I might die because I would not take anything, not even milk, my mom has told me that everyone in the house were frustration, because of my behavior at that time; in clued my grand mother she has stay up to help my mother for many days they’ve all tiers, but it the way that I was came, that some how my hole family were take tern to watching over me day after day they did not give up on me, they’ve try everything and anything to helping to be able to survive for that seven days!   That I just don’t know what to say when I hear my mom told me this story of my own life; why someone it lucky and someone doesn’t?  Like my brother, but she was able to provide for me so that I would be able to live, let get to the story that I just began, and you will see why someone were lucky?  Her first-born was not as lucky as I was; my mother lost her first-born son after only seven days.  Three years after that, she gave birth to me, and then 13 more children followed. In this book is tragic history of my family; or treasure of my life, as a wonderful thing is just began and you will see of the great give from God, I will stay humbled before God, that I never know him yet, but he has show me through and I will tell you in all the detail as much as I can remember from beginning to the end of my story; the great give and the glorious it had built up, that carry on in to the future, that I will be punishing as I have just began of my life; and in latter on, why I tell you all this, because this is the true story of my life!  But before I will have a hand out of glory from God, I have to pay the price what ever I owe from the passed life; that was the sign for me to take, but everyone born very different, and unique and purposed in life; I know that will be hard to beliefs the word I try to describe to you, because it not happen to you, and I have to accepted the consequence, I will loss all of my love one, and I had lift them be hide a lot more then you can image of lost the most of them are still very youths, included the journey I never dream off, far a way far enough that no where to walking back not even the car or train can go across the pacific Ocean, accept to flying with air plain, and I have to sacrifice my life for long time; until then people will understand what am I talking about?, and emotional moments that will show you what purposed of my life is about, the first time ever of living the Country” that was like for me growing up with, and escape from Laos Communist” to be in another the Country that called you an a refugee and no welcome sign of been there in that camp as a young mother, for that I had no idea why I even came this far no purposed no crude and lost everything I mean everything, no hope no where we can go from here, I though very hard how can we get out from the camp, that it just the first couple day of leaving the Country” I am cry like going to die, because I still remembered that before we have left him in Laos that night, my son start crying please don’t leave me mom dad please take me with you!  That was the last time I had seen him and his voiced it still remain hear it in my ears, and we did told him this we will be back son, we will be back soon, then we’ve left of my first born son, in January, 1981 and he will turn five year old in February 25 1981, if he doesn’t see his parent go back for his birthday than he will be crying again, and we just lifted him with my sister and brother in law, right near by the Mekong River in Vientiane LAOS” Since three days was passing by we have left Laos, that only thing I had been thinking about my first-born son, that I did not feeling well of been there at the camp, but I have only hope that one day my boyfriend can go back to get my first baby boy, until then I will not rest, that time I have asked my boyfriend about my son, when are you going to get Tout?  Tout is the nick name of my son, and the answer was just wait for a little while okay, You has been told me every day, same thing over and over again, what it’s I asked him again, he said just wait for a little bit, because we don’t have money to pay someone to get him, of cause, I did not know what to do about it, also we not only don’t have money to pay someone, but how can you trust people you not even know them?  And there it no ways, to go out by our self, to go get him, because the place we were stay it not normal for the tour rest, or you can have the freedom to speak, if you will wonder what it’s place?

You’re about to take an adventure from an Asian culture and its struggles to the land of opportunity in the United States!

This book captures the emotions and ways of life of for a young Laotian girl as she follows her destiny to become a successful American woman after years of struggling and fighting for her life, surviving in refugee camps and awful, abusive relationships. See what life was like in the 1960s through the ‘80s in the communist country of Laos, and learn what it was like to experience the freedoms and responsibilities of America, an utterly different world. If you know struggles, then you can relate to the raw emotions that this book entails.

• survival to the land of opportunity
• smile at adversity no matter how hard it is
• courage to stand up against abuse
• newfound freedom and adventure
• finding God and the man of my dreams!

Read this book if you have ever asked, “Will life ever get better for me?”

Deana escaped Laos along with her infant in 1981 and spent four years in refugee camps. After arriving in America, she learned English and became an American citizen. Her journey from Laos to America was full of struggles, but with God, anything is possible.