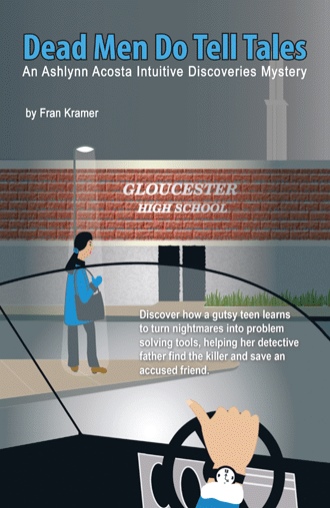 Everything happened so fast that Ashlynn couldn’t tell if it was a man or a woman. All she saw was someone in a hooded heavy jacket wearing large sunglasses, jeans and sneakers. She didn’t want to chase the person who she now heard, but could hardly make out, running among the brush and dried leaves in the direction from which they came—and up the hill just near where Chryssa would be walking!
Her heart pounding, Ashlynn waited a moment. As she craned her head around the boulder to see where the figure went, she stepped on something soft and squishy. She looked down and saw a dead bird. Next to it was a piece of heavy crinkled paper with some scribbled words written on it. Ashlynn remembered that on TV the detectives kept their gloves when touching possible evidence so she kept hers on as she picked up the paper. She didn’t want to taint the paper with her fingerprints! She read the words, “Beware, if you know what’s good for you! You could end up like this bird.” Ashlynn turned the paper over, and gasped, “Oh, no! It’s the photo I gave Chryssa!”
Shocked, and with shaking fingers, Ashlynn speed dialed Chryssa, who answered in a rather bored voice, “Hi, is that you? I’m not finding anything…”
“Chryssa,” Ashlynn whispered urgently into her phone, “come down the hill right now. Don’t go one step backward. Hide behind a rock if you hear someone coming!”
“What’s happening?” Chryssa anxiously cried out, hearing the fear in her friend’s voice.
“I’ll tell you when you get here. Be careful. And hide if you see somebody!” Ashlynn pleaded again.
“Okay, okay,” I’m coming,” Chryssa replied as she turned and stealthily moved through the brush and boulders, on the watch for any strange person. She kept the phone connection open to Ashlynn until she saw her friend’s head peeping out from behind the boulder in the distance. Chryssa scrambled down the remaining slope, trying not to slip on wet rocks and leaves. On reaching Ashlynn, Chryssa saw the dead bird and puckered up her face in a frown. Huffing and out of breath, she again asked, “What’s happening?”
“Like the shadow in my dream, we were being followed! I just saw a person take off over there,” Ashlynn said firmly, trying to imitate her father’s police voice and keep the anxiety out of her voice. He or she—I don’t know which— was apparently right behind me, but ran away when I heard a branch snap,” Ashlynn reported as she yanked her camera out of her backpack and took a photo of the bird on the ground. She then handed the crinkled note to Chryssa saying, “And this is what I found next to the dead bird! Keep your gloves on while you look at it.”
“Ashlynn,” Chryssa said in a shaky voice after she recognized the photo and read the note, “Where did I lose this? And who got it? This is getting scary! Maybe we better turn back!”
“We can’t. Not now! Besides, that person is probably behind us!” Ashlynn cried as she took the wrinkled photo from Chryssa and stuffed it into her pocket. “It is scary, but we must be on the right track or why else would we be given this note!” She then gazed in several directions and suddenly pointed ahead of her and said, “Look! Over there are two rocks jutting up together, again just like in my dream! Let’s go there.” Together, the two girls inched toward the large stones, anxious at what they might find. Would they spot the promised clue or would they encounter the mysterious person ready to jump out at them?

Thirteen-year-old Ashlynn Acosta recently learned that her dramatic dreams are gifts to use and that even the nightmares can be turned into problem-solving tools. Her intuitive skills are put to the test when she dreams about a murder before it happens. Ashlynn must find the true killer because she has unwittingly pointed a finger at her friend as the prime suspect!
Solving the crime is only the first mystery unfolding inside a greater mystery: how to use dreams to solve this crime. Ashlynn enlists the advice of a dream expert and a lady detective who gets clues from dreams, in addition to employing the usual detective’s tools of reasoning and observation.
Ashlynn finds eerily accurate dream clues—but not pat answers—that may help save her friend.
You can exercise your intuition in problem solving. Try Ashlynn’s intuitive methods detailed in the reader’s guide. You might find your inner sleuth!

Fran Kramer holds a MA in Asian Studies (Religion & Philosophy) and is an Intuitive Heart™ Trainer, certified by the Edgar Cayce Institute for Intuitive Studies. She is a member of the International Association for the Study of Dreams (IASD). With over 35 years of dreamwork experience, Ms. Kramer teaches about dreams and intuition at college, medical, church and community venues. She runs The Healing Dream Garden, LLC, where she explores the connections of dreams and intuition to energy and health with students and clients. She lives in Hawaii, sharing aloha among many culturally diverse friends and
three cats.