a letter to my children about family violence, sexual abuse, surviving and thriving 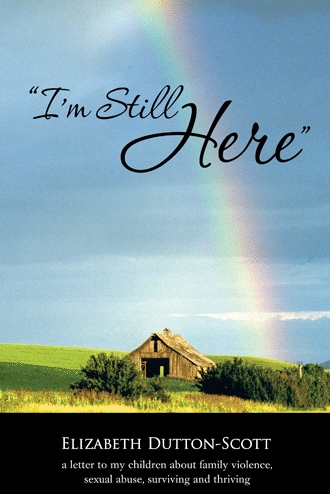 I began writing this book following my presentation to colleagues of Victim Assistance of the Medicine Hat Police Service, about family violence and sexual abuse based on my history. I wanted to address the question, why?
As I sat in front of the computer waiting for inspiration and the first words to type, my mind became cluttered with flashing images of dramas in my life and inexplicable feelings. Where do I begin? I had seventy-one years to sift through. Did I have anything worthy to say that hasn’t already been said? Will I hurt anyone? Would I remember the pain and feel violated again? Would there be a release from past emotions?
I could see chapter headings and parts of the activities in them, but remembering details in those segments was hazy and distorted. However, the message was the same: I had been abused, violated and dehumanized. I was sad, angry, confused, fearful, guilty, filled with shame and I survived.
I have lived with self-loathing and fear most of my life. I lived with fear of being hurt by perpetrators disguised as family, friends and lovers. I carried the heavy burden of guilt because I abandoned my children in so many ways when I was with them and after I left forty-four years ago. Perhaps, as I wrote, I would develop healthy feelings toward myself and self-reproach would vanish. It might be like crying; tears would eventually stop and reason and balance would arrive. I had to try because living this way was not living.
I thought of my children, who have not been a part of my life for more than twenty years. What had their father told them about me? I wondered what they told themselves about me and why I wasn’t a part of their lives. I wondered if they were angry and struggling with their own feelings and behaviours. I wondered if they had questions they found impossible to answer.
I decided to write to them through this book, this memory of my life and my understanding of how it has affected me and my behaviour and how I suppose it has affected them, based on the science of human behavior that I have read. Perhaps, I thought, others would see a part of themselves in my story and begin the journey to going beyond surviving to thriving. And hopefully, my story would give insight for the victim assistants and first responders of family violence and sexual abuse.
Once I committed to writing my story, I did not want to stop, no matter how it made me feel. This was a challenge, like so many I have had over the years and overcome. Maybe writing my story would reveal a sense of peace. My search for answers proved to be a long journey compounded by other traumas, more anguish and mental and emotional imbalances, creating a myriad of feelings and behaviours that ruled my life. They became part of who I have become. I was nine when I was in play therapy and much later I was in therapy sporadically through the years to the present time. I had managed to change some things about myself, but I just couldn’t get a grip on why the flashbacks wouldn’t stop.
Perhaps there was more to remember? Perhaps I just needed to understand how and why these things happened to me. Perhaps I had a sign on my forehead that said “abuse me”. I would learn how to answer those questions later in life.
I now know the harm brought to my children while living in a house of violence. A child in an angry home doesn’t have to see or hear the violence; it impacts them even if they’re in another room, when they’re sleeping or even when they are in their mother’s womb. Their young innocent minds and bodies absorb the tension before the beatings. Their bodies feel every blow and wonder when they will be beaten. My children didn’t have to hear the words their father screeched; they felt them. They could not articulate their feelings; they acted them. When I think back on how they behaved, they may well have been emotionally shut down. I’m certain Lynn was. Most times they were quiet, shy, obedient. They didn’t have that sparkle in their eyes.
There wasn’t any one person who created me. It was all the: abuses as a child; a father who was emotionally unsupportive; parents who didn’t teach me how to set boundaries and have respect for myself; social services that were thoughtless and didn’t show me a sustainable option; incorrect diagnosis of my mental condition; the unnecessary electro- shock therapy; incompetent doctors and therapists; lack of funds for real professional help; the lack of training to sensitize primary doctors and police; the lack of awareness by society; the lack of information on the effects of various forms of abuse available to the abused and family.
All these participants and issues became accomplices for the state of my mind and consequently, my behavior. In a sense I was groomed to be abused by a society that was ignorant and unwilling to talk about family violence and sexual abuse.
My life could have been measurably different had these things not happened. I would have become a different person and avoided the violence and self-abuse in my life and the loss of my children. I could have loved and respected myself. Life could have been healthier for me and for my children.
On the other hand, I would not have the awareness and compassion to support others going through the kind of pain I have endured.

I’m Still Here is the story of one woman who experienced the trauma and pain of child sexual abuse, sexual assault, and wife battering. She was seventeen when she married, and by the age of twenty-two, she had three children and was terrorized by her husband. She escapes the marriage after eleven tumultuous years but must leave two of her three children with their father, only to end up with a man who manipulates and dominates her. She leaves him, and years later lives with another abusive man. Elizabeth has to ask herself: why? What is it about her that draws her to abusive men? And why is her behaviour so troublesome to her?
Through several forms of therapy by many therapists and reading self-help books, she begins to understand her thinking, her behaviour, and her physical ailments from the time she was a child. Finally, in one year, she took a monumental step in self-awareness by writing her memoir, I’m Still Here. During research and writing this book, she discovers, the process has become a yearlong therapy session, and she is the client and the therapist. I’m Still Here helps her understand how her life experiences molded who she has become based on science and her life. And hopefully, my story will provide insight for those struggling with trauma from family violence or sexual abuse, and, for Victim Assistants and first responders.

Elizabeth Dutton-Scott is a retired registered massage therapist and licensed esthetician. She also worked as a radio broadcast journalist and story producer for the Canadian Broadcast Corporation in Toronto, Ontario. She is an artist, a traveller, an award-winning gardener, and a victim assistant volunteer. I’m Still Here is her first book.