Getting Help and Taking Charge of Your Healing 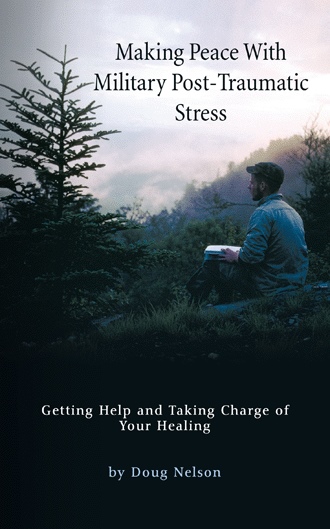 PTS is a sane person’s reaction to the insanity of combat and to the effects of war. “Post-traumatic” means after the fact. Vietnam veterans are still coming to terms with PTS forty years after they were in combat. From my claims work the past five years with people struggling with and in treatment for PTS, I believe we are among the most sane of people, that we are less, not more, likely to commit acts of violence. We have seen and experienced the violent and the insane. We are, generally, among the last to want to inflict violence on others. Very few of us take up hunting.
PTS can have its cause in a particular traumatic event, or it can stem from prolonged threats to life, such as combat. Personal assault often brings on PTS. The trauma of having been wounded or assaulted affects one’s sense of safety and security. The prolonged fear of trauma or of a repeat of a past trauma can bring on PTS.
We relive the event or events in some way. Some describe it as a tape that plays over and over again. Some of us see the event as we drop off to sleep or in our dreams. I know an Iraq veteran who plays back the video he shot from his truck, and looks for the wires he thinks he should have seen before the truck in front of him was hit by an IED. For some of us, it is not the actual event, but the situation in which it occurred. The truck driver who was constantly in fear of an attack on his convoy, and the base camp soldier exposed to repeated mortar and rocket attacks are frequent examples I encountered in my work. Many veterans have nightmares of being sent back to Vietnam; in the case of Iraq and Afghanistan, they may actually have experienced the nightmare of being sent back.
Most of us are “triggered” by sights, sounds, even smells. A hole in the ground reminds me of the hole our captain helped us dig before he was killed. Thumping sounds remind us of incoming rounds of enemy fire. Fireworks, or the smell of gunpowder, are common triggers for guys who were in infantry combat. Some of us cannot stand the smell of meat being broiled for reasons too terrible to relate.
We have trouble sleeping. Events or situations visit us in the night, when it’s quiet. We can drop off to sleep but awaken intermittently, or at some particular time. For me, it is 3AM. Some of us are easily startled by sudden noises, even such things as a dropped dish at home. We were conditioned by combat or by the dangerous situation to be on the alert, to be prepared if we have to fight off an attack, or to take cover from incoming fire.
A level of awareness, of hypervigilance, is necessary for combat, something people who have not been through this cannot imagine. A soldier feels he cannot be vigilant enough, cannot pay too much attention to his surroundings. One slip-up, one second of inattention, could mean the death of his buddy or himself. You must see the trip wire, the place where the ground just doesn’t look right, the sniper on top of a building.
Years later, the world is not a safe place any more—not your home, not your car. You were so intensely unsafe, or for so long a time, that you have lost the concept of safety. I know guys who prowl the house at night to be sure no one is trying to get in. I know of guys who take a driver cutting in front of them in traffic as a personal threat to their safety. I hiked the Appalachian Trail with a combat veteran who pointed out possible ambush sites and likely enemy bunker locations.
Every soldier knows it could be he who is killed or wounded tomorrow, or on the next mission, or one day before he is to go home. This is especially tough on folks who have been in prolonged or frequent combat. There is no end in sight; the missions go on, the laying of ambushes, the patrols, the firefights. Unlike those of us who were in Vietnam, young people are now serving multiple combat tours.
It is because of the profoundly violent nature of what we experienced that we have a tendency to expect disaster, confrontation, or a shortened life. I cannot stand to watch the crime stories on TV that my wife watches. She wants to see justice done; I do not need the reminder that the world is violent, and often unjust.
A reaction to what we experienced is to numb ourselves, so that we will not be hurt or triggered again. What we tend to numb ourselves against is both ends of the emotional spectrum, the funny, and the joyful, as well as the hurtful. I think that my Dad, a WWII combat veteran, struggled with PTS. I learned from him to keep a lid on it. What we also keep a lid on is friendships with other men. Much of the time I would rather be alone, with work or hobbies that keep me busy. I don’t want to be hurt again when I lose friends. A hiking buddy who was lost and died of exposure, veteran clients who died before their claims could be processed, and the loss of friends of my dad’s generation take me back to the loss of my captain in Viet Nam. I can isolate myself in my hurt and try to make sure I do not hurt or anger others.

A Vietnam veteran and career veterans’ counselor who struggles with post-traumatic stress (PTS) tells how to recognize the symptoms of PTS and how to begin the healing process. The veteran and those who care about him/her must understand that:
- he/she is not alone in this struggle
- and that he/she is not crazy.
Post-traumatic stress is a sane person’s reaction to intense or protracted violence. We learn to control the anxiety, hypervigilance and behaviors that tend to interfere with making a living, studying and social functioning.
Making peace with post-traumatic stress means understanding the nature of the beast that followed you home, and knowing what triggers PTS symptoms in you. Making peace means seeking help from Department of Veterans Affairs caregivers who will give you the tools to deal with PTS. The author tells you what to expect from VA Vet Centers, VA Mental Health Clinics, and the trained people who are there to help you.
Additionally, we find that we must make peace with those who love us, with the buddies we left behind, and even with ourselves. The author gives personal insights into these issues. He also draws from personal experience to give practical advice to younger veterans on job searches, education, family financial management, and the veteran’s role in the American political process.
Although money is not a cure for post-traumatic stress, the author walks you through the process of claiming PTS (and other conditions) as VA-recognized disabilities for VA compensation. Examples of stressor statement forms that resulted in successful compensation claims are provided. For Vietnam veterans, an appendix provides information on Agent Orange claims.

Doug Nelson is a veteran of the Vietnam War, and has worked with veterans for much of his public service career. He struggles with post-traumatic stress. As a Veterans Services Representative for the six years before his recent retirement, he was called upon to motivate veterans to seek help and to file VA compensation claims.