The Flip Side of Genealogy

by David A. Kendall PhD 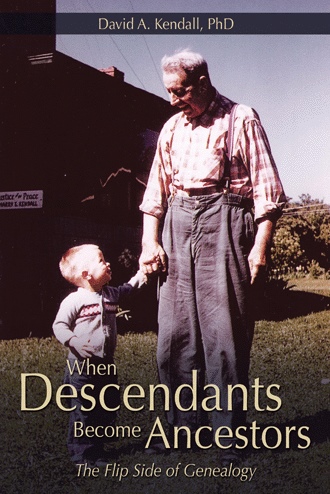 “Mattering” Matters
One of our most beloved movies, It’s a Wonderful Life, is shown yearly during the holidays. After a series of tremendous misfortunes, banker George Bailey wishes he had never been born and contemplates suicide. But an angel takes him back through life events in which he played a favorable part and which never would have happened if he had not been born. The recognition that his existence unknowingly played a very positive role in the lives of many people significantly changed his attitude toward himself and toward life. Only through this heavenly reexamination of his life was he able to reframe his existence from despair to joy.
Several years ago I witnessed a similar phenomenon with a former teacher of mine. At our 25th high school reunion in 1980 I took time to reminisce with my former Social Studies teacher, Clarence Katzmayer, a man whom I greatly admired and a major influence on my decision to major in the social sciences in college. Retired, and in the latter stages of life, this reserved and humble man had impressed me as much with his character as with his knowledge.
During our conversation I told him in some detail how appreciative I was for his substantial contribution to my life. He listened carefully and then sat silently for a moment before mumbling through misty eyes, “Thank you.” Nothing further was said for several minutes, as we both observed the festivities going on around us. I assumed that our conversation had ended and got up to leave when I felt his hand touch my forearm. He turned slowly toward me, looked warmly into my eyes and added, “You know, I’ve often wondered if I ever made any real difference to anyone I taught. You’ve just answered that question.”
It’s a sad commentary that so few ever express gratitude for the impact of others on our growth. With so little positive feedback it’s no wonder that our efforts often seem trivial and unrewarding. Mr. Katzmayer taught hundreds of students over the course of more than three decades and his name was often recalled with great affection when former students gathered together in years following graduation. Yet he apparently never knew how much he mattered until long after his retirement.
Is there anything more devastating than believing that our lives have not mattered, that our existence has had no meaning, that our time in this physical body has been wasted? Older people are sometimes accused of being “set in their ways,” unwilling to change, enamored with perceptions of the “good old days.” But the foundation of such behaviors may well be a passion to view one’s life as useful and meaningful. Admitting that we have been on the wrong path or have added little or nothing significant to mankind for several decades, and that life will soon be over, may be too much for some to bear. The way to avoid such despair may be to revel in the past, belittle the present, and ignore the future.
As with individual lives, species development is a process; and each life and generation is a vital part of that process. Rarely do people succeed at their first effort in acquiring a new skill. Human progress is no different. Each person in each generation adds a little bit more, and no one has the ultimate answer to our destiny. But we all contribute, knowingly or not. Wouldn’t it be better for all of us—the living and the yet-to-be-born—if we examined those contributions and deliberately passed them on?
In the previous chapter I asked, “What really matters?” The answer is clear: “mattering” matters, and it makes no difference who we are, what our age, how little we’ve accomplished, or how many horrendous mistakes we’ve made. We have lived, we are still living, and our life has mattered! Furthermore, we can use our understanding of that life to benefit our descendants. We must tell them how our lives have played out, so that we can become the foundations on which they can build their own. Making our lives count for something, making a difference, knowing that our lives have meant more than mere existence, believing that we have had, or are having, a positive impact on our little corner of the world—this proves to all that our time on earth has been fruitful.
Even if we have not received such feedback, or cannot accept that we have made important contributions to our world without such feedback, the opportunity still exists. Each of us has accumulated a lifetime of pragmatic wisdom and no one has interpreted life in exactly our way. Every person—no matter how rich or how poor, how white collar or how blue collar, how social or how reclusive, how moral or how immoral, how (you add the category)—has important stories to tell and important contributions to make to the lives of future generations.

An Excerpt from When Descendants Become Ancestors…

"Congratulations—you’re going to be an ancestor (someday). You cannot escape it. Nor can I. Nor can anyone else. That’s not necessarily a bad thing, depending on your beliefs about an afterlife, but each body ultimately ceases to exist. We all know that. From the moment of birth, each of us begins a journey that must ultimately conclude with our entrance into ancestry.

As we research our own ancestors and mourn the lack of information available to us, we forget that we are the future ancestors of our descendants. And if we don’t leave to them the kinds of information about our lives that we crave to know about our own forefathers, then we are merely perpetuating the problem."

How often have you regretted your failure to engage the elder generations of your family for information about their lives and memories? How many times have you wanted just one more hour with a deceased relative who could answer that one burning question that you suddenly thought about, and that no one else can answer? Perhaps you remember a time when an older acquaintance wanted to share with you some stories about “the good old days,” but you couldn’t be bothered.

Most of us have had regrets like these, as will our descendants—unless we seek to record and preserve some stories for their use. Whether our stories are short and simple or long and complex matters not, but these stories will become part of their heritage and can certainly influence their lives. Though our contributions may not be recognized for decades, our lives matter to future generations and our stories should be told. The rest is up to each of us.

Raised in a small tourist village in northern New York, where he has returned in retirement, Dr. Kendall spent thirty years educating professional counselors. His life experiences amid studies in history, genealogy, and gerontology, coupled with his belief in the innate wisdom of every individual, have inspired this writing.