The King by My Side

A Celebration of Love and Loyalty

by Kerry A. Loeffler 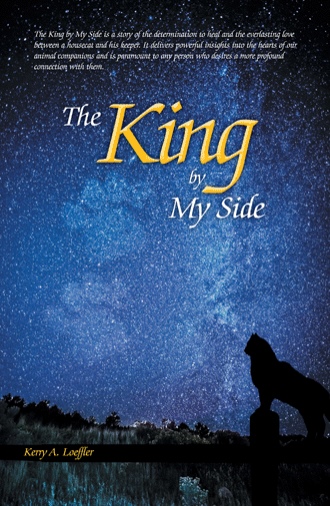 Our first energy session uncovered a surprising revelation about Moe. As I scanned his energy field, the area above his front paws blinked white flashes of light. “What’s this?” I asked.
Moe crossed one paw over the other. I uncrossed them gently. I looked closer and held my concentration. Next, I was hit by a wave of emotion. I made a move to caress the soft pads of his feet. At once, I understood what he was holding in this part of his energy field. There was anger and loss here. He missed his claws. Moe was extremely upset that they were taken from him. I hadn’t thought about this in years; I guess I assumed he had just accepted it. He hadn’t. It had been ten years since they were taken and he was still fuming. My friend had long been waiting to express his feelings about this to me.
There was a myriad of emotion swimming in the end of his paws. He felt violated. He was ashamed; in losing his claws, he had lost pride. His claws were once a source of power for him. Now the empty knuckles were a source of dishonor. He moved them away from me again, folding them under his body. I understood why he feared vets or any other person who sought to manipulate his body with or without his permission. After that, how could he trust anyone?
I fought to keep my tears from washing away my focus. Again, I was apologizing. “I’m sorry sweetie. I didn’t know they were going to do that to you.”
I asked my parents not to have him de-clawed. They did it while I was away at school, behind my back. If I could have stopped it I would have.
“You know I didn‘t want that for you, don‘t you?”
He said nothing. He closed his big green eyes and permitted me to stroke his toes. I felt an energy release from his center. He had released only what he was willing to. Forgiveness, sometimes, can only be granted in small doses. I ended our session and let him nap on the table.

The King by My Side is a message of enrichment and illumination that shatters barriers and opens hearts. King, an ordinary yet extraordinary housecat, exposes the truth that all animals feel, think, speak and experience life in much the same ways that humans do. King’s story delivers the gift of improved, enriched, and enhanced relationships with your animal friends. King reveals that you can look into your companion’s eyes and know that there is a beautiful, loving soul behind them who truly does adore you and is waiting for you to discover their genuine presence. That is a powerful revelation!

Kerry Loeffler has been an avid animal lover since early childhood. She is an Energy Worker, Massage Therapist and has a B.S. in Psychology. She currently resides in Bellvue, Colorado, with her two cats, Olive and Fineas. Her greatest joy is healing people and animals through connection to Source. Her passion and purpose bring truth to the world.