A holistic and social medicine perspective for healthcare providers 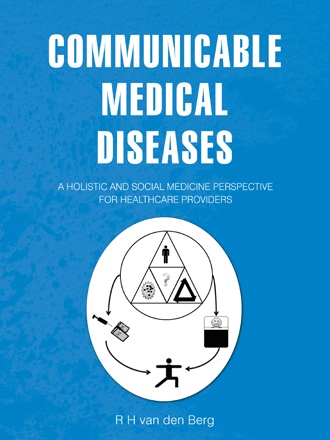 As a health and medical phenomenon, communicable medical diseases, just like all other medical conditions, have been known to humanity since the creation of man and the dawn of time. Regardless of the fact that communicable diseases have been declining as a cause of death in Europe and North America for nearly 150 years, communicable diseases are still the biggest killer in the developed, under-developed and developing world and are increasing at an alarming rate. Unknown and known communicable diseases continue to emerge or re-emerge due to drug resistance microbes, new patterns of travel and trade, new agricultural practices, altered sexual behaviour and the overuse of antimicrobial drugs. Economic, social, and political changes have weakened healthcare systems while enhancing the effects of poverty and malnutrition. Thus, instead of claiming that communicable diseases are in irreversible decline, it has to be stated that every major change in society, population, use of land, climate, nutrition or migration is a public health event with its own pattern of diseases (especially communicable diseases). Although the impact of communicable diseases on the health of humans (individuals, families and communities) has been reduced drastically over the past few decades (mainly because of the progress that has been made in the sciences of healthcare and environmental sciences), epidemics/pandemics can still occur on a large scale should the existing control regulations be relaxed. The resistance of certain pathogens against modern antimicrobial drugs heightens the possibility that communicable diseases can assume the magnitude of wide-spread epidemics and/or pandemics. Furthermore, modern means of transport today plays an important role in the spread of communicable diseases because communicable infections can now be spread within hours from one continent to another.

To depict the comprehensiveness, symbiosis and interrelatedness of the selected communicable infections, the book is divided in four (4) themes, namely:

• A discussion of "The Epidemiological Triad of Communicable Diseases” model in Theme I as the point of departure. The symbiotic and dynamic interrelatedness of the human host system, the environment and the pathogenic microbe (infectious agent) in the causation, prevention and control of communicable diseases is depicted as well as a description of all the characteristics/properties/attributes intrinsic to each element to be taken account of

• Depicting in Theme III on “The host as the adversary in the conflict". The discussion concern the body’s defence mechanisms against the entry of pathogenic agents into the body and the reaction of the body to the pathogen after invasion of the body had occurred. The body is protected by the innate and adaptive immune systems consisting of the natural protective barriers based on anatomical, biochemical and mechanical factors, the inflammatory response and phagocytosis, and the antibody-mediated and cell-mediated physiological immunological responses. After gaining entry into the body, the local as well as the systemic inflammation reactions develop in the body which are manifested in a general clinical way. Vaccination programmes to prime the adaptive immune system as well as the comprehensive, compassionate, holistic and culturally congruent fundamental healthcare to be rendered in hospital or at home are also discussed

• Discussing in Theme IV "Victory for the pathogen - the host has lost the battle" the epidemiology, pathogenesis and clinical manifestations of selected communicable diseases as well as the specific healthcare (excluding pharmacological prescriptions) to be rendered and the specific preventive and control measures to be taken. Attention is also given to the implication for disaster situations and international measures to comply with

Also, the book is endorsed by educators in Nursing Science and lay care givers

Communicable Medical Diseases: A Holistic and Social Medicine Perspective for Healthcare Providers is grounded in the integrated and unified biomedical and traditional models of healthcare. The phenomenon of communicable infections is depicted in a comprehensive, symbiotic, and interrelated way, as to enable all healthcare providers (professional, traditional, and lay care) to break the chains of interrelatedness between the human host, the pathogen, and the environment in preventing and controlling outbreaks of communicable infections at primary, secondary, and tertiary levels. Healthcare to be given at home and in hospital, being comprehensively, holistically, and culturally congruent, focuses not only on the care of individuals of all ages within familial and community contexts but also on caring for the family and the community. To prevent the human host falling sick from specific communicable infections, priming the individual’s immune system through vaccination so as to enhance his or her immune system is also discussed.

PhD in Nursing and MEd in Higher Education. Retired Associate Professor of Nursing Sciences at the University of the Free State. Author of a previous book on the same subject that became a best seller in South Africa. A scholar in culturally congruent healthcare.