Habits, Hosts and The Holy Ghost

Tales From A Catholic School Girl 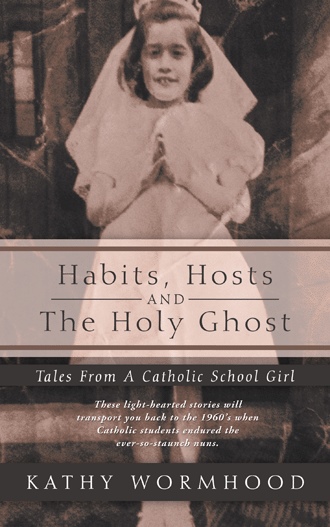 For as long as Maureen Mary Mulldoon could remember, her destiny was to become a Catholic nun. With rosaries recited, novenas said, and candles lit in her honor, her Irish family prayed for her dedication to the church. Maureen’s aspirations became not of marriage and children, but of life in the convent. But within a few short years at St. Timothy’s Catholic School, the shy, freckle faced girl with unruly red curls soon begins to recognize the shortcomings of religious life. She finds the nuns’ black dresses hideous, the giant swinging rosary beads cumbersome, and the nuns’ somber personalities downright scary. The Sisters of the Blessed Sacrament could scare any adult, and when they belittle Maureen, critique her hair, and question her quiet disposition she begins to fill with guilt and shame. Maureen dreads parochial school, until she befriends Steven O’Hara. O’Hara the Scara brings an element of unpredictability, energy, and outspokenness that can only hail from a long bloodline of troublemakers. His courageous pranks cause Maureen to be both repelled and attracted to this devious boy. Over the years, Steven and Maureen develop a love/hate relationship and by the time they graduate the eighth grade, they realize their true affection for one another. At its heart, Habits, Hosts and the Holy Ghost captures long forgotten memories of attending a Catholic school in the 1960’s. The stories are based on actual events experienced by the author and her fellow classmates. It is true confirmation of the humorous yet life changing experiences of anyone who might have heard about or survived the teachings of Catholic nuns.

As a student that attended eight years of Catholic school, from 1963 to 1971, I have first hand experience of the staunch Catholic nuns.

A life-long Catholic, I carried the experiences of those school years with me - as well as the memories of guilt, shame and fear the nuns tried to instill in me. Now as an adult, I can reminisce and look back on those years with laughter.

An avid writer of fiction, memoir and poetry, I am a wife, mother and recent grandmother. I live and work in sunny Clearwater Fl.