How to Survive the Worst That Can Happen

by Sandy Peckinpah & With Melissa Gilbert 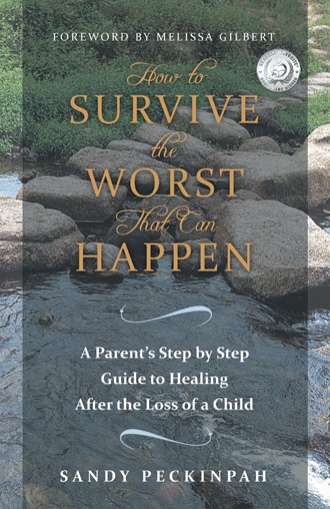 Each section offers insight and stories borne from my own journey of recovery, along with extensive research, my volunteer work helping other parents and siblings through bereavement, and insightful therapists who enlightened me on this quest to discover the stepping stones to learning how to live life with such a tragic loss.
You may find shades of yourself within these chapters, uncovering feelings, fears, sorrows, and truths you’re discovering. At the end of each section is a series of exercises. I call them “Stepping Stones” to your recovery. I urge you to begin them…at least promise yourself that you will begin the journal.
By participating fully in the exercises is the quickest road to finding balance and recovery in your life.
In this workbook style format the odyssey of grief shifts from one of passive submission into active recovery.
While reading the story and working the steps you will actively pursue reclaiming your joy, and ultimately, you will triumph.

Sandy Peckinpah’s sixteen-year old son woke up with a fever and was dead the next morning of bacterial meningitis… her life changed forever. She found herself in the depths of unimaginable despair. Then, someone gave her a journal, and writing opened her journey of self-discovery in learning how to live life without her beautiful child. Words illuminated her path of discovery and she began to document the things that helped her, and others like her, to find resilience. This is a practical, inspirational guide to coping with the many facets of bereavement; learning how to talk about your loss, the aftermath of sorrow, handling fear and anger, helping your living children adjust, strengthening your marriage, experiencing miracles, and the promise that you will regain a quality of life where you’ll feel joy once again. If you’ve lost a child or know someone who has, this story is one you’ll relate to and find comfort in knowing you’re not alone. Sandy is a mother who has experienced it, and she’s a Certified Grief Recovery Specialist® from the Grief Recovery Institute® in Los Angeles.

Sandy Peckinpah is on a mission to help heal your past, transform your future, and “breakthrough to happy.”
She discovered the power in storytelling when she was inspired to write her first book, Rosey . . . the Imperfect Angel after the birth of her daughter. Julianne was born with a severe facial defect, a bilateral cleft lip and gum. It would take numerous surgeries to repair her face and through the process Sandy and her family learned the beauty of imperfection.
The fairy tale caught the attention of news media throughout the country. Sandy and her daughter appeared on national television talk shows (including ABC, NBC and Fox), radio programs, and in newspaper articles and magazines throughout the U.S. It helped raise awareness about children born with this disfiguring, but repairable, birth defect.
Rosey . . . the Imperfect Angel was recorded as a CD, produced by Tony Award Winner, Michael Alden, who also wrote the music, recorded by the Moscow Symphony Orchestra. It starred the voice of actress and former SAG President, Melissa Gilbert, best known for her portrayal as Laura Ingalls in Little House on the Prairie. The CD made it all the way to the Grammy Ballot in 2009!
Her second book, Chester the Imperfect All Star, followed with the same media attention. Her fairy tales continue to bring enlightenment, wonderment, and hope to children and are used in schools, hospitals, and clinics to raise awareness and help children with self-esteem.
Story telling and fairy tales were a predominate theme in Sandy’s life. She worked closely with her late husband, David Peckinpah, who was the executive producer and writer of numerous television series including the Emmy nominated CBS series Beauty and the Beast, Sci-Fi’s Sliders, and USA Network’s Silk Stalkings, along with numerous television movies and the Disney box office hit, Man of the House. Sandy ran the operation of their film company, including developing ideas, storylines, and editing scripts, and also worked as an actress in television movies and series.
She collaborated with life-long friend, noted San Francisco interior designer Paula McChesney to write Passion by Design, a blueprint for designing and living a life of passion. With Paula, she co-hosts the radio show, Passion By Design, on AM Talk Radio in California (Past shows can be downloaded on iTunes).
Sandy tragically lost her oldest son at the age of 16 from Spinal Meningitis. Her book How to Survive the Worst that Could Happen was inspired by her own intimate story, woven with her research and experience to offer a book that shifts the odyssey of grief from one of passive submission into a faster, active recovery. In the process, she learned how to help others rise up from life’s most challenging and difficult transitions. In 2014, she became a Certified Grief Recovery Specialist® with the Grief Recovery Institute® in Los Angeles.
Book Awards: