Book One of God Bonded America a Trilogy

by Michael W. Weaver & Will Scott 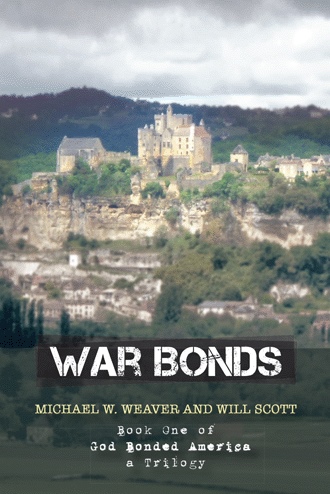 Scene #1 …… in the Senate, the smell of fire pierced the senators’ noses, and then smoke clouds surrounded them. Senator John Grady of Philadelphia quickly warned the senators, and they began ripping their desks loose from the wooden floors and carrying them out. The representatives did the same in the House chamber. Once outside, the desks were placed on the capitol grounds under trees and then covered……. ….. Flames shot from the roof over the lieutenant governor's chamber, where the fire had originated. The people began shouting when they realized that they were able to get there from their homes but the fire department had not yet arrived. When the firefighters did finally get there, the first thing the hose crews did was walk around the capitol, assessing the blaze…… The fire licked through the roof of the capitol. In numerous places, flames skipped about like burlesque dancers. At last, the fire companies started spraying water on the roof of the Senate wing, which seemed fruitless, as the fire had grown into a wall of flames, with embers of hot ash floating to the ground close to the spectators. To add to the mayhem, the water hardly had enough force to reach the roof’s edge….. Much of the water was evaporating from the flames and heat, but what was falling back to the earth was turning into ice on that cold February morning. .… The roof quickly collapsed into the building, and the fire rapidly ate its way down into the Senate chambers. Scene#2 As promised, the staircase took them into a large room with a high ceiling. Just as they started toward the open doorway, a German soldier walked right into the open arms of Benji, who drove his picker straight through his chest. Carver reached quickly to cover the German’s mouth. They slid him into the doorway, making him a floor mat that everyone had to walk over. Two other guards were in the room with their backs to the group. Carver signaled to Benji that he would go for the one on the left; Benji was to take out the one on the right. They headed out, and just as Carver was reaching for one guard, the other guard caught a glimpse of him. He turned to shoot Carver but saw Benji bearing down on him. Carver took his guy out with a quick twist and snap of his neck, but Benji had to throw the pig sticker at the other German guard because he already had his gun out. The pig sticker was a perfect bull’s-eye in the center of the guard’s chest bone. The problem was that the guard got one round off before collapsing, and it blasted a large hole in Benji’s right kneecap at close range. The prisoners had all swiftly entered the large room by then, and Jack simply pointed at the short doorway through which they were to escape. Scene #3 Garfield’s physique told everyone that he had not run any five-mile sprints since the Spanish-American War. His abdomen hid the buckle on his belt from sight. His waistline was larger than average, but he seemed not to even have a butt. His hair was as white as a New England snowstorm……. He said to Jack, “Morning, Junior. Did you get up today with your hair on your head?” Jack said, “Excuse me, sir. I don’t understand what you’re asking me.”…… Later in Garfield’s office …… Command Sergeant Major. Good morning, sir. How are you?” Arthur Garfield said, “I may have been better, but I don’t remember when. And you, young man? Did you wake up with both ears on?” Jack said, “Sir, about your jargon—I don’t understand it. Where are you from?” Arthur Garfield said, “I’m from a lot of places, mostly round east overshoe, about three buckles up. To you flatlanders, that really means I’m a Green Mountain Boy and proud of it.… “If my history’s right, ah … oh … It’s on the tip of my tongue. Oh, oh, ah, dagnabbit … Oh, oh, oh, oh, oh, ah, it’s about Ethan Allen going back to the … crap … damn … ah, the American Revolution, right?” “I know you can speak gooderer English than that,” Arthur Garfield responded. “Maybe your tang got tongulled around your eyeteeth, and you couldn’t see what you’re saying. Or maybe it’s worse. Maybe you put the emPHASis on the wrong syLAble. Scene #4 Jack smiled and tried to humor Winnie by saying, “Honey, it’s our honeymoon….. ...After a while, Winnie said, “I need to head to the little house out back even though it’s still raining.” She took a lantern and headed out. She …. was infuriated. “Darren is lucky he isn’t here; he would be singing soprano in the choir next week.”…….. “A damn bucket of corncobs was all that was there.” Jack started laughing…. Winnie found no humor in it. ……looking in every cupboard…..he finally found…..bathroom tissue with a note…….“Sis, are you having fun yet?” ……Prior to that moment, Jack had never heard Winnie swear, but now she said,….. As she was unpacking the food from the baskets….. every can label was gone. “You will be having ‘guess what’s for your dinner’ every night…….. Winnie cut up an apple and a banana. She said, “Well, here goes. I’m opening a can of whatever you are having with your snack…… “It’s smoked oysters in a mustard sauce.” She fought back tears and said, “The gags just keep on coming… … They were getting to the point of consummating their marriage. Winnie, being a lady, was putting on her mildly suggestive nightgown……. Jack, on the other hand, was a man’s man and just stripped to his boxer shorts…… he pounced onto the bed with all his weight. Apparently, Darren had cut every rope on the rope bed within a shred of being cut in two….. Jack and the mattress crashed to the floor…..

“War Bonds” is part novel, part history book, part mystery, part love story – in other words, a book to satisfy just about anyone who loves a good read. With a cast of rich and likeable characters, the writers weave a tale of intrigue and suspense. This is the story of how two unlikely friends – Jack and Russ – thrown together during one of history’s greatest battles – not only survive, but also live to collaborate yet again on an even greater endeavor. In a God-directed journey through the United States and beyond, Jack and Russ – with their humorous and stubborn wives always standing by them if not with them – discover for themselves the principles on which our founders based this nation. Some of the discoveries they make and the dreams they dream confound them and us, the reader, but be patient. The surprise ending will be worth the wait! Strap on some curiosity, some courage and some perseverance – and join Jack and Russ on the trip of a lifetime! —Carolyn Kimmel, journalist

Michael Weaver is a lifelong resident of Pennsylvania, except for his years in the United States Air Force. Weaver was born in 1954, and he grew up in Camp Hill, a small town west of the capital city of Harrisburg, Pennsylvania. Dealing with dyslexia before much was known about it, he wasn’t very interested in reading and writing. Ultimately, however, Weaver became consumed by local Civil War history. Since then, he has been on the board of directors of a local Civil War historical society and was three-time chairman of local Civil War reenactments. He is currently the president of another historical society he founded in 2005. In his younger years, he participated in Civil War reenactments in six different states with an artillery unit; however, age has sidelined him from those events. Though a Christian, Weaver is not currently active in a church. For several years, he has been searching for a church where he feels comfortable. After being self-employed for over twenty years in the home construction and remodeling business, Weaver found it necessary to change professions due to back and knee injuries. He then went to college and got an associate’s degree in business. He accepted a sales position in the lumber industry but soon found that that was not a good fit. Therefore, he turned to his new found hobby—now his passion—history. He decided that he wanted to author a book, so he started researching and gathering historic information about the Civil War. Initially, Weaver used his spare time in the evenings and on weekends to write books. To date, he has written and published five books, with this being the sixth. The second book of this trilogy, Bonded Wings, is well on its way to completion. Other writings by Michael Weaver TITLE ISBN YEAR Jenkins in Mechanicsburg - The Confederate Attempt on Pennsylvania’s Capital 0-9716490-0-6 2000 Captain John Bigelow – More Than Just a Civil War Hero at Gettysburg 0-9716490-1-4 (paper back) 2002 Captain John Bigelow – More Than Just a Civil War Hero at Gettysburg 0-9716490-3-0 (paper back) 2002 Pennsylvania Civil War Snippets for Curious Minds 0-9716490-4-9 (out of print) 2003 Student Activity Workbook to accompany “Snippets” 0-9716490-5-7 (out of print) 2004 The Life and Times of Mahlon Haines – The York, Shoe House (Available for sale only in the gift shop of the Shoe House, Hellam, PA) 0-9716490-8-1 2007 Will Scott is also a lifelong resident of Pennsylvania, growing up in New Cumberland, about twenty minutes southwest of Harrisburg. Born in 1961, he grew up in a very religious family and attended church regularly. Ultimately, Scott became extremely involved in church life. He has taught Sunday school and been on church Property and Search committees He is active in projects and volunteers hours to the needy by making repairs to their homes. Scott has also followed in God’s walk as a missionary by going to Alaska to help build a church. Scott and his wife started a newspaper, Good News Daily, which is no longer in production. His journey in construction and his work on the newspaper, coupled with his rich religious connection with God, found Will feeling ongoing signs from God to put together a book based on a journey in the name of God. Scott needed help with this project, as he had never written a book. He feels that God directed him to Weaver. Scott went to trade school and got an associate’s degree in home construction. He has been successfully self-employed since 1981 in the home construction and remodeling business, having built several homes a year for many of those years. Other writings by Will Scott: Good News Daily; a Christian newspaper - 2004 - 2008