'Whatever Happened to George?'

After all, it is only our thoughts that separate us from each other, and a place of everlasting love 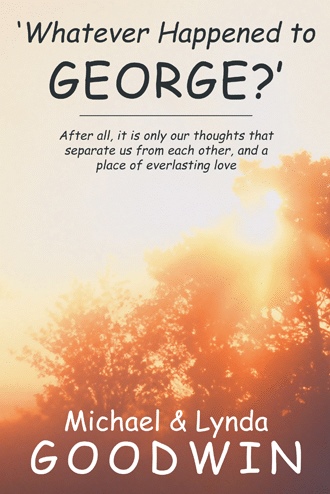 'It is said that man's greatest treasure lies buried beneath his greatest fear. But who has the strength to look?'

An air of musky scent filled the vast recesses of the Library, a scent that seemed to hang everywhere; along the corridors, across the perfectly bound volumes neatly stacked upon the dark wooden shelves, down to the polished lattice of oaken flooring, stretching outwards and beyond where distance could not be recognised by human eyes. Drifting softly through the silence of the great hall, it lingered pleasantly around the perfectly arranged furniture of rosewood and mahogany, melting into the natural light that binds the Library to a place of serenity, a place of peace and comfort, knowledge and truth. Here, a mind could relax within a shelter where time had stopped; a retreat where silence was enough for everything the senses wanted to know.
George sat upright in the deeply upholstered crimson velvet chair, gazing incredulously across the vast, endless area of books. Row upon row, shelf upon shelf, higher and higher to a point of unrecognizable blur; longer and longer, to disappear over the horizon of his sight.
He inhaled deeply. Was it vanilla or jasmine, rose petal or gardenia? For a moment, his sense told him it was his mother's perfume. He remembered coming home from school and opening the door, her scent waiting to welcome him. Then the aroma changed to chestnuts roasting sweetly by the fire, baking endlessly in the ashes and glowing embers of Christmas Eve. An excitement filled his heart with the memories of Christmas past; roast turkey and stuffing, party hats and his father's sherry he so longed to taste.
It was all here, the smell of the garden in summertime; the lavender and mint, lilac and honeysuckle. Delicate fragrances filled his head with startling memories of distant days full of laughter and good friends, now gone their own way to experience the call of life. He could hear their voices whispering softly in the great silence. How he yearned to see their faces, touch their hands and laugh with them again.
Slowly placing his hat onto the beautifully grained table in front of him and smoothing his hands over his thinning hair, George took another deep breath, his heart pounding to the beat of his childhood years. He stared around, glancing upward again and across to the countless volumes set in flawless position on each shelf.
Where was he? What was he doing in this place of books, sweet smells and memories from his childhood? Why could he hear distant voices from the past echoing through his head, breaking the silence with their calls from yesterday? He was dreaming. In a moment he would wake up . . . . . this room had to be a dream; a library full of dreams and strange sounds. He could feel his heart pounding, his chest rising and falling to the laboured flow of his breath.
Closing his eyes again, he tried to calm down, but his thoughts now regressed back to the time when he was a young man with great expectations of life to come. He could feel, once again, the freshness of youthful enthusiasm rising inside, and his thoughts shifted to Phoebe; to the first time he knew she was the one.
He remembered touching her hand and holding her close as his heart danced, making him dizzy with desire; walking hand-in-hand across fields of wild flowers, climbing rocks and shouting from the tops of hills. He could see their wedding day, hear the vicar pronounce them man and wife, taste the wine and hear the loving words spoken by friends and family. It was everything he had ever wanted; it was for ever . . . . . it was love.
George blinked open his eyes and shook his head, bringing his focus back into the Library, a sense of disbelief overwhelming him. All these experiences happened years ago . . . . . but here, he could feel them as if they were happening now, within this room of books. He wiped at his eyes and blinked again, desperately trying to make sense of it all . . . . . and then, with abrupt realisation, he remembered the accident. He knew the car had hit him . . . . . but how could this be? Surely it was a dream.
He checked his body and legs, they were fine . . . . he could move . . . . he had no pain . . . . it must have been a dream. But he was here, this wasn't home and certainly wasn't a hospital. Again, he clearly recalled the collision . . . . and then the darkness.
He was dead. No two ways about it, George was dead.
But no . . . . . he was alive. His eyes told him he was alive. Every sense told him he was very much alive. He slowly gazed around the Library, confusion consuming his every thought.
It was only this morning he had set off to the meeting. This morning he and Phoebe had been together, talking, getting on with life. Only last night they were making plans, so easy with each other, so intense with their grumblings.
George slumped back into the chair as his memories washed over him . . . . . . . .

George has been brought up within the old traditional values of working hard for a living and getting on with life, no matter what it may throw at you. The problem is life is not being very kind to him at the moment: he is getting older, out of work and the demands of family life are pushing him to the edge of despair. He feels anxious and depressed and can’t seem to look forward to anything that can make him feel better.

Then, one day, he finds himself on his way to a job interview with a promise that it could be just what he needs to turn his life around. As he rushes to cross the busy road to catch his train, he is helplessly hacked down by a speeding car driven by a seventeen year old drop-out.

George’s story continues as he wakes up in strange surroundings: an old Library containing the knowledge of the universe. It is within this place of ‘no time’ but ‘all time’ that he looks around believing he is ‘dead’ but yet ‘not dead’ . . . and then the strangest of occurrences takes place. He is confronted by a voice that speaks to him of his true destiny; a voice that gives reason to a world that has become confused and lost within the false identity that has created it.

He is astounded as a friendship is pulled together, and the big fundamental questions of who we truly are and our purpose upon the earth are revealed to him in a series of conversations and reflections that lead him towards peace, forgiveness, the relinquishment of fear and finally to know that life can be ‘happy’ on the earth plane, when the ‘false self’ that has held us tightly in its grip for thousands of years is finally released.

George is fascinated by the voice that holds all the answers to a freedom that has been long lost, but, even more astonished to know that the voice is his own . . . . . his own ‘true self’.

Let us introduce ourselves. We are Michael and Lynda Goodwin and for many years now we have been following the feelings of our hearts which have taken us to a greater depth of knowledge and spiritual enlightenment. It has been through this personal evolution that the writing of 'Whatever Happened to George?' was inspired, with the greatest of wishes to help develop the light of spiritually in others.

With consideration for the natural changes that Mother Earth is bringing about and with the lighter energies from the universe already upon us, it is our great desire to assist in the exciting spiritual revolution in the best way we know how.

We made the choice to retire from work at a relatively early age, now being 60 and 59 respectively, and have recently moved home to the Yorkshire Dales National Park. Michael is a keen amateur musician and lyricist, Lynda's passion is painting, especially in oils. Walking and exercising has become part of our daily routine. We have been married for 28 years and have one daughter and two granddaughters.